Mobile is changing the way people experience content - including advertising. Every time they reach for their devices, they expect to find what they are looking for and be engaged, and they quickly look elsewhere if their experience is poor. In this environment, publishers must take new approaches to advertising to grow revenue. More than ever before, advertising experiences need to be relevant and respectful of the user’s context in the moment.

At DoubleClick, we’ve been investing heavily to help publishers address this challenge. With DoubleClick Ad Exchange, we’ve built programmatic technologies that scale advertising to wherever users are, in the moments that they’re most likely to respond. We’ve also developed mobile-first, immersive ad formats to keep users engaged and ensure advertiser goals are met. Today we’re excited to bring these two areas of investment together for our DoubleClick customers with programmatic support for native and video formats on mobile.

Earlier this year, we announced support for native formats in DoubleClick for Publishers. Now we’re also enabling publishers to sell native ads programmatically, both in the open auction and in private marketplaces, on DoubleClick Ad Exchange. This is available now in apps and will roll out for cross-screen native ads over the next few months. Beta testers of these features, including eBay, have already experienced strong results.

As a pioneer in the programmatic space, eBay recently rolled out its Native Mobile Programmatic solutions, which have revolutionized the way brands deliver their message to the right person, at the right time. Since the launch of its new native ad unit, eBay is seeing a 3.6x increase in ad engagement on average, with some campaigns delivering click-through rates up to 5%.

“We’re focused on leveraging DoubleClick’s technical footprint to bring scalability to our native mobile programmatic offering,” says Brian Brownie, Director of U.S. Display Operations & Programmatic Advertising at eBay. “Our success with desktop private marketplaces, backed by eBay insights, has unlocked massive client adoption and this next phase of mobile delivery is a continuation of the effort.” 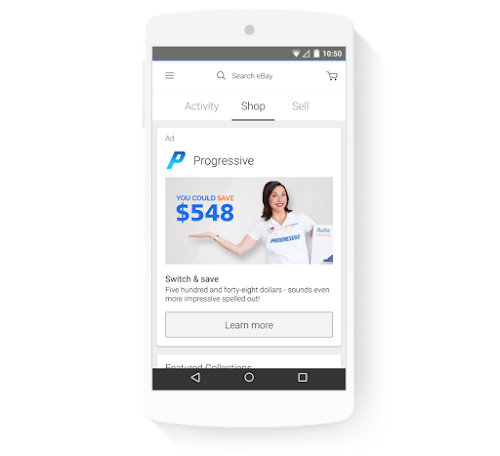 "The eBay Native in-app offering has a very powerful combination of attributes — high quality inventory, programmatic access and a cross-channel audience at a scale few can match,” says Michael Collins, CEO of Adelphic, a leading mobile and cross-channel DSP. “These attributes combine to give brands a unique and high-impact opportunity for their advertising investment, especially in the upcoming holiday season.”

Along with native ads, we’re also introducing programmatic support for mobile video interstitials in apps on DoubleClick Ad Exchange. Video is key to driving brand impact in the moments that matter, no matter where they occur. With these new immersive, full-screen video ads available programmatically, again in both the open auction and in private marketplaces, publishers can offer their advertising partners a new way to bring engaging brand experiences to users seamlessly, driving advertiser performance and growing publisher revenue. During beta tests, publishers realized gains as high as 30% CPM in interstitial video compared to regular interstitial performance.*

Together, these innovations help address a strong demand from ad buyers for native and mobile video formats that can be bought programmatically.

"We've been a longtime supporter of DoubleClick’s programmatic solutions for mobile,” says Adam Foroughi, CEO and Co-Founder of AppLovin Corporation. "The Native and Mobile App Video ads on AdX are in high demand among our buyers and have shown strong performance both for advertisers and publishers. We're happy launch partners with DoubleClick on these new initiatives."

As the digital world around us continues to shift, these innovations are just some of the ways we’re helping publishers and advertisers adapt to changing consumer preferences and thrive.

Source: eBay Ad Serving Reports, in-app home screen placements, FY 2015.
*There are many factors that impact video demand on a publisher's app and experiences may vary.