Nearly 60% of smartphone users expect their favorite apps to look visually appealing1. We’ve always believed that in-app ads can enhance an app’s overall experience by being well designed. So today we’re announcing a completely new look for our interstitial in-app ad formats - also known as full-screen ads - that run on apps in the AdMob network and DoubleClick Ad Exchange.

Inspired by Material Design, the new app install interstitial comes with a beautiful cover photo, a round install button, and matching color schemes. Technology called “color extraction” makes the ads more consistent with the brand's look and feel -- we extract a dominant color either from the cover photo or app icon and apply it to the footer and install button. We found that having a greater variety of designs and colors can improve conversion rate.

Other features include the app’s rating, and a screenshot gallery which appears when a user taps ‘More images’, so users can learn more about the app without leaving the ad. 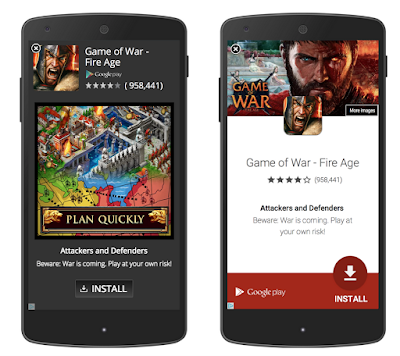 The previous design for our app install ads on the left, and our new version on the right.

Different examples of color matching.
Our app install formats have driven more than a billion downloads across Android and iOS. You can use these new designs automatically when you run a mobile app install campaign on the AdMob network in AdWords. That’s right, no extra work required!

Next, our new text-based ads are easier to read, and contain a larger headline and a round call-to-action button that clicks through to a website. 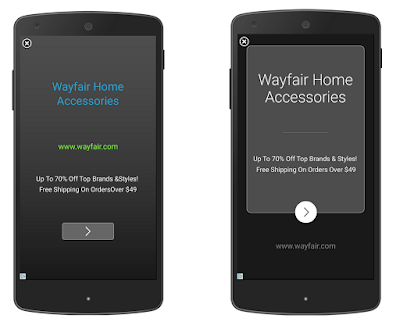 On the left, the previous text ad interstitial design, and the new version on the right.
As with other ad format innovations, our ads UI team test multiple designs - ten in this case over the course of a year - to find final versions that increase clicks and conversions for advertisers, and a positive experience for users. Both app install and text ad formats appear within the app and can be closed easily, so users can return to what they were doing with a single tap.

As we announced at Google I/O this year, the volume of interstitial impressions has more than doubled across AdMob since last July, so now’s a great time to get your business in front of more app users.

If you’re a developer looking to learn more about earning with in-app interstitial ads in your app, visit AdMob now. These new designs will also be available to developers monetizing their apps with DoubleClick Ad Exchange.