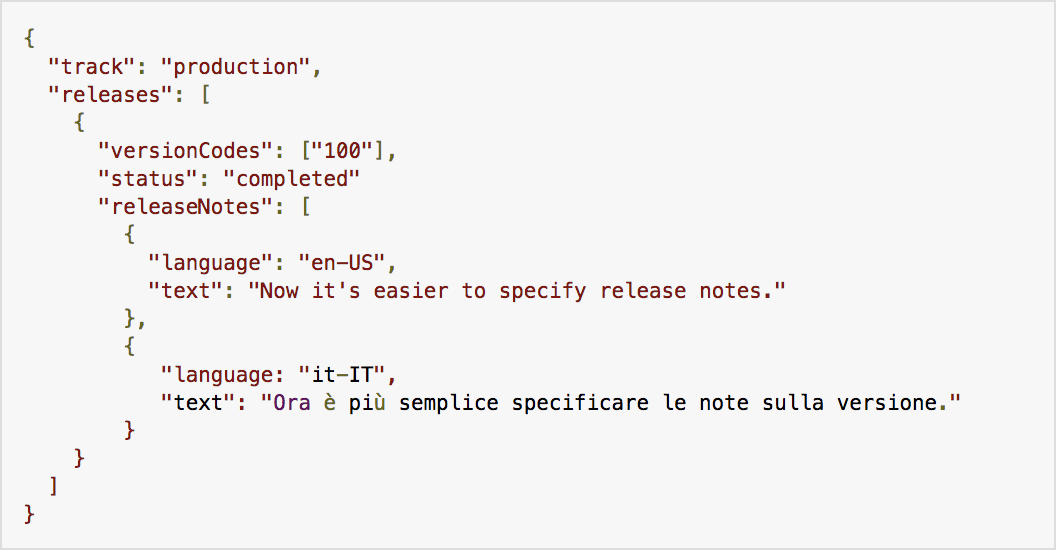 At Google I/O we shared how Google's own apps make use of Google Play for successful launches and updates and introduced the new Google Play Developer Publishing API Version 3.

The Publishing API enables you to integrate publishing operations into your existing release process or automated workflows by providing the ability to upload APKs and roll out releases. Here's an overview of some of the improvements you can now take advantage of in Version 3 of the API.

Releases in the API

The Publishing API now uses the release model you are familiar with from the Play Console.

This gives you full control over releases via the API allowing a number of operations which were previously available only in the Play Console. For example, you can now control the name of releases created via the API, and we have now relaxed the constraints on what can be rolled out via the API to match the Play Console.

The API now supports releasing to any of the testing tracks you have configured for your application as well as the production track. This makes it possible to configure your continuous integration system to push a new build to your internal test track as soon as it's ready for QA.

Staged rollouts are the recommended way to deploy new versions of your app. They allow you to make your new release available to a small percentage of users and gradually increase this percentage as your confidence in the release grows.

Staged rollouts are now represented directly in the API as inProgress releases.

You can now halt a staged rollout via the API by changing its status to halted. This makes it possible to automatically respond to any problems you detect while performing a rollout. If it turns out to be a false alarm, the API now also allows you to resume a halted release by changing its status back to inProgress.

Release notes are a useful way to communicate to users new features you have added in a release. In V3 we have simplified how these are specified via the API by adding the releaseNotes field to release.

We know that while many developers are comfortable deploying test builds automatically, they like using the Play Console when rolling out to production.

So, in the V3 API we have added the ability to create and manage Draft Releases.

This allows you to upload APKs or App Bundles and create a draft release from your continuous integration system, and then have your product manager log in, check that everything looks good, and hit "Confirm and Rollout".

We hope you find these features useful and take advantage of them for successful launches and updates with Google Play. If you're interested in some of the other great tools for distributing your apps, check out the I/O sessions which have now been posted to the Android Developers YouTube Channel.