Every month, more than a billion users come to Google Play to download apps for their mobile devices. While some are looking for specific apps, like Snapchat, others come with only a broad notion of what they are interested in, like “horror games” or “selfie apps”. These broad searches by topic represent nearly half of the queries in Play Store, so it’s critical to find the most relevant apps.

Searches by topic require more than simply indexing apps by query terms; they require an understanding of the topics associated with an app. Machine learning approaches have been applied to similar problems, but success heavily depends on the number of training examples to learn about a topic. While for some popular topics such as “social networking” we had many labeled apps to learn from, the majority of topics had only a handful of examples. Our challenge was to learn from a very limited number of training examples and scale to millions of apps across thousands of topics, forcing us to adapt our machine learning techniques.

Our initial attempt was to build a deep neural network (DNN) trained to predict topics for an app based on words and phrases from the app title and description. For example, if the app description mentioned “frightening”, “very scary”, and “fear” then associate the “horror game” topic with it. However, given the learning capacity of DNNs, it completely “memorized” the topics for the apps in our small training data and failed to generalize to new apps it hadn’t seen before.

To generalize effectively, we needed a much larger dataset to train on, so we turned to how people learn as inspiration. In contrast to DNNs, human beings need much less training data. For example, you would likely need to see very few “horror game” app descriptions before learning how to generalize and associate new apps to that genre. Just by knowing the language describing the apps, people can correctly infer topics from even a few examples.

To emulate this, we tried a very rough approximation of this language-centric learning. We trained a neural network to learn how language was used to describe apps. We built a Skip-gram model, where the neural network attempts to predict the words around a given word, for example “share” given “photo”. The neural network encodes its knowledge as vectors of floating point numbers, referred to as embeddings. These embeddings were used to train another model called a classifier, capable of distinguishing which topics applied to an app. We now needed much less training data to learn about app topics, due to the large amount of learning already done with Skip-gram.

While this architecture generalized well for popular topics like “social networking”, we ran into a new problem for more niche topics like “selfie”. The single classifier built to predict all the topics together focused most of its learning on the popular topics, ignoring the errors it made on the less common ones. To solve this problem we built a separate classifier for each topic and tuned them in isolation.

This architecture produced reasonable results, but would still sometimes overgeneralize. For instance, it might associate Facebook with “dating” or Plants vs Zombies with “educational games”. To produce more precise classifiers, we needed higher volume and quality of training data. We treated the system described above as a coarse classifier that pruned down every possible {app, topic} pair, numbering in billions, to a more manageable list of {app, topic} pairs of interest. We built a pipeline to have human raters evaluate the classifier output and fed consensus results back as training data. This process allowed us to bootstrap from our existing system, giving us a path to steadily improve classifier performance. 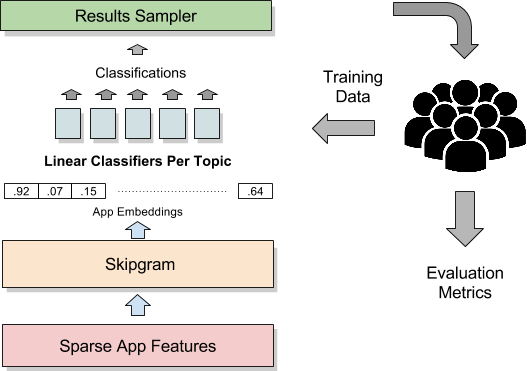 To evaluate {app, topic} pairs by human raters, we asked them questions of the form, “To what extent is topic X related to app Y?” Multiple raters received the same question and independently selected answers on a rating scale to indicate if the topic was “important” for the app, “somewhat related”, or completely “off-topic”. Our initial evaluations showed a high level of disagreement amongst the raters. Diving deeper, we identified several causes of disagreement: vague guidelines for answer selection, insufficient rater training, evaluating broad topics like “computer files” and “game physics” that applied to most apps or games. Tackling these issues led to significant gains in rater agreement. Asking raters to choose an explicit reason for their answer from a curated list further improved reliability. Despite the improvements, we sometimes still have to “agree to disagree” and currently discard answers where raters fail to reach consensus.

These app topic classifiers enable search and discovery features in the Google Play Apps store. The current system helps provide relevant results to our users, but we are constantly exploring new ways to improve the system, through additional signals, architectural improvements and new algorithms. In Part 2 of this series, we will discuss how to personalize the app discovery experience for users.

Acknowledgments
This work was done within the Google Play team in close collaboration with Liadan O'Callaghan, Yuhua Zhu, Mark Taylor and Michael Watson.