Earlier this year, in response to strong customer demand, we announced that we were expanding region support for MongoDB Atlas. The MongoDB NoSQL database is hugely popular, and the MongoDB Atlas cloud version makes it easy to manage on Google Cloud Platform (GCP). We heard great feedback from users, so we’re further lowering the barrier to get started on MongoDB Atlas and GCP.

We’re pleased to announce that as of today, MongoDB will offer a free tier of MongoDB Atlas on GCP in three supported regions, strategically located in North America, Europe and Asia Pacific in recognition of our wide user install base.

The free tier will allow developers a no-cost sandbox environment for MongoDB Atlas on GCP. You can test any potential MongoDB workloads on the free tier and decide to upgrade to a larger paid Atlas cluster once you have confidence in our cloud products and performance.

As of today, these specific regions are supported by the Atlas free tier:
To get started, you’ll just need to log in to your MongoDB console, select “Build a New Cluster,” pick “Google Cloud Platform,” and look for the “Free Tier Available” message. The free tier utilizes MongoDB’s M0 instances. An M0 cluster is a sandbox MongoDB environment for prototyping and early development with 512MB of storage space. It also comes with strong enterprise features such as always-on authentication, end-to-end encryption and high availability, as well as monitoring. Happy experimenting! 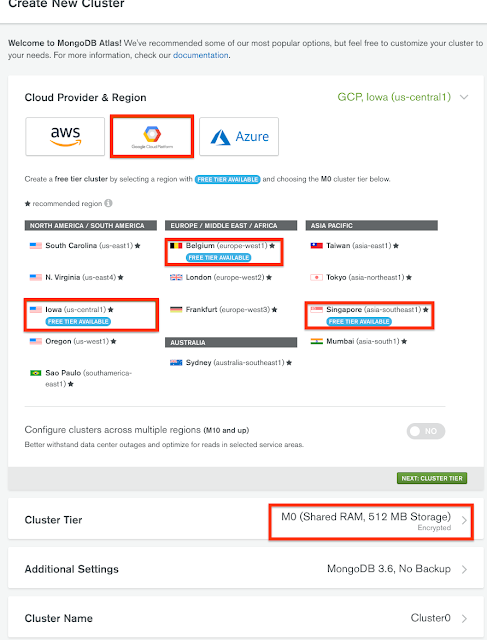