CPU-based machines in the cloud are terrific for general purpose computing, but certain tasks such as rendering or large-scale simulations are much faster on specialized processors. Graphics Processing Units (GPUs) contain hundreds of times as many computational cores as CPUs and are great at accelerating risk analysis, studying molecular binding or optimizing the shape of a turbine blade. If your CPU-based instance feels like a Formula One race car but you’re in need of a rocket, you’re going to love our new cloud GPUs.

Early in 2017, Google Cloud Platform will offer GPUs worldwide for Google Compute Engine and Google Cloud Machine Learning users. Complex medical analysis, financial calculations, seismic/subsurface exploration, machine learning, video rendering, transcoding and scientific simulations are just some of the applications that can benefit from the highly parallel compute power of GPUs. GPUs in Google Cloud give you the freedom to focus on solving challenging computational problems while accessing GPU-equipped machines from anywhere. Whether you need GPUs for a few hours or several weeks, we’ve got you covered. 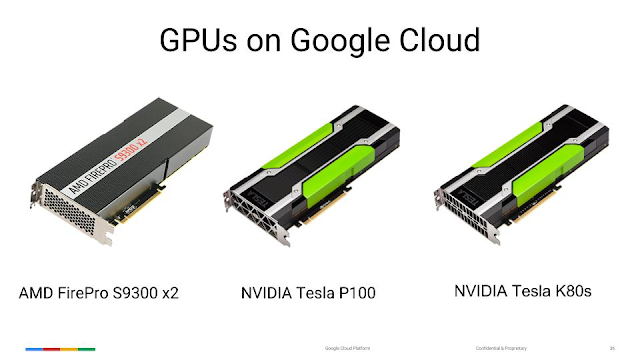 Google Cloud GPUs give you the flexibility to mix and match infrastructure. You’ll be able to attach up to 8 GPU dies to any non-shared-core machine, whether you’re using an n1-highmem-8 instance with 3 TB of super-fast Local SSD or a custom 28 vCPU virtual machine with 180 GB of RAM. Like our VMs, GPUs will be priced per minute and GPU instances can be up and running within minutes from Google Cloud Console or from the gcloud command line. Whether you need one or dozens of instances, you only pay for what you use.

During an early access program, customers have been running machine learning training, seismic analysis, simulations and visualization on GPU instances. Startup MapD gets excellent results with a GPU-accelerated database.

"These new instances of GPUs in the Google Cloud offer extraordinary performance advantages over comparable CPU-based systems and underscore the inflection point we are seeing in computing today. Using standard analytical queries on the 1.2 billion row NYC taxi dataset, we found that a single Google n1-highmem-32 instance with 8 attached K80 dies is on average 85 times faster than Impala running on a cluster of 6 nodes each with 32 vCPUs. Further, the innovative SSD storage configuration via NVME further reduced cold load times by a factor of five. This performance offers tremendous flexibility for enterprises interested in millisecond speed at over billions of rows."


The Foundry, a visual effects software provider for the entertainment industry has been experimenting with workstations in the cloud.

"At The Foundry, we're really excited about VFX in the cloud, and with the arrival of GPUs on Google Cloud Platform, we'll have access to the cutting edge of visualization technology, available on-demand and charged by the minute. The ramifications for our industry are enormous."


Tell us about your GPU computing requirements and sign up to be notified about GPU-related announcements using this survey. Additional information is available on our webpage.