The Android Support Library is a collection of libraries available on a wide array of API levels that help you focus on the unique parts of your app, providing pre-built components, new functionality, and compatibility shims.

NestedScrollView is a ScrollView that supports nested scrolling back to API 4. You’ll now be able to set a OnScrollChangeListener to receive callbacks when the scroll X or Y positions change.

The Media Router Support Library is the key component for connecting and sending your media playback to remote devices, such as video and audio devices with Google Cast support. It also provides the mechanism, via MediaRouteProvider, to enable any application to create and manage a remote media playback device connection.

In this release, MediaRouteChooserDialog (the dialog that controls selecting a valid remote device) and MediaRouteControllerDialog (the dialog to control ongoing remote playback) have both received a brand new design and additional functionality as well. You’ll find the chooser dialog sorts devices by frequency of use and includes a device type icon for easy identification of different devices while the controller dialog now shows current playback information (including album art). 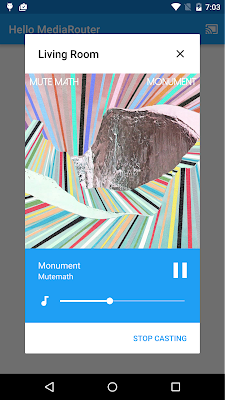 To feel like a natural part of your app, the content color for both dialogs is now based on the colorPrimary of your alert dialog theme:

RecyclerView is an extremely powerful and flexible way to show a list, grid, or any view of a large set of data. One advantage over ListView or GridView is the built in support for animations as items are added, removed, or repositioned.

This release significantly changes the animation system for the better. By using the new ItemAnimator’s canReuseUpdatedViewHolder() method, you’ll be able to choose to reuse the existing ViewHolder, enabling item content animation support. The new ItemHolderInfo and associated APIs give the ItemAnimator the flexibility to collect any data it wants at the correct point in the layout lifecycle, passing that information into the animate callbacks.

Note that this new API is not backward compatible. If you previously implemented an ItemAnimator, you can instead extend SimpleItemAnimator, which provides the old API by wrapping the new API. You’ll also notice that some methods have been entirely removed from ItemAnimator. For example, if you were calling recyclerView.getItemAnimator().setSupportsChangeAnimations(false), this code won’t compile anymore. You can replace it with:

One component of the AppCompat Support Library has been in providing a consistent set of widgets across all API levels, including the ability to tint those widgets to match your branding and accent colors.

This release adds tint aware versions of SeekBar (for tinting the thumb) as well as ImageButton and ImageView (providing backgroundTint support) which will automatically be used when you use the platform versions in your layouts. You’ll also find that SwitchCompat has been updated to match the styling found in Android 6.0 Marshmallow.

The Design Support Library includes a number of components to help implement the latest in the Google design specifications.

AppBarLayout supports a number of scroll flags which affect how children views react to scrolling (e.g. scrolling off the screen). New to this release is SCROLL_FLAG_SNAP, ensuring that when scrolling ends, the view is not left partially visible. Instead, it will be scrolled to its nearest edge, making fully visible or scrolled completely off the screen. You’ll also find that AppBarLayout now allows users to start scrolling from within the AppBarLayout rather than only from within your scrollable view - this behavior can be controlled by adding a DragCallback.

NavigationView provides a convenient way to build a navigation drawer, including the ability to creating menu items using a menu XML file. We’ve expanded the functionality possible with the ability to set custom views for items via app:actionLayout or using MenuItemCompat.setActionView().

The Percent Support Library provides percentage based dimensions and margins and, new to this release, the ability to set a custom aspect ratio via app:aspectRatio. By setting only a single width or height and using aspectRatio, the PercentFrameLayout or PercentRelativeLayout will automatically adjust the other dimension so that the layout uses a set aspect ratio.

The Custom Tabs Support Library allows your app to utilize the full features of compatible browsers including using pre-existing cookies while still maintaining a fast load time (via prefetching) and a custom look and actions.

In this release, we’re adding a few additional customizations such as hiding the url bar when the page is scrolled down with the new enableUrlBarHiding() method. You’ll also be able to update the action button in an already launched custom tab via your CustomTabsSession with setActionButton() - perfect for providing a visual indication of a state change.

Navigation events via CustomTabsCallback#onNavigationEvent() have also been expanded to include the new TAB_SHOWN and TAB_HIDDEN events, giving your app more information on how the user interacts with your web content.

The Leanback library makes it easy to build user interfaces on TV devices. This release adds GuidedStepSupportFragment for a support version of GuidedStepFragment as well as improving animations and transitions and allowing GuidedStepFragment to be placed on top of existing content.

You’ll also be able to annotate different types of search completions in SearchFragment and staggered slide transition support for VerticalGridFragment.

Palette, used to extract colors from images, now supports extracting from a specific region of a Bitmap with the new setRegion() method.

For an in depth look at every API change in this release, check out the full API diff.