Today, version 3 (v3) of the Google Drive API is available, providing developers with a leaner, faster by default, and more consistent interface to Google Drive. This latest update is designed to be easier for developers who are integrating with Drive for the first time.

In the time since we launched the original version of the Drive SDK, we’ve learned a lot about how developers are using our API and the pitfalls they’ve encountered. This version simplifies the API in several ways, including:

For example, our files.list call now only includes the most commonly used fields that we serve efficiently by default, with additional fields able to be added via the fields parameter. This makes the default call nearly 6X faster in v3 than in v2: 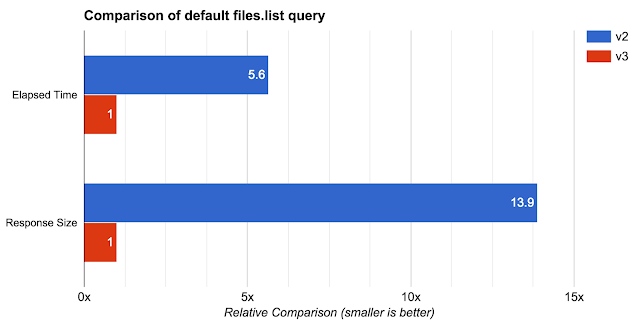 While future versions of the API will be more feature-focused, this release provides improved performance and ease of use over the previous version of the API (v2). We will continue to support both versions so that existing apps using v2 can run without changes (developers don’t have to upgrade). For developers with a v2 app who want to take advantage of the new improvements, we’ve got a handy cheat sheet to help with migration.

To get started using the new version of the API, check out the developer docs; and for any questions, find us with the google-drive-sdk tag on StackOverflow. We look forward to seeing what you’ll build with the new API!