The Oscars are just days away—which means movie fans are locking in their predictions, nominees are putting the finishing touches on their red-carpet looks, and we’re ready to name the most popular movie trailer on YouTube.

May we have the envelope, please ...

Our special-edition YouTube Movie Trailers Leaderboard ranks the top performing Best Picture nominee trailers, including both studio channels and popular aggregators. This year, the nine trailers are all blockbusters, racking up 3M hours of watch time.1 That’s the equivalent of about 25M viewings of the Oscar-nominated animated short, “Borrowed Time.”

The most popular trailer came right down to the wire. And the winner is … “La La Land,” which took home the #1 spot on our Leaderboard, followed closely by “Arrival” and “Hacksaw Ridge.”1 Head over to Think with Google to see how the other Best Picture nominees fared.

While the best picture nominees span a variety of genres, superhero trailers are the most viewed according to new research on the movie space on YouTube from third party researcher Pixability. Superhero trailers have the highest average number of views per video,2 and superhero, animated, and science fiction trailers make up 74 of the top 100 most viewed trailers.2

Pixability also found that while trailers are the most popular type of movie content on YouTube,2 songs (both official clips and covers by fans) are actually the most engaging type of movie content.3 Movie musicals like “La La Land” are certainly having their day in the sun—and YouTube viewers are singing right along.

Case in point: “La La Land” is running away with the competition for YouTube views among the nominees for Best Original Score, with over 1 billion views of its music, both in clips of the movie and covers by fans.4 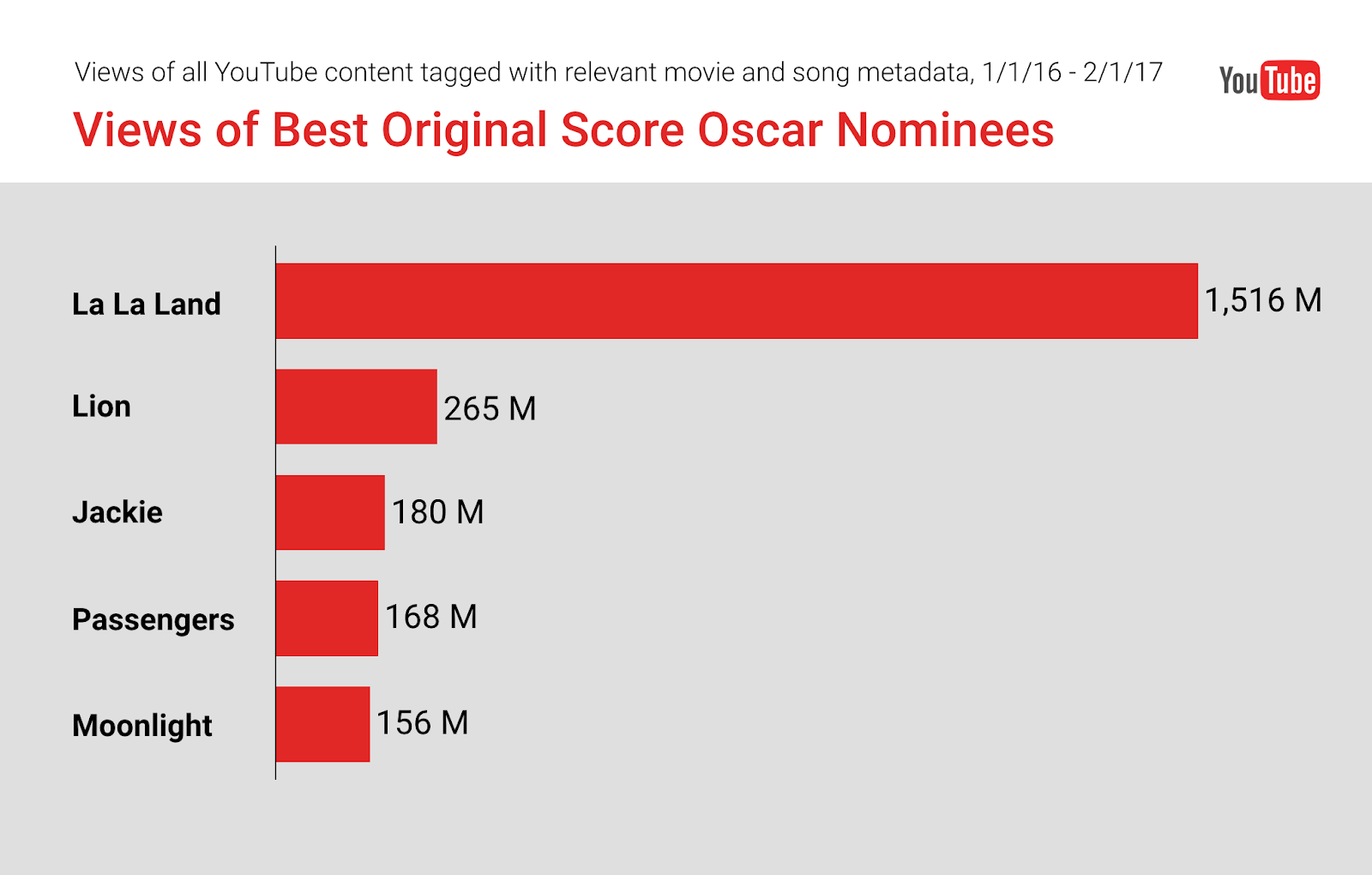 Google News Lab looked at trailer trends from another angle entirely: geography. Think you can guess which movie trailers were most popular on the coasts? West Texas? The Pacific Northwest? Take a look.

Before the winner is crowned on Sunday, pop some popcorn and don’t forget to take a spin through all the top Best Picture trailers over at Think with Google.

Sources
1 The YouTube Movie Trailers Leaderboard includes views on videos from some of the most popular trailer aggregators as part of our count. Ranking is determined by an algorithm that factors in paid views, organic views, and audience retention (how much of a video people watched) through 2/13/17. Trailers must be for movies nominated for Best Picture and included the top performing trailer for each nominee. YouTube global data, 1/1/16-2/13/17.
2 Pixability, “Movies on YouTube,” February 2017. “Most popular” is based on number of videos and views.
3 Pixability, “Movies on YouTube,” February 2017. “Most engaging” is based on total likes, comments, and shares. Songs refers to music and lyric videos of either full movie soundtracks or songs attributed to a top movie.
4 YouTube data, 1/1/16–2/1/17.