Earlier this year, I had the chance to travel to India to see how people there were enjoying YouTube up close. While in Nagpur, I met a young man who loved using YouTube to watch WWE wrestling and wanted to show us his favorite video. But after he found it and tapped to play, the video just wouldn’t load. Maybe it was his phone or his 2G connection, but it just wouldn’t work.

Unfortunately, this story isn’t an exception for our Indian viewers. They love YouTube and its amazing selection of Bollywood hits, comedy vlogs, cricket matches and—yes—even wrestling. But even as they discover the joys of YouTube, their experience is not great on slower connections and less powerful mobile phones.

We’ve always believed that connectivity should not be a barrier to watching YouTube. In 2014 we launched YouTube Offline so you could watch videos without suffering from buffering. A few months ago we rolled out Smart Offline, a feature that allows you to schedule videos to be saved offline later at off-peak times, when there’s more bandwidth so data is faster and cheaper. But we realized that for the next generation of YouTube users to fully discover all that YouTube has to offer, we had to reimagine the YouTube mobile app from the ground up.

That’s why I and a team of engineers, designers, and researchers have been travelling to India, collecting ideas and testing prototypes with hundreds of people across 15 cities. They’ve helped us build a brand new YouTube app that’s faster, more relevant, and more affordable, with innovative new features.

Meet YouTube Go: a new YouTube app built from scratch to bring YouTube to the next generation of viewers. YouTube Go is designed with four concepts in mind. It’s relatable, with video recommendations and a user interface that is made for you. The app is designed to be offline first and work even when there’s low or no connectivity. It’s also cost-effective, providing transparency and reducing data usage. And finally, it’s a social experience, connecting you with the people and content you care about. 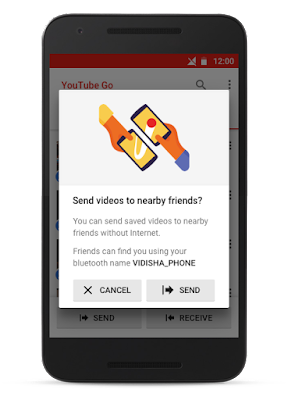 The new preview function shows you what to expect before choosing to save or play the video, and in which resolution. You can also share videos to friends nearby, without using up any data.

Here are some of YouTube Go’s most notable features:
We’ll gradually roll out YouTube Go to more and more people over the next few months, getting their feedback and improving the product before launching it widely early next year. If you'd like to be among the first to find out when the app is ready, you can sign up at youtubego.com/signup.

Johanna Wright, Vice President of Product Management, YouTube, recently watched ”How To Be a Ninja - EPIC HOW TO.”