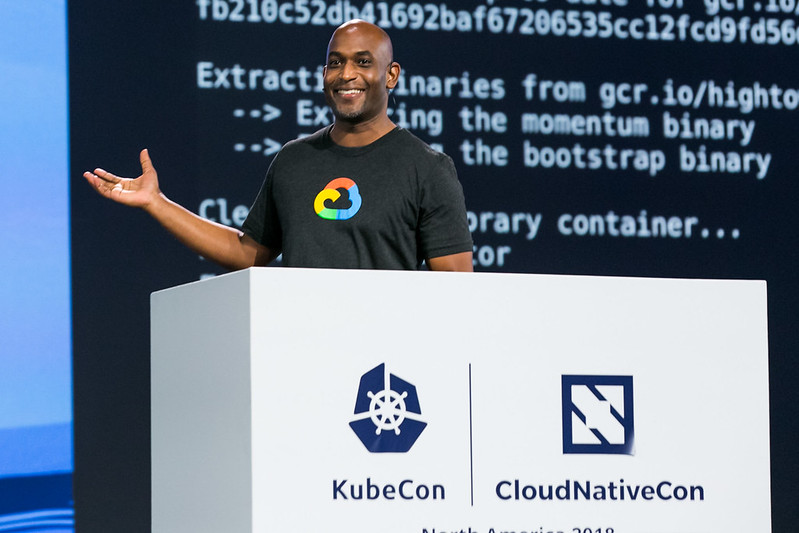 It's hard to believe it was just five years ago Googlers decided to open up Kubernetes to the world, partnering with Red Hat, and eventually many others, to build a community that would reshape the world of infrastructure. Kubernetes' impact has been accelerated by an incredible 35,000 contributors, who give their time to make the project a cornerstone of cloud native computing, and the center of three huge events a year around the world.

First of all, let's take a moment to celebrate the project that started it all, and wish the Go programming language a happy 10th birthday! As Kubernetes co-founder Joe Beda pointed out in 2014, Go is "Goldilocks for system software", and has been foundational to Kubernetes' success.

How about this: "Kubernetes' success is in part due to Go and the Go community. Go hits the sweet spot for distributed systems software. It is low enough to do the job but high level enough to attract a thriving community."
— Joe Beda (@jbeda) June 29, 2018

Since Kubernetes' adoption of Go, it has become known as the language of the cloud. Most of the projects you'll see this year at KubeCon are built with, or are compatible with, Go. And the Go community is a vibrant ecosystem in its own right: over the last ten years it has grown to see over 20 conferences a year, as well as 2,100 contributors. Read more about the history and evolution of Go in these 10th birthday blog posts from Russ Cox and Steve Francia.

Come join us in celebrating Go's birthday during the booth crawl, from 6.40pm to close on Tuesday November 19! Sweet treats will be served, meet with some of the Go team and other enthusiasts. 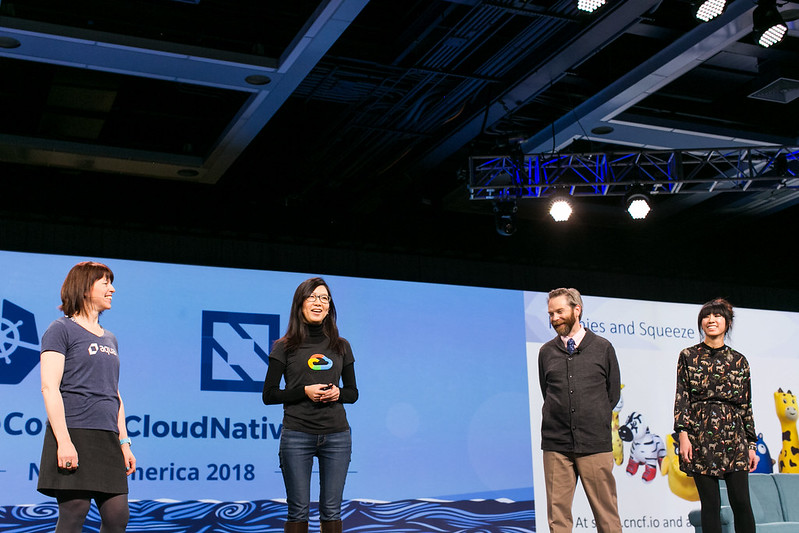 KubeCon is a great chance to learn about the many open source projects that Google has founded or contributes to, and meet face-to-face with our engineers and community leaders. We want to hear about your use cases, meet with contributors (aspiring or experienced!), and connect with the whole community. Google's participation in the conference is not limited to technical talks. In fact, we sponsor and participate in many important community gatherings like the Diversity Lunch+Hack, and project governance like the Steering Committee and Technical Oversight Committee. We recognize and care about fostering a healthy, inclusive environment that extends far beyond just technology concerns.

Of course, Kubernetes is at the center of the conference. And, Google is deeply committed to the Kubernetes ecosystem, including creating and contributing to sub-projects such as kubebuilder, kustomize, KIND, and krew, as well as building testing infrastructure and fostering a community that inspires the whole world of open source. We're still here and still trailblazing. Come and talk with us at the community lounge, attend our talks and tutorials throughout the week, and drop in on hallway discussions galore!

gRPC, developed at Google and donated to CNCF, is a modern, open source, high-performance RPC framework that can run in any environment. Use gRPC to efficiently connect services in and across data centers with pluggable support for load balancing, tracing, health checking and authentication. Meet some of the gRPC maintainers, connect with the community, and pick up the latest limited edition PanCakes sticker at the Community Lounge on Wednesday!

Knative is an open source serverless platform hosted on Kubernetes. It abstracts away much of the complexity, allowing developers to focus on their code and build highly scalable, secure stateless applications. Knative codifies the best practices shared by successful real-world implementations, and solves the "boring but difficult" parts of deploying and managing cloud native services on Kubernetes.

Knative recently cut their 10th release of the project, providing a stable v1 API for the serving project, and additional work to enable production-readiness. Meet some of the maintainers and learn more about Knative in a hands-on workshop on the Monday November 18.

Istio is an open source service mesh, providing observability, control and security over communication in a distributed application -- running on Kubernetes or on VMs. Started in 2017 by Google and IBM, and reaching 1.0 in 2018, Istio has developed a vibrant community. Over the last 12 months, more than 600 developers from across 125+ companies have committed PRs! GitHub acknowledged this recently, reporting that Istio is in the top 4 of all projects across GitHub for contributor growth for committed PRs! The most recent quarterly release was Istio 1.4, which featured scalability and performance improvements as well as greatly improved experience for getting started.

Kubeflow is dedicated to making deployments of machine learning (ML) workflows on Kubernetes simple, portable and scalable. The community is building a powerful development experience for data scientists to build, train and deploy from notebooks, as well as the enterprise capabilities ML operations teams rely on to deploy and scale advanced workflows in a variety of infrastructures. The Kubeflow project is supported by 180+ contributors from 25+ organizations.

Kubeflow just released v0.7, featuring beta functionality for the Kubeflow 1.0 release, expected in early 2020. Learn how Kubeflow is being used and built in the 17+ talks featuring the project in the Machine Learning + Data track. If you're getting started, attend our Kubeflow OSS Hands-On Workshop on November 18, 1-3pm. Connect with the Kubeflow maintainers attending KubeCon by following @kubeflow.

Agones is an open source, multiplayer-dedicated, game server scaling and orchestration platform built for Kubernetes. Google founded the project in early 2018, along with Ubisoft, and recently Agones reached its 1.0 release milestone. It is being used in production for several games, with more to come!

If you're a game developer or just interested in non-traditional Kubernetes workloads, please join us for a workshop on Monday November 18, where we'll combine forces with our sibling project Open Match to turn a Kubernetes cluster into a game services backend. We're very excited about the future of open source and game development, and invite you to join us Tuesday morning in the Google Cloud Community Lounge for an open source in gaming meetup!

Krew makes it easy to discover and install kubectl plugins. Initially developed at Google, and now a Kubernetes subproject, over 60 open source kubectl plugins are distributed through Krew, and can be installed with a single command. Learn more in our breakout session, and come and talk about Krew in a Community Lounge Q&A session.

KIND makes it easy and cheap to test Kubernetes locally with Docker container "nodes". Started in the Kubernetes SIG-Testing group, this project has flourished and is now used for testing Kubernetes Pull Requests and many subprojects in the ecosystem including kubeadm, CSI, Istio, and Cluster API. KIND v0.6.0 will release before KubeCon, and the team will be presenting a deep dive and running a workshop on contributing to Kubernetes using KIND.

Envoy is a fundamental building block of service mesh architectures, providing a programmable data plane for services. Service mesh helps deploy multi-cloud applications and microservices at scale, by decoupling applications from networking, and service development from operations. Google is a lead contributor to the Envoy project, a critical part of Google Cloud's enterprise-grade service mesh products such as Anthos Service Mesh, Traffic Director and L7 ILB. We are excited to be a sponsor for EnvoyCon on Monday November 18, and would love for you to join us for an intro to Envoy on Thursday November 21.

OpenTelemetry provides the best way to capture metrics and distributed traces from your applications. Google is one of the founders of OpenTelemetry, and the community has grown to include most major monitoring, APM, and cloud vendors. OpenTelemetry is fully supported by the Google Cloud Platform and Stackdriver. Hear more about OpenTelemetry in the KubeCon keynotes, and go deeper in the overview and advanced breakout sessions.

Tekton defines reusable building blocks on Kubernetes for Cloud Native CI/CD. In March Tekton was donated to the CDF (the Continuous Delivery Foundation), and is being developed in collaboration with companies such as Red Hat, IBM, Cloudbees and other friends.

With the first release of Tekton Triggers and Tekton Pipelines, it's now possible to create an entire bespoke CI/CD system from scratch! Hear more about Tekton at the Continuous Delivery Summit on Monday, and catch the breakout sessions Mario's Adventures in Tekton Land and Russian Doll: Extending Containers with Nested Processes. Meet the Tekton maintainers at the Google Cloud Community Lounge on Thursday November 21 from 12.30-2.25pm, and follow @tektoncd for updates during the conference!

gVisor is a container-native sandbox for defense-in-depth anywhere. It provides a per-sandbox user-space kernel to improve isolation and mitigate privilege escalation vulnerabilities. gVisor integrates with Kubernetes and other container orchestration systems, while preserving the portability and resource efficiency of containers. Connect with the gVisor team in the Google Cloud Community Lounge during the Cloud Native Security meetup from 3.55-4.25pm on Thursday November 21.

Skaffold is a tool from Google that speeds up the feedback loop (build, tag, push, deploy) when developing applications on Kubernetes. Using Skaffold, you create a configuration for your project, and on every source code change Skaffold builds the images, deploys the app, abd starts tailing logs from pods and forwarding ports. For continuous delivery pipelines Skaffold provides a one-off deployment, with the ability to wait for health-checks. Skaffold is now GA, and Patrick Flynn and Balint Pato are available to chat about Skaffold and the Kubernetes Developer Experience from 4-5pm on Tuesday November 19, at the Google Cloud Community Lounge.

Additionally, join us for a breakout session on Binary Authorization in Kubernetes, which brings together Grafeas, an artifact metadata API for software supply chains, and Kritis, a deploy-time policy enforcer for Kubernetes applications.

We're excited to meet with so many users, friends, and fellow contributors at KubeCon, and hope you can join us in our talks and the Google Cloud Community Lounge.

If you're interested in keeping up with the Kubernetes ecosystem, including all the news from KubeCon, subscribe to the Kubernetes Podcast from Google. Every week we release an episode covering news from the community, and in-depth interviews with leaders from the Kubernetes and cloud native ecosystem. Subscribe via your favorite podcast platform.