We’re pleased to announce that the official Android Wear Watch Face API is now available for developers. Watch faces give users even more ways to express their personal style, while creating an opportunity for developers to customize the most prominent UI feature of the watches. Watch faces have been the most requested feature from users and developers alike, and we can’t wait to see what you build for them.

An Introduction to Watch Faces for Android Wear by Timothy Jordan

To get started, first learn about Designing Watch Faces, and then check out the Creating Watch Faces training class. The WatchFace Sample available online and in the Android Studio samples manager also provides a number of different examples to help you jump right in. For a quick overview, you can also watch the Watch Faces for Android Wear DevByte video above.

Watch faces are services that run from your wearable app, so you can provide one or multiple watch faces with a single app install. You can also choose to have configuration activities on the phone or watch, for example to let a user change between 12 and 24-hour time, or to change the watch face’s background. You can use OpenGL to provide smooth graphics, and a background service to pull in useful data like weather and calendar events. Watch faces can be analog, or digital, or display the time in some new way that hasn’t been invented yet––it’s up to you.

Developers are incredibly resourceful and we’re impressed with the watch faces you were able to create without any documentation at all. If you’ve already built a watch face for Android Wear using an unofficial approach, you should migrate your apps to the official API. The official API ensures a consistent user experience across the platform, while giving you additional information and controls, such as letting you know when the watch enters ambient mode, allowing you to adjust the position of system UI elements, and more. Using the new API is also necessary for your app to be featured in the Watch Faces collection on Google Play.

We recommend you update your apps on Google Play as soon as the Android Wear 5.0 API 21 OTA rollout is complete, which we’ll announce on the Android Wear Developers Google+ community. It’s important to wait until the OTA rollout is complete because a Watch Face requiring API 21 will not be visible on a watch running API 20. Once your user gets the OTA, then the watch face will become visible. If you want to immediately launch your updates during the OTA rollout, make sure you set minSdkVersion to 20 in your wearable app, otherwise the app will fail to install for pre-OTA users. Once the rollout is complete, please transition your existing watch faces to the new API by January 31, 2015, at which point we plan to remove support for watch faces that don't use the official API.

In the few short months since we’ve launched Android Wear, developers have already written thousands of apps, taking advantage of custom notifications, voice actions, and fully native Android capabilities. Thanks to you, users have infinite ways to personalize their watches, choosing from six devices, a range of watch bands, and thousands of apps. With support for custom watch faces launching today, users will have even more choices in the future. These choices are at the heart of a rich Android Wear ecosystem and as we continue to open up core features of the platform to developers, we can’t wait to see what you build next. 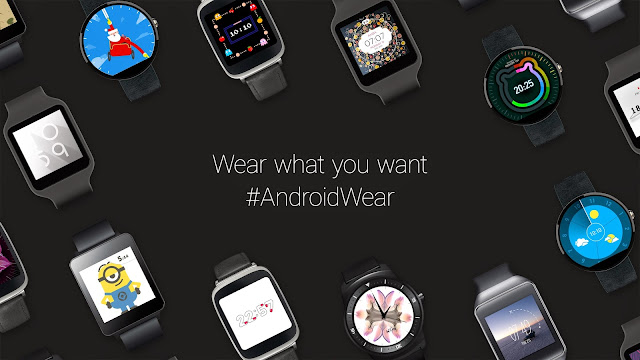