Trains are the lifeblood of India, and train stations sit at the heart of most cities across the country. More than 23 million people, equal to the total population of Australia, get on a train in India every day. Inevitably, many of them end up spending a lot of time in train stations.
Starting today, those passing through Mumbai Central station will have access to something that we hope will make their wait a bit more enjoyable and productive — free, high-speed Wi-Fi. So, if you’re one of the 100,000 people who’ll pass through Mumbai Central today, go ahead, stream the video below in HD to learn more. After that, how about sending those last minute work emails, downloading a new game or offlining a few YouTube videos to keep the kids, and yourself, entertained on the journey ahead.

While we’re thrilled to have the Wi-Fi at this station up and running, it’s really just a small first step. As our CEO, Sundar Pichai, said when we first announced this project, this is just the first of 100 train stations we’ll be bringing online by the end of the year. And one of 400 stations, across every part of India, that we aim to reach in the years ahead in partnership with Indian Railways and RailTel.
We’re hoping those of you from — or traveling through — Allahabad, Jaipur, Patna and Ranchi, will be as excited to learn that your stations are up next!  Stay tuned for details on when you too will be able to start streaming while you wait.
So how does all of this work?
Well, if you’re in Mumbai Central, or, soon, in one of these next four stations, you’ll know that high-speed Wi-Fi is available if you see the ‘RailWire Wi-Fi’ network in your Wi-Fi settings. If you see it, select it and follow the simple steps below to gain access on your phone and up to two additional devices, like a laptop or tablet — you’ll just need an Indian mobile number to get an access code for each device: 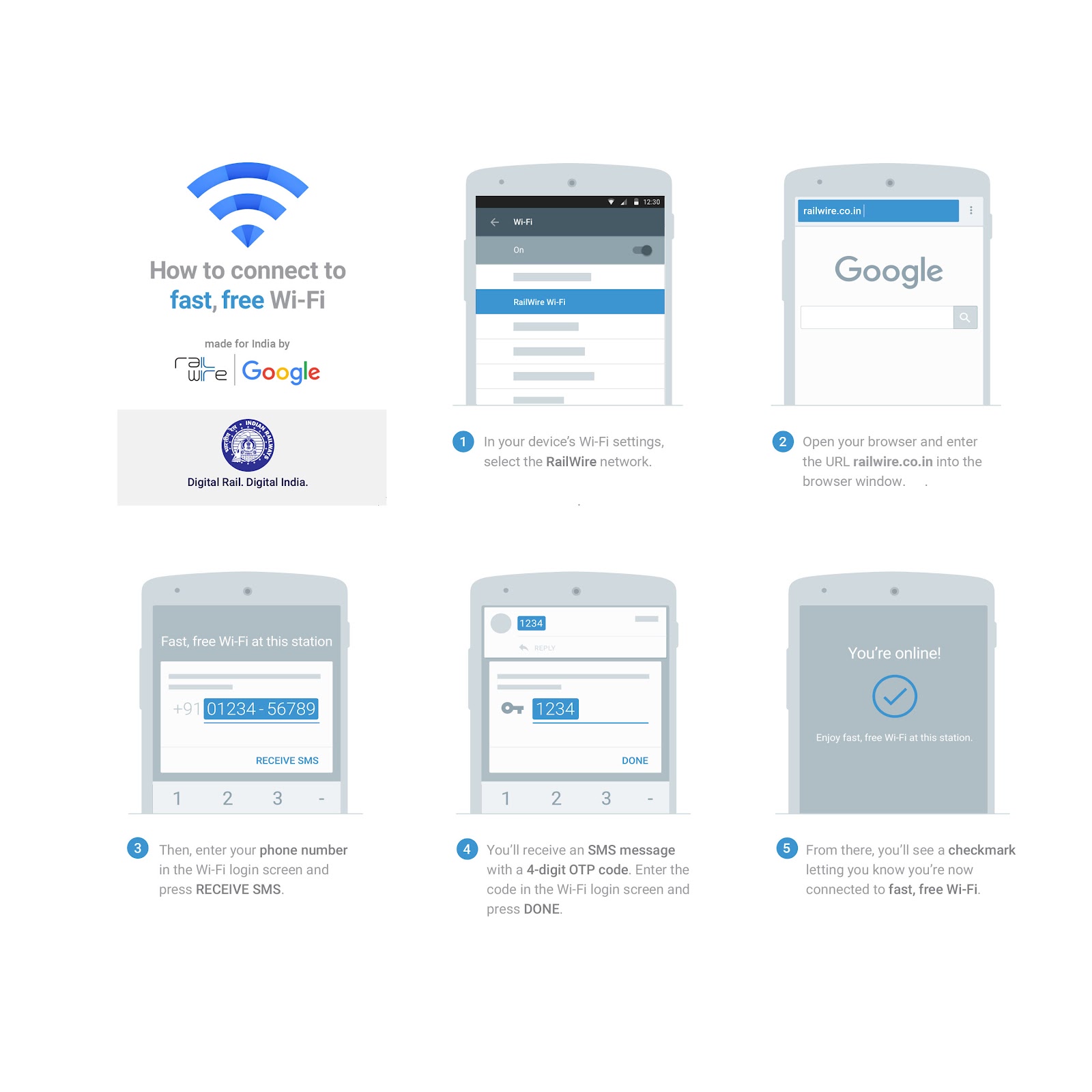 The Wi-Fi will be entirely free to start, so you can stream and download to your heart’s content. While there will always be some level of free Wi-Fi available, the long-term goal will be making this self-sustainable to allow for expansion to more stations and places, with RailTel and other partners, in the future. Also, to make sure that a few people spending all day in the station downloading lots of big files don’t slow down the network for everyone, users might notice a drop in speed after their first hour on the network. Most people should still be able to do the things they’ll want to do online.
Finally, though we’re not going to put a number on it, the thing we’re most excited about with this service is the speed. Most people in India do not have high-speed connectivity. Sadly, connections here are among the slowest in Asia. According to some sources, only around 2 to 4 million households, in a country of 1.3 billion people, have a connection fast enough to stream an HD movie.
We like to think that the thousands, and soon millions, of Indians who come through these stations every day, experiencing the full-speed, open Internet for the first time, will help to push for better connectivity in other places as well. Because we know that even though this project will be the largest public Wi-Fi project in India to date – making Wi-Fi fast enough to stream an HD movie available to 10 million people a day by the end of the year – there are still nearly a billion Indians who have no Internet at all, and millions more who experience just a fraction of the Internet we rely on everyday to learn and laugh and connect with the people we love.
Posted by Gulzar Azad, Head of Access Programs, Google India