Last week Felipe and Michael from the Google Cloud Platform Developer Relations team released a video demonstrating the new Pearson correlation analysis available in Google BigQuery. Their example used more than 70 million flight records to find correlations on departure times, which could be used to predict whether your plane would be late. Specifically, you can find out which set of airports best predict your airport’s possible flight delays the following day.
As you can see from their code (watch the video for context), they’re using iPython Notebook to work with the BigQuery results, and matplotlib to get a quick visual of results. But one aspect that’s hard to see in these results is the spatial relationship of the airports. Maps to the rescue!
My goal was to create a simple visualization, where selecting any airport would highlight which airports you should look at to predict delays the next day. Using the Google Maps JavaScript API I went ahead and did just that: 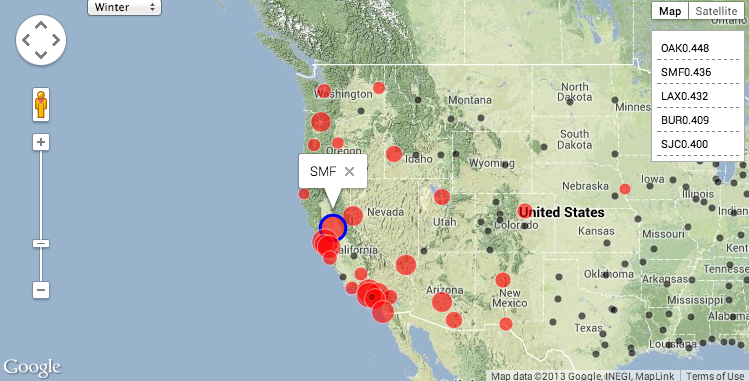 To create this map, using the same code noted above, we first created a JSON dump of the correlations on departure time for each airport to each other airport. Then, using an article on visualizing earthquakes as a template, I modified the code so that we have a simple dictionary of all airports, keyed by their airport id. Last but not least, I added a function that gets called when an airport marker is clicked in order to restyle all the other airport markers according to their correlation. This method checks the selected season (winter, for example, has different correlations than spring), and highlights correlated markers by setting the color and scale of the circle symbol.
https://gist.github.com/jlivni/6602202
Thanks to BigQuery, running complex correlations over billions or trillions of attributes is surprisingly easy. But don’t forget if your data does have some spatial component, a quick mapping visual can add some great context to your results.
Posted by Josh Livni Maps Developer Relations Team