Posted by Kate Parker, Google's Made with Code initiative

Editor's note: Building on the last post about the importance of perceptions of CS—and computer scientists—in the media, here we're sharing more about the new initiative from Made with Code and Disney•Pixar to show the power of code this CSEdWeek.

If you’ve seen Disney•Pixar’s latest hit Inside Out, a film about 11 year old Riley as she journeys through life with the help of her Emotions, you know it’s a movie with the power to capture students’ imaginations, engage their creativity and tap into their emotions.

This year, in celebration of Computer Science Education Week, Google’s Made with Code initiative is tapping into that spirit by teaming up with Disney•Pixar to launch a new Inside Out coding project—inspiring students to explore how computer programming plays a role in animated films like Inside Out. 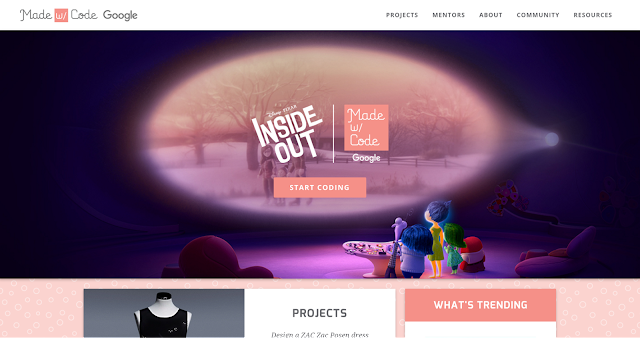 The new coding project invites students to navigate Riley through three different movie scenes using a visual programming language, and introduces coding principles, such as sequencing, if / then statements and looping, along the way. After each completed level, students unlock scenes from the film, and when students need to try again, the lovable Emotions from Inside Out cheer on. 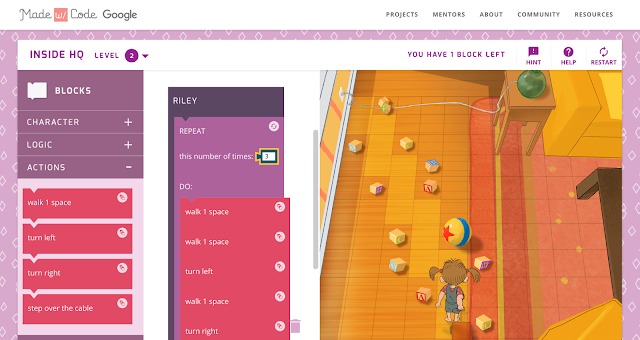 In addition, to help change perceptions of coding, the initiative also features profiles of the women who use computer science to bring Inside Out and Disney•Pixar animated films to life, including Danielle Feinberg who uses code to create the lighting for animated films, and Fran Kalal who uses programming to design and simulate characters’ outfits.
This project builds on Made with Code’s effort to engage more teen girls in computer science and to help them see coding as a means to pursue their dream careers. Since its launch in 2014, millions of teen girls have participated in introductory Made with Code projects, ranging from coding holiday trees outside of the White House to programming 3D printed wearables, and even making the lights and patterns of an LED dress that went down the runway of NY Fashion Week.
As students across the U.S. participate in this year’s Hour of Code we hope students and teachers alike will enjoy the new Disney•Pixar and Made with Code project online, as well as the supporting videos, this week and all year long