Posted by Rahul Roy-chowdhury, VP Product Management, Chrome
One of the virtues of the web is its immense reach, providing access to information for all internet users regardless of device or platform. With the explosion of mobile devices, the web has had to evolve to deliver great experiences on the small screen. This journey began a few years ago, and I am excited to be able to say that the mobile web is open for business. Join me live at Google I/O at 2:00pm PT as I discuss the state of the union and how to take advantage of new experiences like AMP and Progressive Web Apps (PWAs) to deliver a best-in-class mobile experience.
If you don't have time to tune in today, we'll post the recording shortly on our YouTube channel. In the meantime, here's a quick recap of the four aspects to focus on while building a great mobile web experience.
Accelerate
Expressiveness has always been a strength of the web, but sometimes that expressiveness can come at the cost of loading time or smooth scrolling. For example, event listeners allow developers to create custom scrolling effects for their website, but they can introduce jank when Chrome needs to wait for any touch handler to finish before scrolling a page. With the new passive event listener API, we've given control back to the developer, who can indicate whether they plan to handle the scroll or if Chrome can begin scrolling immediately.
Speed also goes beyond user experience gains. Studies have shown that 40% of users will leave a retail site if it takes longer than 3 seconds to load. To get a blazing fast web page in front of users immediately, we've introduced Accelerated Mobile Pages (AMP). With AMP, we have seen pages load 4x faster and use up to 10x less data. AMP is already seeing great adoption by developers, with more than 640,000 domains serving AMP pages.
Engage
Progressive Web Apps (PWAs) let developers take advantage of new technologies to provide users with an engaging experience from the very first moment. Thanks to a new API called service worker, all the important parts of a web app can be cached so that it loads instantly the next time a user opens it. This caching also allows developers to continue to provide a fast and meaningful experience even when the user is offline or on an unreliable network. PWAs provide elements of polish too: an icon users can add to their home screen, a splash screen when they open it, and a full-screen experience with no address bar.

JalanTikus Progressive Web App
Convert
Logging in is a ubiquitous pattern on the web, but 92% of users abandon a task if they've forgotten their password. To alleviate this pain, Chrome's password manager enables more than 8-billion sign-ins per month, and we're expanding support with the Credential Management API. Using this API allows web apps to more closely integrate with the password manager and streamline the sign-in process.
Even once logged in, checkout can be a complicated process to complete. That's why we're also investing in capabilities such as the Web Payment API and enhanced autofill, assisting users by accurately filling in forms for them. We've found that forms are completed 25% more when autofill is available, increasing odds for conversion.
Retain
Once the first interaction with a user is complete, re-engaging on the web can be tricky. Push notifications address this challenge on native apps, and now the push API is available on the web as well. This allows developers to reconnect with their users even if the browser isn't running. Over 10 billion push notifications are sent every day in Chrome, and it’s growing quickly. Jumia found that users who enabled push notifications opened those notifications 38% of the time and recovered carts 9x more often than other users. 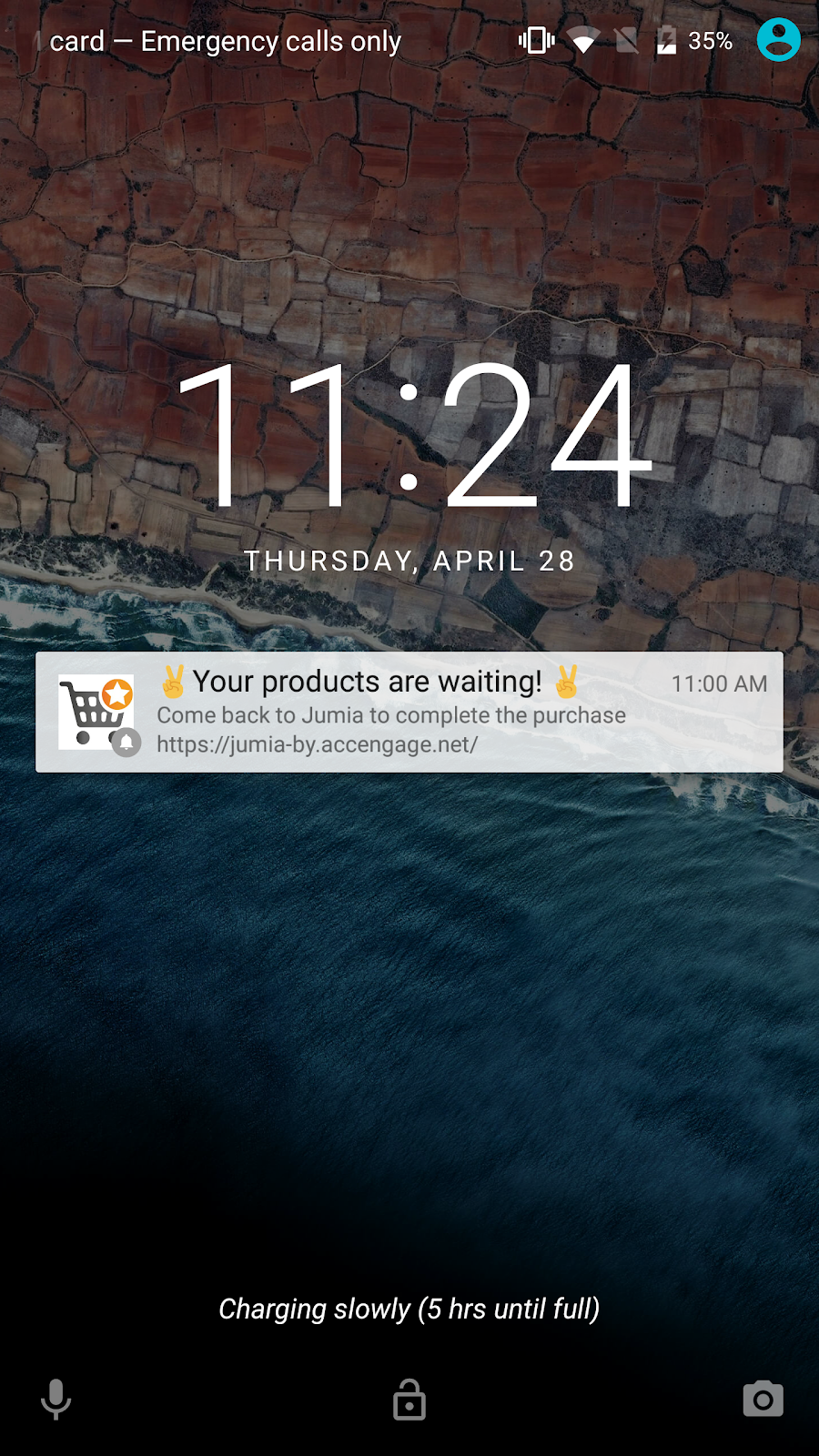 Jumia Mobile Web Push Notifications
Success Stories
As developers begin embracing these new technologies, we're seeing success stories from around the world. AliExpress, one of the world's largest e-commerce sites, built a PWA and saw conversion rates for new users increase by 104%. They've also found that users love the experience, spending 74% more time on their site per session.
Another great example is BaBe, an Indonesian news aggregator service that was app-only until they developed a PWA with feature parity to their native app. Since launching they have found it to perform even faster than their native app, and have seen comparable time spent per session: 3 minutes on average on both their mobile website and their native app.
Even developers who have only begun implementing certain PWA technologies have seen success. United eXtra, a leading retailer in Saudi Arabia, implemented push notifications and saw users who opted-in returned 4x more often. These returning users also spent 100% more than users returning from other channels.
These are just a handful of businesses that have begun reaping the benefits of investing in Progressive Web Apps. Learn more about our how partners are using PWA technologies to enhance their mobile web experience.

Subscribe to our YouTube channel to stay up to date with all the mobile web sessions from Google I/O, which we will continue to upload as they’re ready. Thanks for coming, thanks for watching, and most of all, thank you for developing for the web!