This article was adapted from a Google Testing on the Toilet (TotT) episode. You can download a printer-friendly version of this TotT episode and post it in your office.
By Carlos Israel Ortiz García
After years of anticipation, you're finally able to purchase Google's hottest new product, gShoe*. But after clicking the "Buy" button, nothing happened! Inspecting the HTML, you notice the problem: 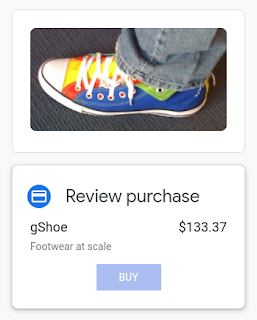 Users couldn’t buy their gShoes because the “Buy” button was disabled. The problem was due to the unit test for handleBuyClick, which passed even though the user interface had a bug:
In the above example, the test failed to detect the bug because it bypassed the UI element and instead directly invoked the "Buy" button click handler. To be effective, tests for UI logic should interact with the components on the page as a browser would, which allows testing the behavior that the end user experiences. Writing tests against UI components rather than calling handlers directly faithfully simulates user interactions (e.g., add items to a shopping cart, click a purchase button, or verify an element is visible on the page), making the tests more comprehensive.
The test for the “Buy” button should instead exercise the entire UI component by interacting with the HTML element, which would have caught the disabled button issue:
Why should tests be written this way? Unlike end-to-end tests, tests for individual UI components don’t require a backend server or the entire app to be rendered. Instead, these  tests run in the same self-contained environment and take a similar amount of time to execute as unit tests that just execute the underlying event handlers directly. Therefore, the UI acts as the public API, leaving the business logic as an implementation detail (also known as the "Use the Front Door First" principle), resulting in better coverage of a feature.
Disclaimer: “gShoe” is not a real Google product. Unfortunately you can’t buy a pair even if the bug is fixed!