Since our launch this Fall, we've seen millions of people set up Android Pay, and the vast majority of them are using tap and pay with their Android devices for the first time. There are now over 1 million locations across the United States that already accept tap and pay, with more being added every day. In short, the response from customers and merchants has been tremendous.

Now we’re ready for the next step: We're working to bring Android Pay's simplicity and security to purchases within apps, and to people in more countries around the world.

Android Pay in apps
Starting today, you’ll be able to use Android Pay to speed through mobile checkout within many of your favorite Android apps in the US. 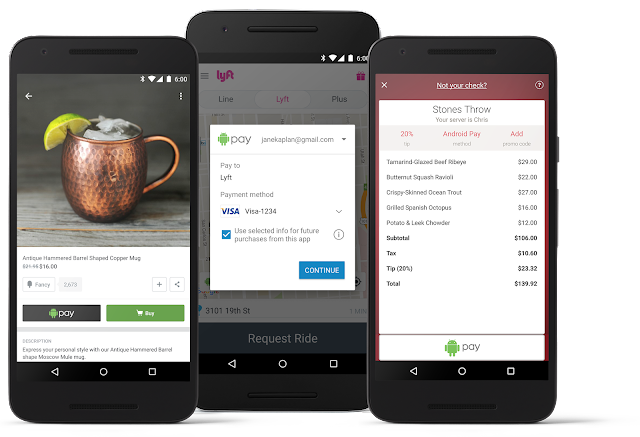 No more pulling out your credit card while on-the-go. No more errors thanks to clumsy thumbs. Just tap the Android Pay button in the app, confirm your information, and you’re done! And just like your purchases in stores, Android Pay never shares your card details with merchants.

Meet our growing collection of apps
In the next few months, you’ll see more and more of your favorite apps adding Android Pay to help you speed through mobile checkout. For a limited time, you’ll also get special savings by using Android Pay in select apps—from $20 off on OpenTable* dining, $10 off your Lyft ride*, $10 off DoorDash* to 30% off Vinted*—there’s something for everyone. Visit our collection to view all the offers.

Developers: want to add Android Pay to your app? You can visit the Android Pay API developer site to learn how to accept Android Pay for the purchase of physical goods and services. We’ve worked with leading payment providers to make accepting Android Pay a breeze.

Android Pay in more countries
We're also taking the first step to bring the convenience of Android Pay to Android users across the globe. In the first half of 2016, Android Pay will arrive in Australia. We’re working closely with many of Australia’s major financial institutions—including ANZ, Westpac and many other banks—with the aim of bringing Android Pay to their MasterCard and Visa card holders. You will be able to use Android Pay wherever NFC payments are accepted in the country, including merchants such as 7-Eleven, McDonald's and Telstra.

And Australia is just the start. We’ll be adding more countries throughout 2016. This was a big year for Android Pay, and we're excited about what's to come.