Zookeeper is the cornerstone of many distributed systems, maintaining configuration information, naming and providing distributed synchronization and group services. But using Zookeeper in a dynamic cloud environment can be challenging, because of the way it keeps track of members in the cluster. Luckily, there’s an open source package called Exhibitor that makes it simple to use Zookeeper with Google Container Engine.

With Zookeeper, it’s easy to implement the primitives for coordinating hosts, such as locking and leader election. To provide these features in a highly available manner, Zookeeper uses a clustering mechanism that requires a majority of the cluster members to acknowledge a change before the cluster’s state is committed. In a cloud environment, however, Zookeeper machines come and go from the cluster (or “ensemble” in Zookeeper terms), changing names and IP addresses, and losing state about the ensemble. These sorts of ephemeral cloud instances are not well suited to Zookeeper, which requires all hosts to know the addresses or hostnames of the other hosts in the ensemble. 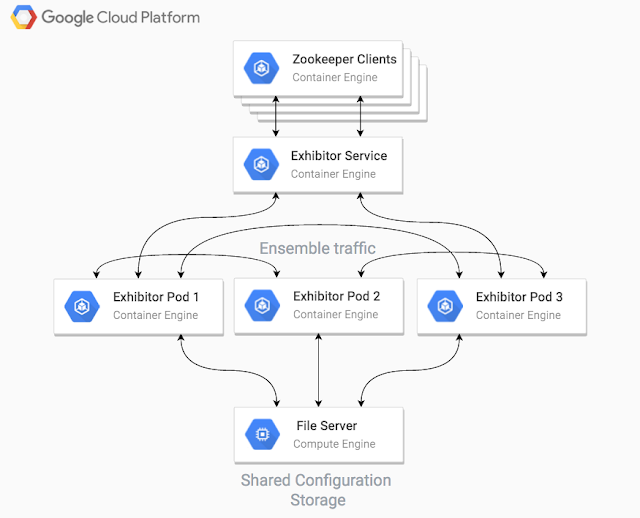 Netflix tackled this issue, and in order to more easily configure, operate, and debug Zookeeper in cloud environments, created Exhibitor, a supervisor process that coordinates the configuration and execution of Zookeeper processes across many hosts. Exhibitor also provides the following features for Zookeeper operators and users:
Let’s take a look at using Exhibitor in Container Engine in order to run Zookeeper as a shared service for our other applications running in a Kubernetes cluster.

To start, provision a shared file server to host the shared configuration file between your cluster hosts. The easiest way to get a file server up and running in Google Cloud Platform is to create a Single Node File Server using Google Cloud Launcher. For horizontally scalable and highly available shared filesystem options on Cloud Platform, have a look at Red Hat Gluster Storage and Avere. The resulting file server will expose both NFS and SMB file shares.
Next, create a Container Engine cluster in which to deploy your Zookeeper ensemble.
Once your cluster is created, open up the Cloud Shell in the Cloud Console by

clicking the button in the top right of the interface.  It looks like:

Now set up your Zookeeper ensemble in Kubernetes.

In this manifest we’re configuring the NFS volume to be attached on each of the pods and mounted in the folder where Exhibitor expects to find its shared configuration.

You have now completed the tutorial and can use your Exhibitor/Zookeeper cluster just like any other Kubernetes service, by accessing its exposed ports (2181 for Zookeeper and 8181 for Exhibitor) and addressing it via its DNS name, or by using environment variables.

In order to access the Exhibitor web UI, run the kubectl proxy command on a machine with a browser, then visit this page.

To scale up your cluster size, simply edit the exhibitor.yaml file and change the replicas to an odd number greater than 3 (e.g., 5), then run “kubectl apply -f exhibitor.yaml” again. Cause havoc in the cluster by killing pods and nodes in order to see how it responds to failures. 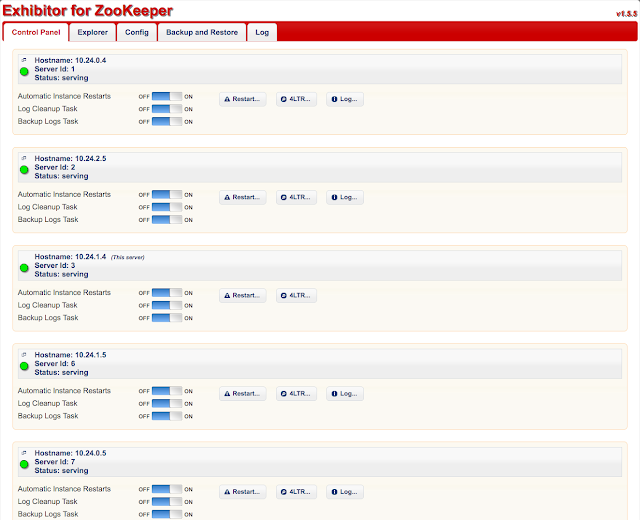