Editor's note: This post is part of our series for Teacher Appreciation Week. Look for more content on our blog and social media throughout the week. Don’t forget to add to the conversation using #ThankATeacher.
This post comes from Anela Arifi and Ilda Ismaili, 2015 Google Science Fair global finalists who are high school students from Bosnia-Herzegovina. Their teacher, Mrs. Aydan Meydan, won the 2015 Inspiring Educator Award, which acknowledges an educator who goes above and beyond in encouraging her students to achieve great things. In honor of Teacher Appreciation Week, Arifi and Ismaili wrote a letter to say thank you to their teacher and mentor, Mrs. Meydan.

You inspire us to be confident and to always challenge ourselves. Throughout high school, we’ve turned to you as our mentor and inspiration. When we decided to apply for the Google Science Fair, you supported us every step of the way. You showed us that our science fair project wasn’t just another assignment — it was an opportunity to show the world what we can do.

Some people ask us how a math teacher could be our science fair mentor, and we explain how you put so much time and energy into understanding our project. You learned about chemistry and biology during your free time, so you could guide us. You taught us the importance of being lifelong learners. You’re constantly curious to learn more, whether it’s about our project or a new way of working. 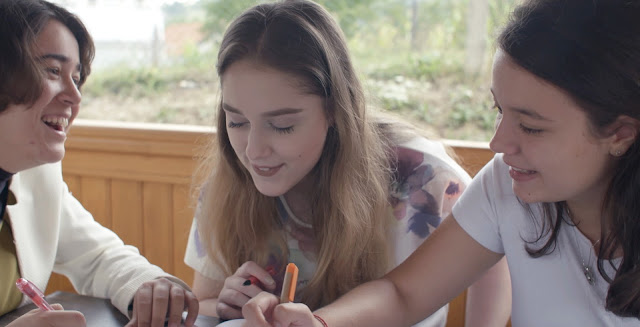 When we reviewed our research paper, we enjoyed teaching you about the properties of biodiesel and explaining the graphs and results, while you taught us the correct format for a research paper. We’re so thankful to have you teach us the principles as we share our knowledge of natural sciences with you.

Thank you for teaching us how to persevere. Whenever we came across a challenge, you told us everything would be okay. Two and a half years ago when we started the project, we reached out to university professors in search of a laboratory to use for our project. Professors responded skeptically — they thought we were too young and pointed out that we didn’t know anything about biodiesel or hydrogen storage. We felt rejected and discouraged. You lifted our spirits by assuring us we’d find the right laboratory. Many students are missing someone who will tell them everything will be okay — and everyone needs that. We all need moral support.
You gave us the confidence to believe that we’re smart and capable. Here in Bosnia-Herzegovina, we don’t always have the chance to pursue every idea, but with you as a great mentor, we had every opportunity to show our talent and passion. Even if we’re in a small country and don’t have as many women in STEM, we can be part of the best science competition in the world.

When we applied for the Google Science Fair, you told us we already succeeded by representing Bosnia-Herzegovina. We’ll never forget when you told us that the most important thing is to be inspired, and to inspire others. The most important part of the competition is to present our project, and if we inspire at least one person, we’re winners.

Thank you for all that you do,
Anela and Ilda

There are only a few weeks left to submit a science or engineering project to the 2016 Google Science Fair. Students that submit a project can nominate their teacher to win the 2016 Inspiring Educator Award.

Editor's note: This post is part of our series for U.S. Teacher Appreciation Week. Look for more content on our blog and social media throughout the week. Don’t forget to add to the conversation using #ThankATeacher.

When I was five years old, I immigrated to the U.S. from Taiwan. My sister and I were the only Asians in our entire school, and I remember how my kindergarten teacher, Mrs. Marvin, went out of her way to make me feel welcome in the classroom and country. I stayed in touch with her until her passing a few years ago. Our relationship speaks volumes about how influential teachers can be. Later in high school, my math teacher, Mr. Fee, showed me how to apply my math skills in the real world. His practical guidance shaped my career aspirations to study chemical engineering in college and to become a high school math teacher myself.
All good teachers inspire students to pursue new opportunities and challenge themselves, but science, technology, engineering & math (STEM) teachers and specifically computer science (CS) teachers have to overcome some obstacles that others don’t. Often, there’s not enough access to CS resources in schools, and school officials haven’t adopted a CS curriculum. Only 22% of public school principals say that CS education is a top priority, despite the fact that more than 1.3 million computer and math-based jobs will be created by 2022, according to a joint Google and Gallup study. CS teachers also have to overcome stereotypes that keep many students, especially girls and underrepresented minorities, away from the subject.

In the spirit of Teacher Appreciation Week, I would like to share the stories of three high school CS teachers who are overcoming these obstacles and inspiring students to be passionate about the problems they want to solve in the world.

When I think of Diane Johnson Terrell words like strength, empowerment and role model come to mind. Terrell, a high school math and engineering teacher at Oakland Unified School District in California, became a CS teacher via an unconventional path. She was working as a programmer analyst and quickly realized she was one of the only African Americans and females in the industry. One of the main reasons the field isn’t more diverse is because people haven’t been exposed to the field, Terrell says. Now her students understand they can build amazing things with a CS degree, and they can have a lucrative career doing so.

Terrell also is breaking down the idea that CS is only for boys and the affluent. She's introducing a CS program that more than 400 9th graders will take next year, and teaching youth at her church how to code and develop an app for the church together.

“Many students in my community play video games and post on social media, but they don’t understand that a lot of programming and code goes into building them,” Terrell says. “My goal is to get my students to move from being consumers to being builders by creating apps on their phones.”

Another inspiring way Terrell is empowering female students to pursue CS is by connecting them with female executives and doctoral students in the field who mentor them and show them that women can be as successful in the field as men. “After spending time with their mentors at UC Berkeley, girls of color learned they have a phenomenal aptitude to change the world,” Terrell says. “Their confidence exploded and they realized how much of a difference they can make.”

The field of CS shares the unfortunate “geek” stereotype that math and engineering do. But that stereotype doesn’t exist at Lake Brantley High School in Altamonte Springs, Florida. Teacher Seth Reichelson, a White House Champion of Change, has toppled those preconceived notions and made his AP CS class appealing to all students. To make the subject relatable and interesting, he changes his in-class examples to be fun, for example by having students manipulate pixels in a picture instead of doing a bug simulation.

“I won’t acknowledge a stereotype because if you acknowledge it, that’s the same as promoting it,” says Reichelson, who learned this strategy at a National Center for Women & Information Technology workshop. “My students have no idea what the stereotype is.”
Reichelson believes that there should be a diversity requirement that the AP CS student population reflect the diversity of the entire school. He believes a more diverse classroom will lead to a greater diversity of ideas and opinions and thus a smarter, better run workplace. “If you have one type of person working for your company, you’re only going to have one type of solution,” Reichelson says. “You have to have a diverse company to have diverse solutions.”

Leslie Aaronson - Turning the classroom into a startup environment

After working for Nickelodeon for three years, Leslie Aaronson realized she wanted to teach students communication, collaboration and networking skills in a way that reflects the real world. Today as lead teacher of Foshay Learning Center’s Technology Academy in Los Angeles, California, she’s turned her classroom into a startup environment. She encourages students to take control of their learning and be proactive, instead of waiting for the teacher to provide instructions. “I put learning back into the student’s hands. Students show each other their screens, and when they can’t figure out a solution to a problem, I ask them, ‘What have you tried, and who have you talked to?’ I challenge them to explore all of their resources.”

Aaronson teaches her students to meet with professionals, both to develop the skill of networking and to form strong relationships with people in the industry. She coordinates mentor days and field trips for her students to connect with people at local colleges like USC and UCLA.

To showcase their projects, Aaronson’s students develop a digital portfolio that speaks to their technology skills when applying for college or interviewing for jobs. “Some kids come back to me three years later and say that the portfolio they created in my class got them a job. The most rewarding thing is to know I’m helping people get on their feet and achieve great things in life.”


These are the stories of just a few of the inspirational CS teachers that are educating the data scientists and software developers of tomorrow. Reach out a hand and support teachers like Diane, Seth and Leslie by donating to a classroom in need at DonorsChoose.org, or partnering with a school to introduce a CS program.