This year's app substantially modifies existing functionality and adds several new features. It also expands the tech stack to use Firebase. In this post, we'll highlight several notable changes to the app as well as their design considerations.

The most prominent new feature for 2017 is the event reservation system, designed to help save in-person attendees' time and provide a streamlined conference experience. Registered attendees could reserve sessions and join waitlists prior to and during the conference; a reservation provided expedited entry to sessions without having to wait in long lines. Reservation data was synced with attendees' conference badges, allowing event staff to verify reservations using NFC-enabled phones. Not only was the reservation feature incredibly popular, but the reservation data helped event staff change the size of session rooms both before and during I/O to adjust for actual demand for seats.

The reservation feature was implemented using Firebase Realtime Database (RTDB) and Cloud Functions for Firebase. RTDB provided easy sync across user devices — we just had to implement a listener in our code to receive database updates. RTDB also provided out-of-the-box offline support, allowing conference data to be available even in the face of intermittent network connectivity while traveling. A Cloud Function processed reservation requests in the background for the user, using transactions to ensure correctness of state (preventing mischievous users from grabbing too many seats!) and communicating with the event badging system.

We also had to figure out good patterns for integrating RTDB into the overall sync logic of IOSched, especially since RTDB comes with a very different sync model than the ping-and-fetch approach we were using in the app. We decided to continue using Cloud Endpoints to synchronize user data across devices and with the web and iOS clients (the data itself was stored in Datastore). While RTDB provides out-of-the-box data syncing, we wanted to make sure that a user's reservation data was current across all devices, even when the app was not in the foreground. We used a Cloud Function to integrate RTDB reservation data into the sync flow: once reservation data for a user changed in RTDB, the function updated the endpoint, which triggered a Firebase Cloud Messaging downstream message to all the user's devices, which then scheduled data syncs. 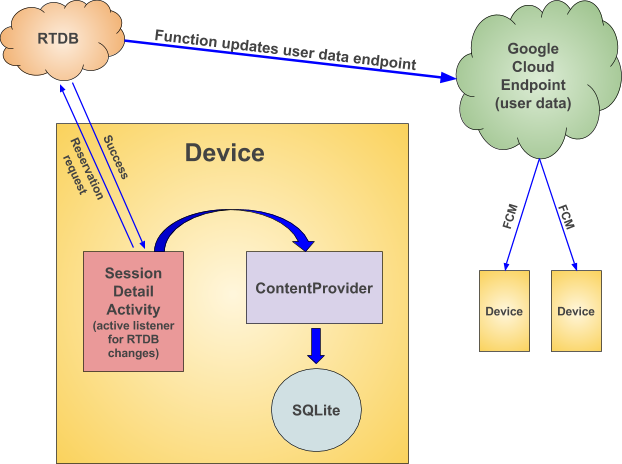 This year's app also featured a Feed to apprise users about hour-by-hour developments at I/O (most of the app's users were remote, and the Feed was a window into the conference for them). The Feed was also powered by RTDB, with data pushed to the server using a simple CMS. We used a Cloud Function to monitor RTDB feed data; when feed data was updated on the server, the Function sent a Cloud Messaging downstream message to clients, which visually surfaced the presence of new feed items to the user.

In 2015 and 2016, we had adopted an MVP architecture for IOSched, and we continued using that this year. This architecture provides us with good separation of concerns, facilitates testing, and in general makes our code cleaner and easier to maintain. For the Feed feature, we decided to experiment with a more lightweight MVP implementation inspired by Android Architecture Blueprints, which provided the necessary modularity while being very easy to conceptualize. The goal here was both pedagogical and practical: we wanted to showcase an alternate MVP pattern for developers; we also wanted to showcase an architecture that was an appropriate fit for our needs for this feature.

For the first time, IOSched made heavy use of Firebase Remote Config. In the past, we had found ourselves unable to inform users when non-session data - wifi information, shuttle schedule, discount codes for ridesharing, etc. - changed just before or during the conference. Forcing an app update was not feasible; we just wanted in-app default values to be updatable. Using remote config easily solved this problem for us.

In the end, we ended up with a three-tier system of informing users about changes:

Even though we're releasing the 2017 code, we still have work ahead of us for the coming months. We'll be updating the code to follow modern patterns for background processing (and making our app "O" compliant), and in the future we'll be adopting Android's Architecture Components to simplify the overall design of the app. Developers can follow changes to the code on GitHub.