When Chloe Quijano arrived at the University of Toronto to study Applied Sciences, she immediately noticed that few of the professors or teaching assistants in the program looked like her. She noticed a lack of relatable role models online and on social media as well.

Chloe felt strongly about the importance of representation. Whether based on race, gender, ethnicity, sexual orientation or disability status, she understood the importance of being able to find relatable role models in her field--and the implications of a lack of diversity. "It holds back the students wishing to go into the field," she says. 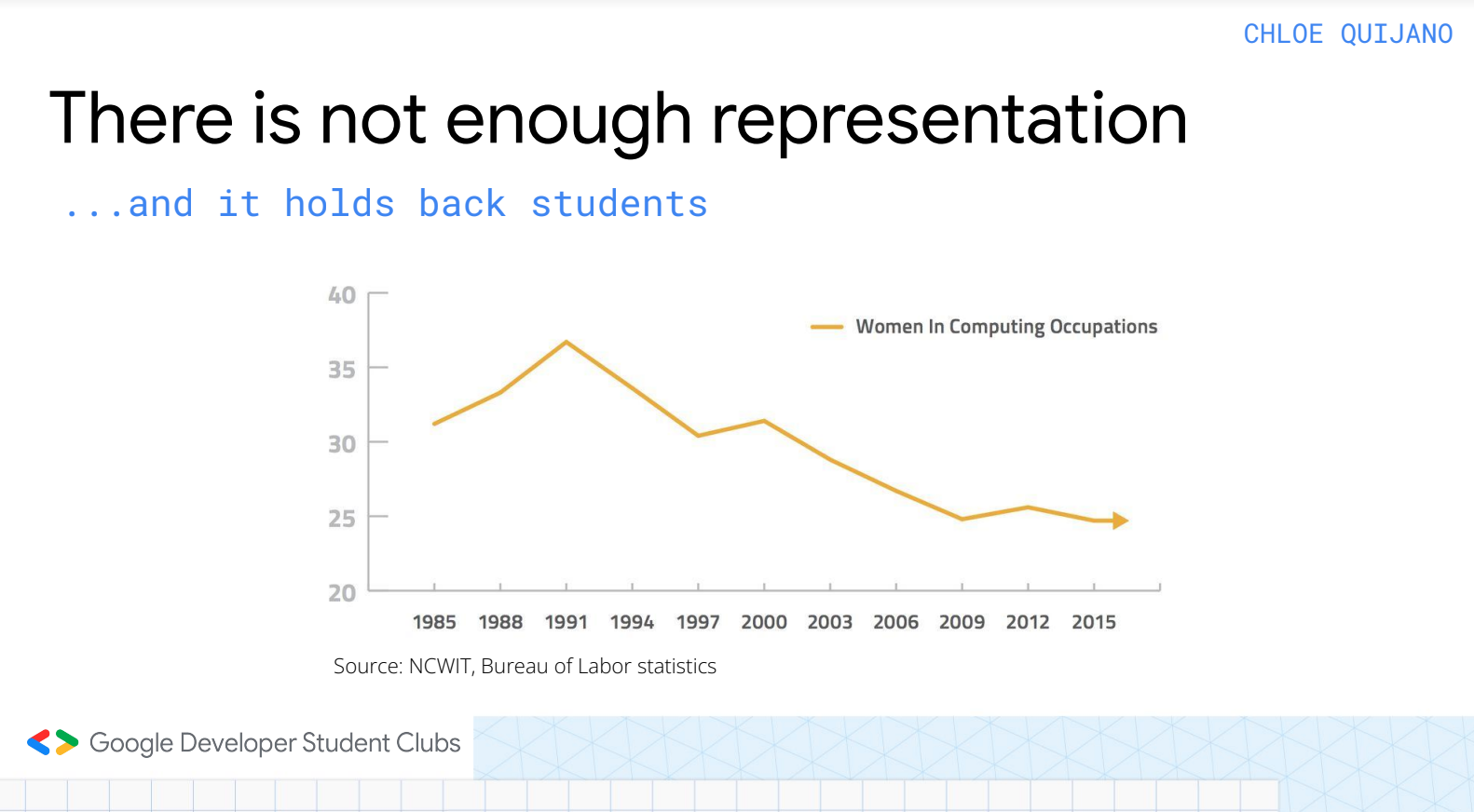 Bureau of Labor Statistics findings on women in computing occupations

Worse, she points out, those that do enter technical careers may experience impostor syndrome: “We often downplay the skills we have as developers.”

Data backs up Chloe’s impression about the lack of diversity in tech: According to the National Center for Women & Information Technology (NCWIT), women made up only a quarter of the workforce in computing in 2020. Of those, just 3% were African-American, 7% Asian, and 2% Hispanic.

Determined to find a way to combat these trends, Chloe decided to look for a supportive community where she could help make a difference. While searching for a technology club where she could meet and learn from others, she stumbled across the university’s Google Developer Student Club. Noticing that the club was soliciting applications to serve as a lead, she decided to apply—and got the post!

Chloe quickly took steps to advance the group’s mission: to empower all students in technology. To help students like her connect with leaders and role models from a diverse range of backgrounds and experiences, she spearheaded the effort to organize the first-ever DSC Women in Tech Conference.

Held last March, the two-day virtual event featured 13 speakers from a range of backgrounds—including CEOs, Google employees, and recent graduates who landed internships and positions at prominent tech companies. Topics included charting your own path in tech, landing that first job, going the entrepreneurship route, and leveraging the power of a personal narrative. Hands-on workshops included a day-long hackathon challenge focused on redesigning a website to be more accessible and user-friendly for senior citizens. Ultimately, the conference drew more than 250 attendees from around the world, including South Korea, Morocco, Brazil, and China.

Expanding the Range of GDSC Events

After the conference’s success, Chloe continued organizing initiatives and programs for her GDSC group. She helped start a monthly tech meetup for women students, and a weekly online series highlighting potential careers paths, and featuring tech leaders as guests. In just under eight months, the chapter hosted 40 events, reaching more than 1700 participants. 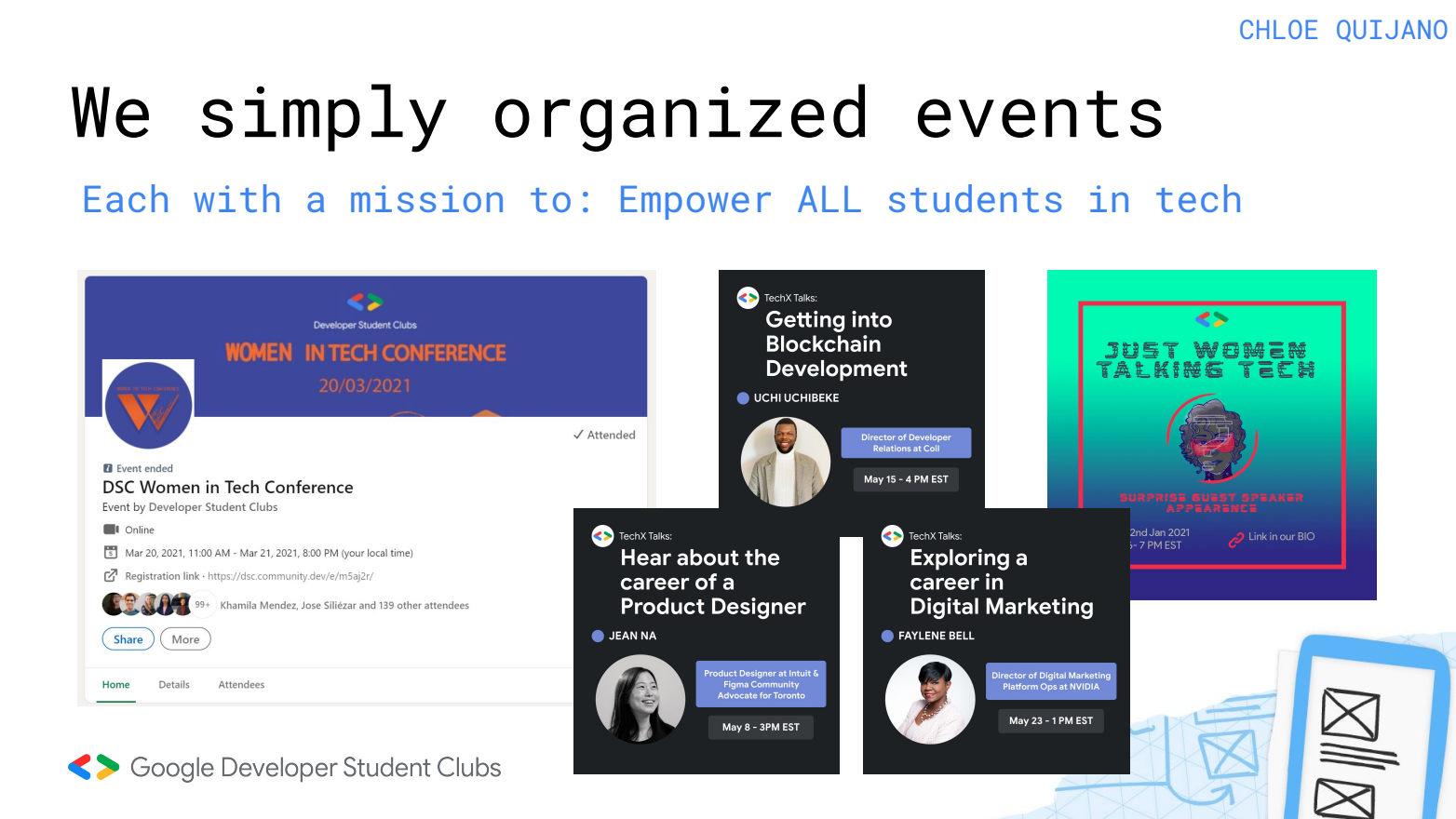 Examples of recent GDSC events at the University of Toronto

Chloe understood that greater encouragement and support can have long-term effects—not only while students are in school, but throughout their careers. “Showing more representation in tech greatly increases our confidence, innovation, and performance,” she points out. “Especially in academic environments, having a sense of belonging and community with role models for students to look up to can lead to success in tech together.”

Looking Ahead: Growth, Inspiration, and Connections

Having completed her term as the GDSC lead for the University of Toronto earlier this year, Chloe says the experience and her continuing involvement with the group has been instrumental in making her the student developer she is today. “I've been able to connect with student leaders globally from diverse backgrounds, academically, professionally, and culturally. It's inspiring to work alongside students who have unique perspectives.”

Such connections have become especially meaningful as she takes steps toward her post-graduation career, such as her first internship last summer, where she worked closely with several women software engineers at Microsoft. “Getting to work with them was really exciting and motivating,” she says.

Chloe can already see how her GDSC experience will support her professional development while also inspiring others to join the field. “I’m always going to be looking to become a better leader,” she says. “And then maybe other students like me who are looking for someone who looks like them, they’ll see me and think, ‘Yes, it’s possible.’”

Ultimately, Chloe says, helping others brings its own rewards: “Success takes care of those who create success for others.”

If you’re a student and would like to join a Google Developer Student Club community, look for a chapter near you here.