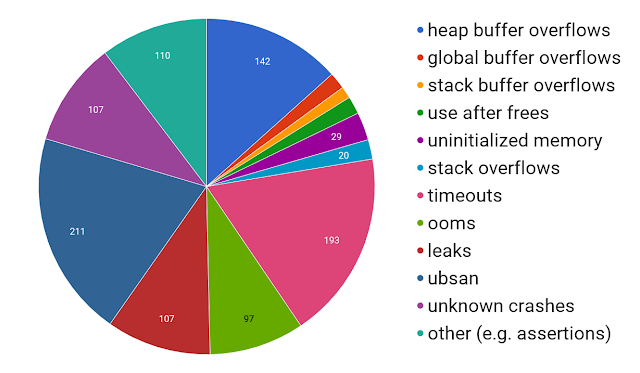 We are happy to announce OSS-Fuzz, a new Beta program developed over the past years with the Core Infrastructure Initiative community. This program will provide continuous fuzzing for select core open source software.

Open source software is the backbone of the many apps, sites, services, and networked things that make up "the internet." It is important that the open source foundation be stable, secure, and reliable, as cracks and weaknesses impact all who build on it.

Recent security storiesconfirm that errors likebuffer overflow anduse-after-free can have serious, widespread consequences when they occur in critical open source software. These errors are not only serious, but notoriously difficult to find via routine code audits, even for experienced developers. That's wherefuzz testing comes in. By generating random inputs to a given program, fuzzing triggers and helps uncover errors quickly and thoroughly.

Our initial trials with OSS-Fuzz have had good results. An example is the FreeType library, which is used on over a billion devices to display text (and which might even be rendering the characters you are reading now). It is important for FreeType to be stable and secure in an age when fonts are loaded over the Internet. Werner Lemberg, one of the FreeType developers, wasan early adopter of OSS-Fuzz. Recently the FreeType fuzzer found a new heap buffer overflow only a few hours after the source change:

Contributions and feedback are welcome

OSS-Fuzz has already found 150 bugs in several widely used open source projects (and churns ~4 trillion test cases a week). With your help, we can make fuzzing a standard part of open source development, and work with the broader community of developers and security testers to ensure that bugs in critical open source applications, libraries, and APIs are discovered and fixed. We believe that this approach to automated security testing will result in real improvements to the security and stability of open source software.

OSS-Fuzz is launching in Beta right now, and will be accepting suggestions for candidate open source projects. In order for a project to be accepted to OSS-Fuzz, it needs to have a large user base and/or be critical to Global IT infrastructure, a general heuristic that we are intentionally leaving open to interpretation at this early stage. See more details and instructions on how to apply here.

Once a project is signed up for OSS-Fuzz, it is automatically subject to the 90-day disclosure deadline for newly reported bugs in our tracker (see details here). This matches industry's best practices and improves end-user security and stability by getting patches to users faster.

Help us ensure this program is truly serving the open source community and the internet which relies on this critical software, contribute and leave your feedback on GitHub.