This year’s big game was filled with action, nostalgia and lots of star power. With all the excitement on the field, Canadians turned to Google to search for their favorite moments of the game - from going Gaga over the national anthem to an end-zone hand jive. Many of us couldn't get enough of the much-awaited halftime performance and went searching for more:  Searches for Coldplay, Beyonce and Bruno Mars spiked dramatically during the halftime show, but the most searched performer during the course of the game was Beyonce.

Sunday's Halftime Show also featured some of the most iconic halftime shows of the past fifty years including the Rolling Stones, Stevie Wonder, Bruce Springsteen, Paul McCartney, Whitney Houston, Michael Jackson, U2 and Katy Perry. Canadians turned online to search for their favourite past performances, with Michael Jackson’s halftime show performance leading the search pack. 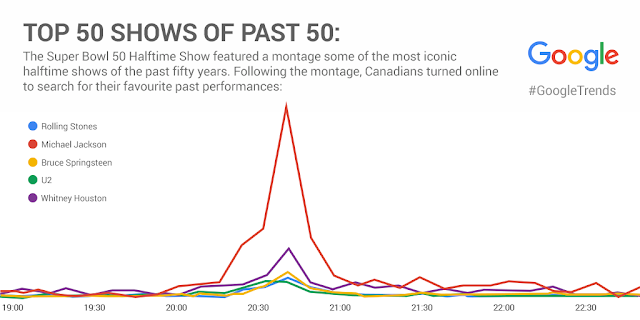 In the meantime, football fans in Canada found themselves searching more for the Carolina Panthers than the Denver Broncos during the game, until the Broncos' win when Canadian searches for the Broncos surged.

During the game, globally we spent 300k hours watching the big game ads and teaser videos on YouTube and we’ve seen nearly 4 million hours of watch time overall so far. Big game ads and teasers have been watched over 330 million times, with 60% of that coming from mobile devices — the first time the majority of views happened on mobile phones. And that game ain’t over yet. From a witty and sharable PSA to a startling ultrasound, here are the advertisers that Canadians searched for most during the Big Game.

In the years past, we've seen a big spike the day after the game as people get to work on Monday morning and reminisce about their favorite big game Big Game moment. In fact, last year more than 40% of total watch time for big game ads happened in the weeks after the game. So don't forget to vote for your favorite before February 10th at Midnight ET.

The big game might be over, but there's always overtime online!
Posted by Jenn Kaiser, Google Canada Communications Manager