In 1945, future Nobel laureate George Stigler wrote an essay in the Journal of Farm Economics titled The Cost of Subsistence about a seemingly simple problem: how could a soldier be fed for as little money as possible?

The “Stigler Diet” became a classic problem in the then-new field of linear optimization, which is used today in many areas of science and engineering. Any time you have a set of linear constraints such as “at least 50 square meters of solar panels” or “the amount of paint should equal the amount of primer” along with a linear goal (e.g., “minimize cost” or “maximize customers served”), that’s a linear optimization problem.

At Google, our engineers work on plenty of optimization problems. One example is our YouTube video stabilization system, which uses linear optimization to eliminate the shakiness of handheld cameras. A more lighthearted example is in the Google Docs Sudoku add-on, which instantaneously generates and solves Sudoku puzzles inside a Google Sheet, using the SCIP mixed integer programming solver to compute the solution. 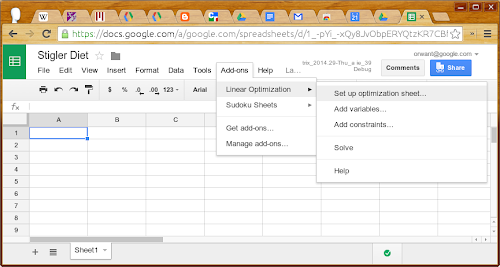 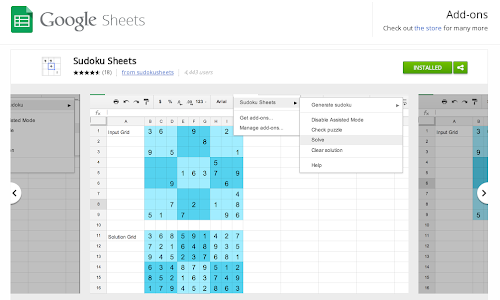 Second, we’re open-sourcing the linear solver underlying the add-on: Glop (the Google Linear Optimization Package), created by Bruno de Backer with other members of the Google Optimization team. It’s available as part of the or-tools suite and we provide a few examples to get you started. On that page, you’ll find the Glop solution to the Stigler diet problem. (A Google Sheets file that uses Glop and the Linear Optimization add-on to solve the Stigler diet problem is available here. You’ll need to install the add-on first.)

Stigler posed his problem as follows: given nine nutrients (calories, protein, Vitamin C, and so on) and 77 candidate foods, find the foods that could sustain soldiers at minimum cost.

The Simplex algorithm for linear optimization was two years away from being invented, so Stigler had to do his best, arriving at a diet that cost $39.93 per year (in 1939 dollars), or just over ten cents per day. Even that wasn’t the cheapest diet. In 1947, Jack Laderman used Simplex, nine calculator-wielding clerks, and 120 person-days to arrive at the optimal solution.

Glop’s Simplex implementation solves the problem in 300 milliseconds. Unfortunately, Stigler didn’t include taste as a constraint, and so the poor hypothetical soldiers will eat nothing but the following, ever:
Is it possible to create an appealing dish out of these five ingredients? Google Chef Anthony Marco took it as a challenge, and we’re calling the result Foie Linéaire à la Stigler: 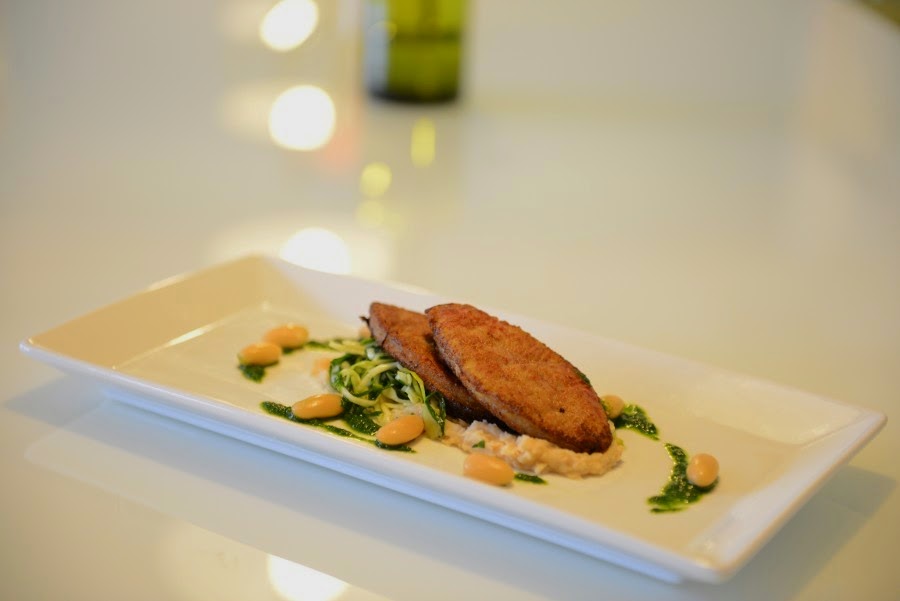 This optimal meal consists of seared calf liver dredged in flour, atop a navy bean purée with marinated cabbage and a spinach pesto.

Chef Marco reported that the most difficult constraint was making the dish tasty without butter or cream. That said, I had the opportunity to taste our linear optimization solution, and it was delicious.