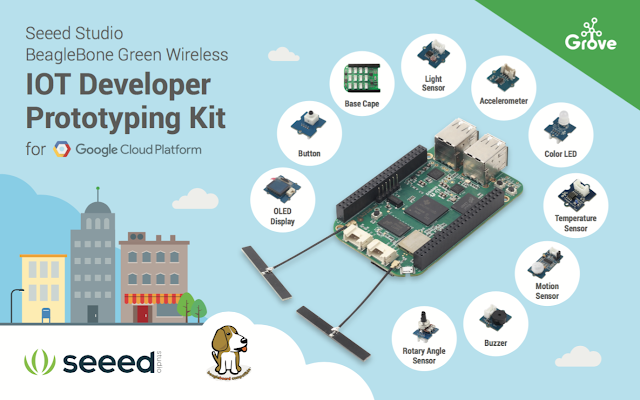 The Internet of Things provides businesses with the opportunity to connect their IT infrastructure beyond the datacenter to an ever-increasing number of sensors and actuators that can convert analog information to digital data, and we believe Google Cloud Platform (GCP) is a great landing place for that valuable information. Whether it’s handling event ingest in Google Cloud Pub/Sub, processing the streams of data from multiple devices with Google Cloud Dataflow, storing time-series data in Google Bigtable, or asking questions across IoT and non-IoT data with Google BigQuery, GCP’s data and analytics products can help you manage that IoT data and turn it into something relevant.

Just like software, it's useful to prototype and validate your IoT project quickly. Unfortunately, not all businesses have a bench of electrical engineers and embedded software developers on staff. That’s why we’ve teamed up with Seeed Studio and Beagleboard.org to bring you the BeagleBone Green Wireless IoT Developer prototyping kit for GCP.

Features of the BeagleBone IoT prototyping kit include:

With the BeagleBone Green Wireless IoT Developer prototyping kit, you'll be able to get data from the world around you directly onto GCP within minutes. From there, you can use any of our client libraries on the board's familiar Debian Linux operating system.

Learn more about the kit and demo! Don’t have the kit yet? Buy one here, or use your phone as a simulated device. Most importantly, let us know how it goes.