Google’s mission is to connect people to the world’s information by providing fast and reliable infrastructure. From data centers to cables under the sea, we’re dedicated to building infrastructure that reaches more people than ever before.

Today, we announced that we will work with Facebook, Pacific Light Data Communication and TE Subcom to build the first direct submarine cable system between Los Angeles and Hong Kong with ultra high-capacity.

The Pacific Light Cable Network (PLCN) will have 12,800 km of fiber and an estimated cable capacity of 120 Tbps, making it the highest-capacity trans-Pacific route, a record currently held by another Google-backed cable system, FASTER. In other words, PLCN will provide enough capacity for Hong Kong to have 80 million concurrent HD video conference calls with Los Angeles — an example of Google Cloud Platform having the largest network backbone of any public cloud provider.

This is the sixth submarine cable in which Google has an ownership stake — joining the ranks of the Unity, SJC, FASTER, MONET and Tannat projects. We anticipate that PLCN will be operational in 2018. 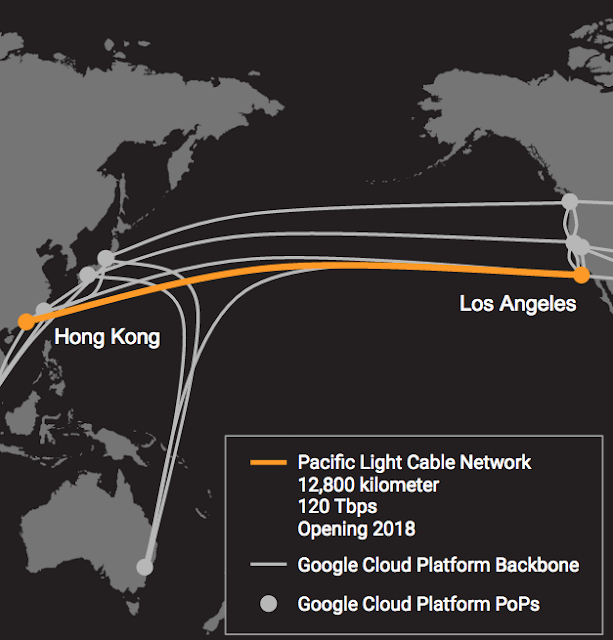 From the get-go, PLCN is designed to accommodate evolving infrastructure technology, allowing us to independently choose network equipment and refresh optical technology as it advances. Most importantly, PLCN will bring lower latency, more security and greater bandwidth to Google users in the APAC region. In addition to our existing investments in APAC cloud regions and the FASTER cable system, PLCN expands our ability to serve people in Asia, including Google Cloud and G Suite customers.

Nei Hou, Hong Kong! We can’t wait to link up with you!