Welcome to the 22nd installment of our blog series “My Path to Google.” These are real stories from Googlers, interns, and alumni highlighting how they got to Google, what their roles are like, and even some tips on how to prepare for interviews.

Today’s post is all about Christof Leng. Read on! 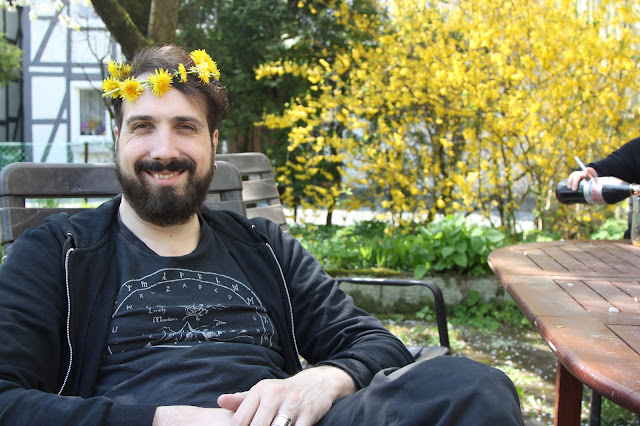 Can you tell us a bit about yourself?
I was born and raised in Germany, near Frankfurt. I first got in touch with computers as an elementary school kid when my cousin introduced me to video games on his Commodore 64 and showed me how to write simple BASIC programs. The power to teach a machine anything I could imagine, seemed like magic to me (and still does).

Many years later, I received a PhD in computer science from TU Darmstadt on the topic of stochastic replication mechanisms in unstructured peer-to-peer networks. After my PhD, I've been a visiting postdoc at UC Berkeley, working with the AMP Lab folks on Apache Spark.

I also used to be a DJ for gothic parties, founded and led the Pirate Party Germany (which had over 35,000 members at some point), and I've been a vice-president of the German Informatics Society. I also taught a masters course on Site Reliability Engineering at my alma mater.

My hobbies are underground music, graphic novels, computer games, Tolkien, and other nerdy stuff. I live with my wife, my son, and our three cats in Darmstadt.

What’s your role at Google?
I'm a tech lead/manager of one of the Site Reliability Engineer (SRE) teams that runs Google's developer tools. My team is working on Google's continuous testing system and issue tracking system, among other things.

The developer tools at Google keep amazing me and it's an honor to be in charge of keeping them up and running. As a SRE, I thrive in ambiguity. We don't do the same manual tasks over and over again, like a classic operations role, but implement automation or redesign the system to fix the problem for good. That way, we have the time to pick up new interesting challenges every day. With our daily tasks changing all the time, SRE as an organization evolves at a breathtaking rate.

What inspires you to come in every day?
First and foremost, the fantastic colleagues I get to work with. Secondly, the great work environment Google provides, both the infrastructure and the organizational framework that gives us the freedom to do the right thing.

The scale at which Google operates is simply mind-blowing. You can fire up thousands of servers with the press of a button. You see petabytes of data flying by. And you know that you provide the infrastructure for products used by billions of people around the globe, making things possible everyday that I couldn't even dream of when I was a kid.

Can you tell us about your decision to enter the process?
Google was never an option for me. Even though one of my mentors at grad school moved on to become a manager at Google, I never applied myself. I heard the interviews are terribly hard and imagined I had to move to California, which seemed very far away at the time. My dream was to become a professor, not to work for a large corporation.

Coincidentally, I eventually ended up in Berkeley, California and was approached by a Google recruiter. I guess my LinkedIn profile said something about "big data." They asked, "Have you considered becoming an SRE?" and I was like, "What is that?" I think they had to explain the role to me three times during the interview process (and I still didn't get it). In hindsight, I'm extremely grateful that my academic career didn't pan out. Most stuff at Google is so much more advanced than what I would have been working on in academia.

How did the recruitment process go for you?
I was approached by a recruiter. I was surprised and excited. I also had no idea how to get through the process. Most job interviews in Germany are quite different than the Google process. I got myself two books and gave it a shot. The interviews were as tough as expected, but never unfair. I thought I got lucky with the questions I got, but thought I bombed one session. I think it was the most thorough screening of my technical skills I've ever been through. My recruiter was always very supportive and explained the process to me.

What do you wish you’d known when you started the process?
Probably how to negotiate an (even) better salary — I still have no clue how that is done. One thing I'm *glad* I didn't know is how much I would like my job. I would've been much more nervous and probably screwed up in the interviews.
Can you tell us about the resources you used to prepare for your interview or role?
The Google Resume and Cracking the Coding Interview by Gayle Laakmann McDowell. Sending my resume to a number of friends and colleagues for advice and proofreading.

Do you have any tips you’d like to share with aspiring Googlers?
Follow your dreams. Always challenge the status quo. But be pragmatic. It's not helping anyone if you have your head in the clouds, but don't deliver results, no matter how little they may seem. One step at a time. Be open to change, especially if it scares you. I regret my failures much less than the risks I didn't dare to take at the time.