While at Google I/O, I had a chance to sit down for a cup of coffee with Ankur Kotwal, Developer Advocate at Google and Ken Hoetmer, Product Manager for the Google Maps APIs. Both had an interesting perspective on how maps have evolved and where they are headed.

In Ankur’s session we discussed technologies beyond the visualization aspects of maps, including the Directions API, Places API and Roads API. He highlighted innovative ways developers are using Google Maps APIs including VR, marker clustering and heatmaps. We also spoke about Santa Tracker, which Ankur has been a part of for four years (he also revealed what Santa likes to do during his time off). Ankur announced the new Google Maps APIs Beta program, so if you have not signed-up, head over to the site to apply.


Learn about developing Geo applications over Coffee with Ankur Kotwal

While speaking with Ken, we discussed how he started working with maps and the Google Maps API as well as how he eventually landed at Google on the Sydney maps team. Ken spoke about how use cases have evolved from interactive maps to more powerful applications and insights driven by location information made available through the APIs. He shared details about some newer APIs including native iOS and Android Places API, Roads API, Directions API and Predictive Travel Time (estimating travel time and routes based on now or in the future). He also highlighted some notable location-based intelligence use cases including Uber, GoJek, Dash Labs and the city of Sydney.

About Laurence: I am a Developer Advocate at Google, working on mobile services, specializing in cross-platform developer technologies. As the host of 'Coffee with a Googler' on the Google Developers channel I’m able to meet with some of those most creative and inspiring developers at Google and learn about the projects they’re leading. When I’m not Googling, I’m involved in many things, including working on the revival comics for the Stargate TV shows, and enjoying the geek cred that this brings. 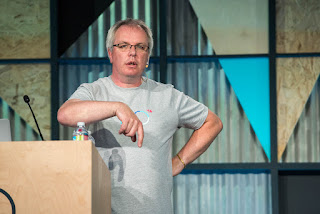