Editor’s note: Today is the fourth installment in a seven-part video and blog series from Google Developer Advocate Sandeep Dinesh on how to get the most out of your Kubernetes environment.

When Kubernetes schedules a Pod, it’s important that the containers have enough resources to actually run. If you schedule a large application on a node with limited resources, it is possible for the node to run out of memory or CPU resources and for things to stop working!

It’s also possible for applications to take up more resources than they should. This could be caused by a team spinning up more replicas than they need to artificially decrease latency (hey, it’s easier to spin up more copies than make your code more efficient!), to a bad configuration change that causes a program to go out of control and use 100% of the available CPU. Regardless of whether the issue is caused by a bad developer, bad code, or bad luck, what’s important is that you be in control.

In this episode of Kubernetes best practices, let’s take a look at how you can solve these problems using resource requests and limits.

Requests and limits are the mechanisms Kubernetes uses to control resources such as CPU and memory. Requests are what the container is guaranteed to get. If a container requests a resource, Kubernetes will only schedule it on a node that can give it that resource. Limits, on the other hand, make sure a container never goes above a certain value. The container is only allowed to go up to the limit, and then it is restricted.

It is important to remember that the limit can never be lower than the request. If you try this, Kubernetes will throw an error and won’t let you run the container.

Requests and limits are on a per-container basis. While Pods usually contain a single container, it’s common to see Pods with multiple containers as well. Each container in the Pod gets its own individual limit and request, but because Pods are always scheduled as a group, you need to add the limits and requests for each container together to get an aggregate value for the Pod.

To control what requests and limits a container can have, you can set quotas at the Container level and at the Namespace level. If you want to learn more about Namespaces, see this previous installment from our blog series!

Let’s see how these work.

There are two types of resources: CPU and Memory. The Kubernetes scheduler uses these to figure out where to run your pods.

Here are the docs for these resources.

If you are running in Google Kubernetes Engine, the default Namespace already has some requests and limits set up for you.

These default settings are okay for “Hello World”, but it is important to change them to fit your app. 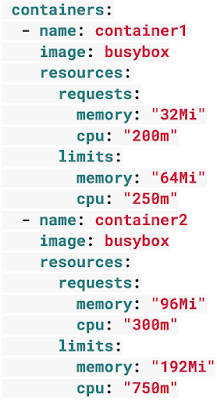 Each container in the Pod can set its own requests and limits, and these are all additive. So in the above example, the Pod has a total request of 500 mCPU and 128 MiB of memory, and a total limit of 1 CPU and 256MiB of memory.

Unless your app is specifically designed to take advantage of multiple cores (scientific computing and some databases come to mind), it is usually a best practice to keep the CPU request at ‘1’ or below, and run more replicas to scale it out. This gives the system more flexibility and reliability.

It’s when it comes to CPU limits that things get interesting. CPU is considered a “compressible” resource. If your app starts hitting your CPU limits, Kubernetes starts throttling your container. This means the CPU will be artificially restricted, giving your app potentially worse performance! However, it won’t be terminated or evicted. You can use a liveness health check to make sure performance has not been impacted.

Memory resources are defined in bytes. Normally, you give a mebibyte value for memory (this is basically the same thing as a megabyte), but you can give anything from bytes to petabytes.

Just like CPU, if you put in a memory request that is larger than the amount of memory on your nodes, the pod will never be scheduled.

Unlike CPU resources, memory cannot be compressed. Because there is no way to throttle memory usage, if a container goes past its memory limit it will be terminated. If your pod is managed by a Deployment, StatefulSet, DaemonSet, or another type of controller, then the controller spins up a replacement.

It is important to remember that you cannot set requests that are larger than resources provided by your nodes. For example, if you have a cluster of dual-core machines, a Pod with a request of 2.5 cores will never be scheduled! You can find the total resources for Kubernetes Engine VMs here.

In an ideal world, Kubernetes’ Container settings would be good enough to take care of everything, but the world is a dark and terrible place. People can easily forget to set the resources, or a rogue team can set the requests and limits very high and take up more than their fair share of the cluster.

To prevent these scenarios, you can set up ResourceQuotas and LimitRanges at the Namespace level.

After creating Namespaces, you can lock them down using ResourceQuotas. ResourceQuotas are very powerful, but let’s just look at how you can use them to restrict CPU and Memory resource usage. 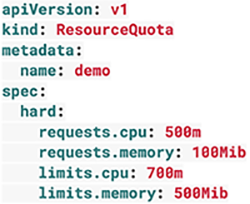 Looking at this example, you can see there are four sections. Configuring each of these sections is optional.

limits.cpu is the maximum combined CPU limits for all the containers in the Namespace. It’s just like requests.cpu but for the limit.

limits.memory is the maximum combined Memory limits for all containers in the Namespace. It’s just like requests.memory but for the limit.

You can also create a LimitRange in your Namespace. Unlike a Quota, which looks at the Namespace as a whole, a LimitRange applies to an individual container. This can help prevent people from creating super tiny or super large containers inside the Namespace.

Looking at this example, you can see there are four sections. Again, setting each of these sections is optional.

The default section sets up the default limits for a container in a pod. If you set these values in the limitRange, any containers that don’t explicitly set these themselves will get assigned the default values.

The defaultRequest section sets up the default requests for a container in a pod. If you set these values in the limitRange, any containers that don’t explicitly set these themselves will get assigned the default values.

The max section will set up the maximum limits that a container in a Pod can set. The default section cannot be higher than this value. Likewise, limits set on a container cannot be higher than this value. It is important to note that if this value is set and the default section is not, any containers that don’t explicitly set these values themselves will get assigned the max values as the limit.

The lifecycle of a Kubernetes Pod

At the end of the day, these resources requests are used by the Kubernetes scheduler to run your workloads. It is important to understand how this works so you can tune your containers correctly.

Let’s say you want to run a Pod on your Cluster. Assuming the Pod specifications are valid, the Kubernetes scheduler will use round-robin load balancing to pick a Node to run your workload.

Kubernetes then checks to see if the Node has enough resources to fulfill the resources requests on the Pod’s containers. If it doesn’t, it moves on to the next node.

If none of the Nodes in the system have resources left to fill the requests, then Pods go into a “pending” state. By using Kubernetes Engine features such as the Node Autoscaler, Kubernetes Engine can automatically detect this state and create more Nodes automatically. If there is excess capacity, the autoscaler can also scale down and remove Nodes to save you money!

At this point, Kubernetes goes into something called an “overcommitted state.” Here is where things get interesting. Because CPU can be compressed, Kubernetes will make sure your containers get the CPU they requested and will throttle the rest. Memory cannot be compressed, so Kubernetes needs to start making decisions on what containers to terminate if the Node runs out of memory.

Let’s imagine a scenario where we have a machine that is running out of memory. What will Kubernetes do?

Note: The following is true for Kubernetes 1.9 and above. In previous versions, it uses a slightly different process. See this doc for an in-depth explanation.

If Kubernetes finds multiple pods that have gone over their requests, it will then rank these by the Pod’s priority, and terminate the lowest priority pods first. If all the Pods have the same priority, Kubernetes terminates the Pod that’s the most over its request.

In very rare scenarios, Kubernetes might be forced to terminate Pods that are still within their requests. This can happen when critical system components, like the kubelet or docker, start taking more resources than were reserved for them.