Cross-posted from the Google Asia Pacific Blog
Election season is in full swing for two of the world’s largest democracies as a staggering one billion people make their way to the polls in April. To help keep Indian and Indonesian voters informed, we’ve launched tools that provide easier access to the latest news, videos, and practical details about the coming elections.
India
We’re enabling interaction between candidates and their electorates through a series of Hangouts on Air with India’s political leaders. You can view the conversation with BJP leader Arun Jaitley and stay informed about upcoming guests through our Elections Hub.
Indians can also submit an interactive Pledge to Vote on the map to share messages with fellow citizens on why voting is important. If you need any inspiration, watch this moving story of Mr. Shyam Negi, independent India’s first voter, who is 97 years old and has never missed the opportunity to cast his vote.

Indonesia
In Indonesia, voting-rights NGO Perludem and The Asia Foundation are using our Google Maps tools to create a candidate information map that will be updated as votes come in on election day. Together with Perludem, we’ve also held workshops to enable Indonesian candidates to reach and communicate with voters across the country on platforms such as YouTube and Google+. In this year’s election, 44% of voters are between 18 and 22 years old, and are casting their ballots for the first time. We hope that through better engagement with the candidates, more young voters will be encouraged to go to the polls.
Indonesia’s Elections Hub also keeps citizens informed about how the different political parties are trending in Google Search. 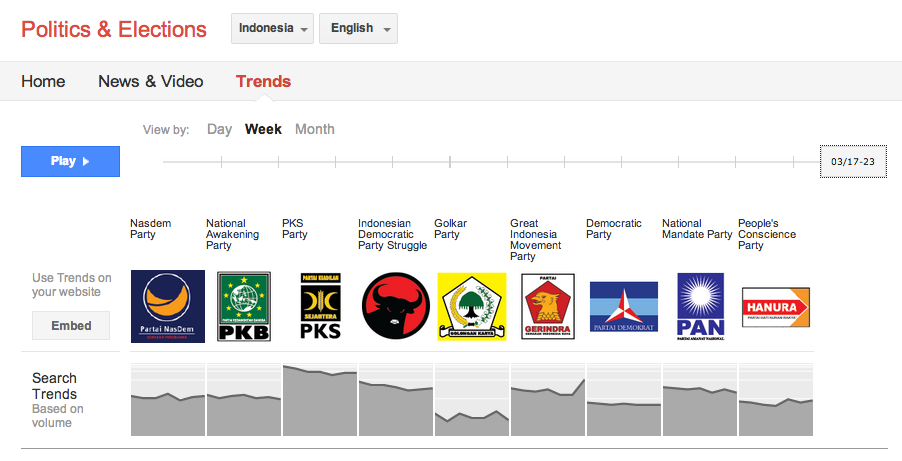 As election fever sets in, we hope the Elections Hubs at Google.co.in/elections for India and Google.co.id/elections for Indonesia provide you with all the information that you need to stay on top of these significant events.
Posted by Chetan Krishnaswamy, Head of Government Relations at Google India, and Shinto Nugruho, Head of Government Relations, Google Indonesia