Good ideas often fail in practice, and in the world of testing, one pervasive good idea that often fails in practice is a testing strategy built around end-to-end tests.

Testers can invest their time in writing many types of automated tests, including unit tests, integration tests, and end-to-end tests, but this strategy invests mostly in end-to-end tests that verify the product or service as a whole. Typically, these tests simulate real user scenarios.

While relying primarily on end-to-end tests is a bad idea, one could certainly convince a reasonable person that the idea makes sense in theory.

To start, number one on Google's list of ten things we know to be true is: "Focus on the user and all else will follow." Thus, end-to-end tests that focus on real user scenarios sound like a great idea. Additionally, this strategy broadly appeals to many constituencies:

So if this testing strategy sounds so good in theory, then where does it go wrong in practice? To demonstrate, I present the following composite sketch based on a collection of real experiences familiar to both myself and other testers. In this sketch, a team is building a service for editing documents online (e.g., Google Docs).

Let's assume the team already has some fantastic test infrastructure in place. Every night:

The deadline is approaching fast as our team codes new features for their next release. To maintain a high bar for product quality, they also require that at least 90% of their end-to-end tests pass before features are considered complete. Currently, that deadline is one day away:

Despite numerous problems, the tests ultimately did catch real bugs.

So now that we know what went wrong with the end-to-end strategy, we need to change our approach to testing to avoid many of these problems. But what is the right approach?

The True Value of Tests

Typically, a tester's job ends once they have a failing test. A bug is filed, and then it's the developer's job to fix the bug. To identify where the end-to-end strategy breaks down, however, we need to think outside this box and approach the problem from first principles. If we "focus on the user (and all else will follow)," we have to ask ourselves how a failing test benefits the user. Here is the answer:

A failing test does not directly benefit the user.

The user will only be happy when that unintended behavior - the bug - goes away. Obviously, to fix a bug, you must know the bug exists. To know the bug exists, ideally you have a test that catches the bug (because the user will find the bug if the test does not). But in that entire process, from failing test to bug fix, value is only added at the very last step.

Tests create a feedback loop that informs the developer whether the product is working or not. The ideal feedback loop has several properties:

So how do we create that ideal feedback loop? By thinking smaller, not larger.

Unit tests take a small piece of the product and test that piece in isolation. They tend to create that ideal feedback loop:


Writing effective unit tests requires skills in areas such as dependency management, mocking, and hermetic testing. I won't cover these skills here, but as a start, the typical example offered to new Googlers (or Nooglers) is how Google builds and tests a stopwatch.

With end-to-end tests, you have to wait: first for the entire product to be built, then for it to be deployed, and finally for all end-to-end tests to run. When the tests do run, flaky tests tend to be a fact of life. And even if a test finds a bug, that bug could be anywhere in the product.

Although end-to-end tests do a better job of simulating real user scenarios, this advantage quickly becomes outweighed by all the disadvantages of the end-to-end feedback loop:

Unit tests do have one major disadvantage: even if the units work well in isolation, you do not know if they work well together. But even then, you do not necessarily need end-to-end tests. For that, you can use an integration test. An integration test takes a small group of units, often two units, and tests their behavior as a whole, verifying that they coherently work together.

If two units do not integrate properly, why write an end-to-end test when you can write a much smaller, more focused integration test that will detect the same bug? While you do need to think larger, you only need to think a little larger to verify that units work together.

Even with both unit tests and integration tests, you probably still will want a small number of end-to-end tests to verify the system as a whole. To find the right balance between all three test types, the best visual aid to use is the testing pyramid. Here is a simplified version of the testing pyramid from the opening keynote of the 2014 Google Test Automation Conference: 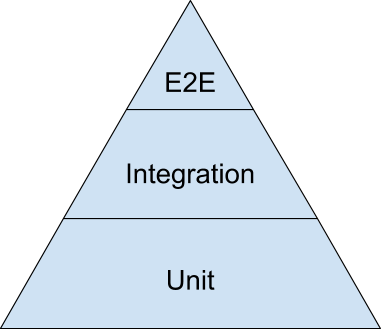 The bulk of your tests are unit tests at the bottom of the pyramid. As you move up the pyramid, your tests gets larger, but at the same time the number of tests (the width of your pyramid) gets smaller.

As a good first guess, Google often suggests a 70/20/10 split: 70% unit tests, 20% integration tests, and 10% end-to-end tests. The exact mix will be different for each team, but in general, it should retain that pyramid shape. Try to avoid these anti-patterns:
Just like a regular pyramid tends to be the most stable structure in real life, the testing pyramid also tends to be the most stable testing strategy.