“It is a human right to be able to speak your own language,” says Tania Haerekiterā Tapueluelu Wolfgramm, a Māori and Tongan person who works as an educator and activist in Aotearoa--the Māori name for New Zealand--and other Pacific countries. “You don’t have a culture without the language.”

Tania is one of several dozen Indigenous language speakers, advocates and educators who helped create the tour. Thanks to their contributions, people can click on locations meaningful to Indigenous speakers and hear people offer traditional greetings, sing songs, or say common words and phrases in their languages. 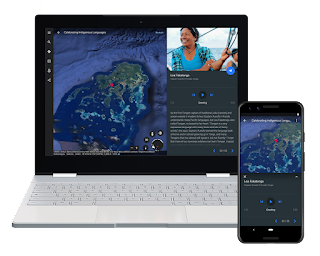 The healing power of speaking one’s own language
The people who recorded audio in their languages and connected Google with Indigenous speakers each have their own story about why revitalizing Indigenous languages strikes a chord for them.

For Arden Ogg, director of Canada’s Cree Literacy Network, and Dolores Greyeyes Sand, a Plains Cree person and Cree language teacher, the focus is on providing resources for language learners. For Brian Thom, a cultural anthropologist and professor at the University of Victoria in British Columbia, the interest grew out of his work helping Indigenous communities map their traditional lands.

Brian asked yutustanaat, a member of the Snuneymuxw First Nation and a language teacher in British Columbia, to record the hul’q’umi’num’ language. “Our language is very healing,” says yutustanaat. “It brings out caring in our people and helps our students be strong, because the language comes from the heart.” In her recording, yutustanaat speaks the traditional hul’q’umi’num’ greeting: ‘i ch ‘o’ ‘uy’ ‘ul’ or “How are you?”

By using their languages—and sharing them with the rest of the world—Indigenous people create closer connections to a culture that is often endangered or has outright disappeared.

Wikuki Kingi, a Māori Master Carver, recorded traditional chants in Te Reo Māori, an Eastern Polynesian language indigenous to New Zealand. He says, “Speaking Te Reo Māori connects me to my relatives, to the land, rivers, and the ocean, and it can take me to another time and place.”

Ensuring that generations to come will hear their languages
“I do this not for myself, but for my children and grandchildren, so that in the future, they’ll hear our language,” says Dolores, who recorded audio in her native Plains Cree.

To ensure that future generations hear and speak Indigenous languages, more needs to be done to support their revitalization. Tania Wolfgramm suggests checking out how her nonprofit organization, Global Reach Initiative &; Development Pacific, uses technology to connect far-flung Indigenous people to their traditional communities—like bringing Google Street View to the remote island of Tonga. Arden Ogg directs people interested in Indigenous languages to the Cree Literacy Network, which publishes books in Cree and English to facilitate language learning. And a video from the University of Victoria suggests five ways to support Indigenous language revitalization, such as learning words and phrases using smartphone apps, and learning the names of rivers, mountains and towns in the local Indigenous language.

This initial collection of audio recordings in Google Earth only scratches the surface of the world’s thousands of Indigenous languages. If you’d like to contribute your language to this collection in the future, please share your interest.