Editor’s note: Today’s post comes from Simon Banton: software professional, Stonehenge enthusiast, and creator of the Stonehenge Barrow Map. With Google Maps Platform products and some help from the Google developer community, Banton built his map in just a few days, compiling the data and adding richer details in his spare time. Discover how you can start using Google Maps Platform to visualize your passion projects.

My journey into mapmaking started when I came across a 200-year-old reference to an oddly deformed, 5,500-year-old skull buried in one of the 300 Neolithic and Bronze Age barrows (burial mounds) found within walking distance of the Stonehenge prehistoric monument in Wiltshire, England. When I can spare time away from my software business, I offer tours around this unique landscape and study the barrows myself. It’s fascinating to imagine who the barrows’ inhabitants were—like the one with the intriguingly deformed skull—and what their lives were like thousands of years ago.
In the countryside around Stonehenge, one challenge is finding barrows and identifying them against records and maps that were created over a 200-year period. Early 1800s researchers published excellent guides to the barrows, but there were no authoritative maps and surveys of the area in those days. If you tried now to find a barrow using 200-year-old guides, modern databases wouldn’t have the same reference numbers. And, of course, there were no online sources that correlated and matched the barrow location data.

This was frustrating, so I pulled together a Google Sheets listing the barrows’ latitudes and longitudes and the numbering systems used by different authorities. I thought somehow this data could be visualized on a map. After some online searching, I discovered that I could use the Maps JavaScript API and the Google Charts “Map” visualization to pull the data from the spreadsheet, and I built the Stonehenge Barrow Map showing all the barrow locations. 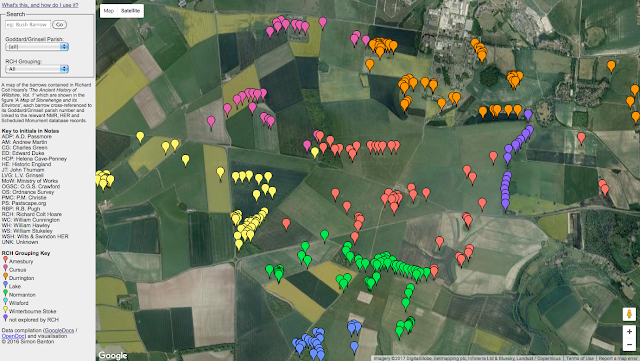 It only took two days for me to create the basic map using the Charts visualization. After that, I spent one evening per week, over six months, adding barrow descriptions and images to the Google Sheet. The developers in the Google Maps forums were quick to answer my questions, such as when I needed help customizing pop-up boxes with information about each barrow. When users click on a point on the map, an info window appears with reference numbers and descriptions from 19th-century and modern-day researchers, links to data from government agencies and historical societies, and images of artifacts removed from barrows.

Using the Visualization Query Language, I added a search box to the map, where people can enter keywords to find barrows by all kinds of criteria, including what artifacts were found. Almost all the barrows have been plundered for their contents in the past few centuries, but happily a great many of these treasures eventually found their way into the wonderful museums in Devizes and Salisbury. 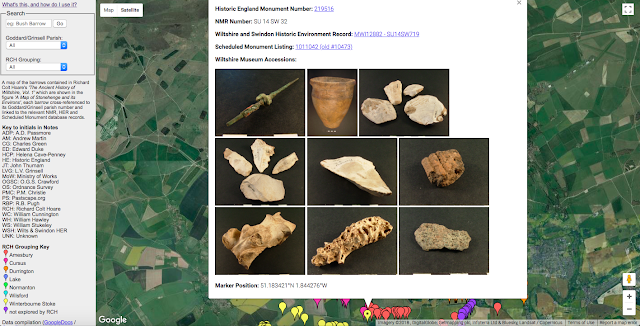 Stonehenge enthusiasts and I use the Google Map when we’re carrying out research or conducting tours, and anyone can use it just to explore the barrows for themselves. We can enter the modern reference number for a barrow, like “Wilsford G30” or “MWI12489”, find it was known to the 19th-century antiquaries as barrow “Normanton 173,” and that it was the one which contained that very odd skull.

Not only are all the research links in one place, but we also get a visualization of the barrows around the Stonehenge landscape. That helps us ponder questions such as why barrows were clustered together, and which materials were buried where and at different times in prehistory.

I’ve had people ask me to expand my map to include the barrows in the Avebury landscape, or even those in the neighbouring counties of Dorset and Hampshire. That’d be an enormous undertaking, so it’s a project for someone else. To help anyone interested in pursuing that goal, I’ve kept the map code as simple as possible. I’ve posted the Google Docs barrow spreadsheet for download so other people can use it as a template for their own maps.

While much about the barrows remains a mystery—such as what happened to the skeleton of the person with the deformed skull—I’d like to think that future researchers, using Google Maps like mine, may help to uncover some of the answers.