Smartphones have become consumers’ trusted shopping companions. Mobile shopping searches surged in 2015, passing desktop for the first time on Thanksgiving and Black Friday.1 This year, we see supershoppers continuing to turn to their phones for research and purchases.

In fact, for many consumers, smartphones have become a “door-to-the-store.” And that is particularly true during the holidays. Seventy-six percent of people who search for something nearby on their smartphone visit a related business within a day.2

As we head into the one of the busiest shopping weeks of the year, Google data reveals how consumers will shop and what they'll buy.

Women drive the mobile web, searching for and buying products at twice the rate of men throughout the entire holiday season. The week of Christmas, however, men are more likely to complete their mobile purchases.3

Consumers are already on the hunt. Top trending product searches for the first two weeks of November include the Nintendo Entertainment System and Hatchimals -- that’s right, stuffed animals that hatch.4
Hatchimals
Nintendo Entertainment System
Baby alive
Trolls
Dji phantom 3 + 4
Sony ps4 pro
Cozmo
Pokemon
Num Noms
RC cars
And while many shoppers can zero in on what they want, others search for inspiration and ideas. Last year, mobile searches related to "unique gifts" grew more than 65% compared to the 2014 holiday season, while mobile searches related to "cool gifts" grew more than 80%.5

On Black Friday, stores are most crowded in the afternoon

Although Black Friday is often associated with early birds, store foot traffic typically peaks in the afternoon between noon and 4:00 p.m.6 But people are shopping all day long. Shopping searches on mobile remain steady throughout the day as shoppers take advantage of Black Friday deals and plan their trips to the store.7 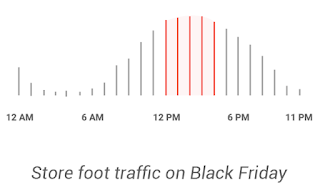 Though Black Friday weekend is the rare retail event that pulls even reluctant shoppers into stores, some areas of the country are more interested in deals than others.

By 10:00 a.m. on Black Friday, more than one-quarter of New England shoppers are already on the hunt for a good deal, having stepped inside a department store or shopping center. The rest of the country lags behind an hour.8 And the same is true on mobile: people living in New Hampshire search for more product-related deals than people in other states.9

The way consumers shop and behave during the holiday season is rapidly changing, from the way they create their gift lists to the way they purchase. Shoppers are proving that both with their fingertips and their feet.

For more data about mobile search trends and shopper foot traffic on Black Friday, check out our infographic “What Google Data Reveals About Black Friday Shoppers.”