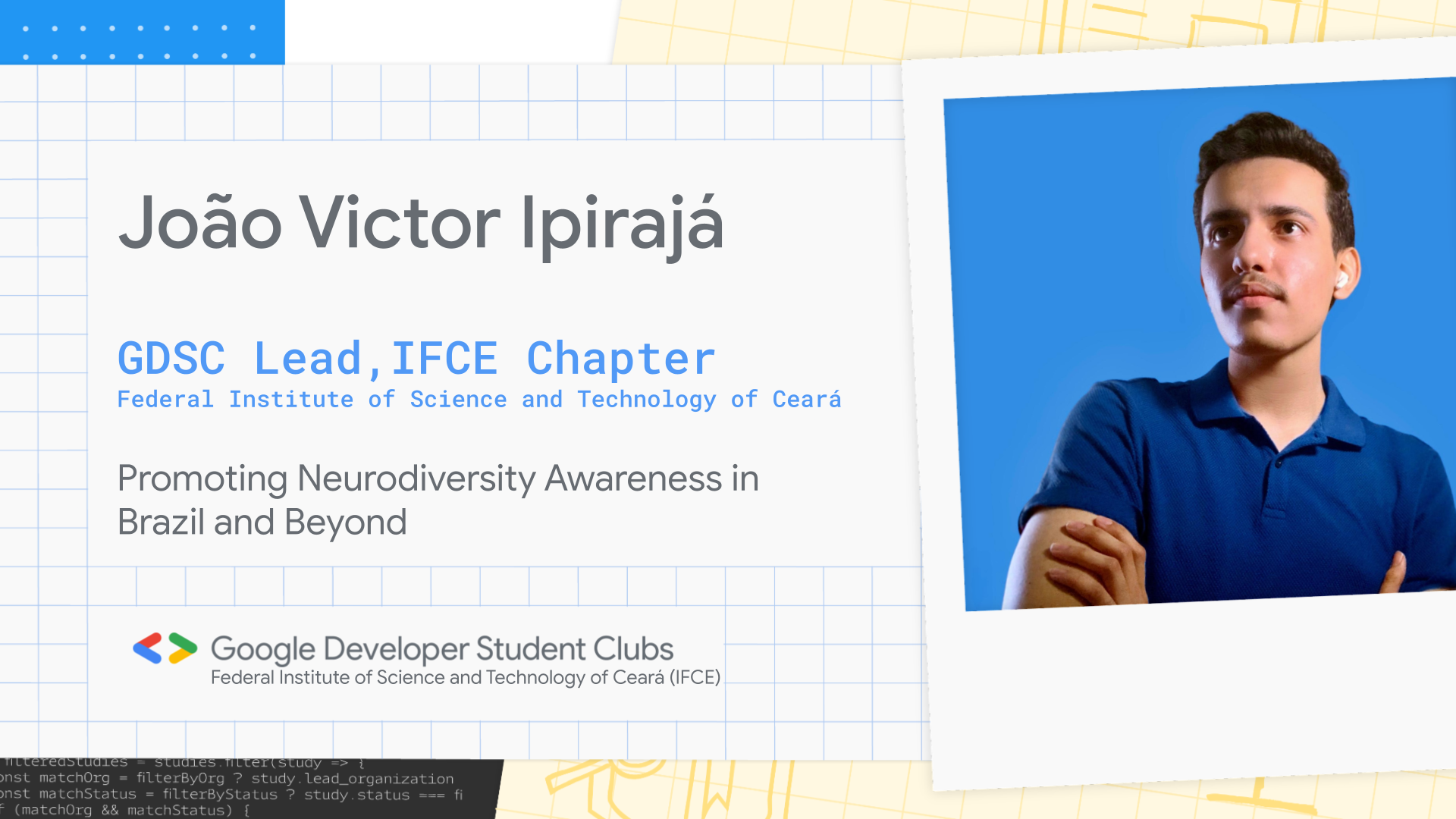 Perceiving that one is not like everyone else can be painful. Yet, the experience can also be illuminating. As a child in Brazil, João Victor Ipirajá, lead of the Google Student Developer Club (GDSC) at the Federal Institute of Science and Technology of Ceará (IFCE), knew he was different. He often felt overwhelmed by physical sensations and missed social cues. When he was eventually diagnosed as being on the autistic spectrum, he was actually relieved. Far from being a limitation, the realization gave him a new perspective on his intellectual strengths—such as his ability to perceive mathematical concepts in a highly visual way and his capacity for logical thinking and computer programming. “I was reborn to a full life shortly after I received this diagnosis,” he said in a video he made about his experiences as a person with ASD.

The World Health Organization estimates that 1 out of every 160 children has an autism spectrum disorder (ASD). Yet despite how relatively common ASD is, the wide diversity of the condition and misunderstandings about neurodiversity can still make it difficult to diagnose.

This newfound understanding of how his mind works helped guide him on his educational path as well as career direction. Instead of attending a traditional high school, which he felt would not play to his natural talents and strengths, João decided to study at IFCE, a technical college that also offered a high school program. There, he learned computer science and computer engineering, picking up new programming languages and honing his developer skills.

But most importantly, he felt he had “discovered his place.” His success at IFCE solving problems, using new tools, and working successfully with others soon outweighed his fears about meeting new people and not fitting in. The experience of finding a community convinced him of the need to encourage others to find theirs--and to help build them as well.

After high school, João decided to continue at IFCE for college to focus on computer engineering, where he learned new programming languages and tools like TensorFlow and Flutter. He also joined IFCE’s GDSC chapter, which further exposed him to new people and ideas. “It’s an honor to be part of this program, meeting people from all over the world and improving my speaking skills, especially in English,” he says. “For me, it’s something magical. I learned so much.”

At the same time, João was beginning to recognize the lack of understanding about neurodiversity in Brazil, even among technical audiences and employers in general. “Some people think we are crazy or we’re unable to do big projects,” he says. Even “good” stereotypes can be harmful--for example, many neurodiverse people have an ability to “hyperfocus” and work or study uninterrupted for hours on end. “People think it’s a superpower,” he says, but such extreme periods of concentration can also be unhealthy and lead to burnout.

Planting the seeds of change with GDSC events and projects

As the IFCE GDSC lead, João decided to concentrate his efforts on expanding awareness of neurodiversity, as well as other types of diversity—sexual, racial, religious, etc.—to help others find the sense of freedom and belonging he has experienced. “Many people don’t feel free to be whoever they want to be,” he says.

The chapter’s efforts include planning speaker sessions with diversity activists and specialists from the community, creating social media content in partnership with IFCE, creating workshops with other Brazilian GDSC chapters, and making diversity a priority when choosing core positions on the team.

He recently spoke at a DevFest event on the topic of “Understanding the autistic spectrum universe,” in which he explained the range of characteristics and abilities autistic people can display. He also wants to do more speaking events in Portuguese to break stereotypes about autism in Brazil specifically. “It’s just a student club, but we are trying to deconstruct stereotypes and prejudice that are so culturally strong in Brazil,” he says.

Cultivating understanding and acceptance in Brazil and beyond

Ultimately, João feels that providing more opportunities and platforms for diverse people will help others. As the community continues to come together, he might be able to help those who have that same sense of difference João remembers having as a child. João and others on his GDSC team especially hope that these efforts will advance a greater understanding around how to elevate and celebrate members of marginalized groups in his home country. However, his goals go beyond mere acceptance: he notes that people who feel more comfortable about who they are also feel more confident to fully participate in all aspects of society. People with diverse abilities and characteristics offer unique skills and perspectives that can also translate into advantages, especially among technical audiences and employers.