Thus far in 2015 we have seen a 180% increase in the number of sites getting hacked and a 300% increase in hacked site reconsideration requests. While we are working hard to help webmasters prevent hacks in the first place through efforts such as blog posts and #NoHacked campaigns, we recognize that our reconsideration process is an important part of making recovering from a hack faster and easier. Here's what we've been focussing on:

Last year we launched the "Note from your reviewer" feature in our reconsideration process. This feature enables us to give specific examples and advice tailored to each case in response to a reconsideration request. Thus far in 2015 we have sent a customized note to over 70% of webmasters whose hacked reconsideration request was rejected, with specific guidance on where and how to find the remaining hacked content. The results have been encouraging, as we've seen a 29% decrease in the average amount of time from when a site receives a hacked manual action to the time when the webmaster cleans up and the manual action is removed.

We have also completed our second #NoHacked campaign, with more detailed help on preventing and recovering from hacks. In the campaign, we focused on ways to improve the security on your site as well as ways to fix your site if it was compromised. You can catch up by reading the first post.

2. Better tools including auto-removal of some hacked manual actions

Last year we launched the "Fetch and Render" feature to the Fetch as Google tool, which allows you to see the website exactly as Googlebot sees it. This functionality is useful in recovering from a hack, since many hackers inject cloaked content that's not visible to the normal user but obvious to search engine crawlers like Googlebot.

This year we also launched the Hacked Sites Troubleshooter in 23 languages which guides webmasters through some basic steps to recover from a hack. Let us know if you have found the troubleshooter useful as we're continuing to expand its features and impact. 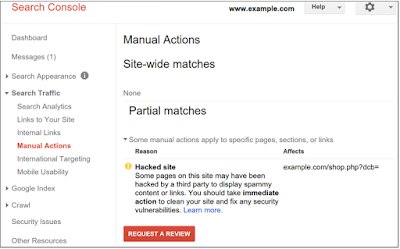 Example of a Hacked site manual action on a Partial match: if our systems detect that the hacked content is no longer present, in some cases we will automatically remove the manual action

3. Soliciting your feedback and taking action

Our improved communication and tools have come directly from feedback we've collected from webmasters of sites that have been hacked. For example, earlier this year we hosted webmasters who have been through the hacked reconsideration process in both Mountain View, USA and Dublin, Ireland for brainstorming sessions. We also randomly sampled webmasters that had been through a hacked reconsideration. We found that while only 15% of webmasters were dissatisfied with the process, the main challenges those webmasters faced were in clearer notification of their site being hacked and clearer guidance on how to resolve the hack. This feedback contributed directly our more detailed blog post on hacked recovery, and to much of the content in our latest #NoHacked campaign. 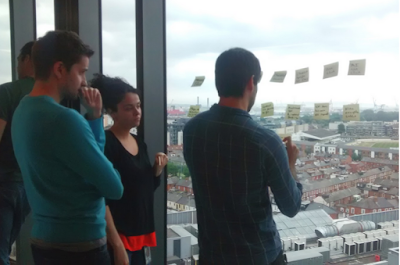