With the latest release of Android Wear, wearables with built-in GPS like the Sony Smartwatch 3 can now give you a GPS location update directly from the wearable, without a paired phone nearby. You can now build an app like MyTracks that lets a user track their run even when they leave their phone at home. For wearable devices that do not have built-in GPS, a software solution has always existed in Google Play Services that automatically uses the GPS from your connected phone. 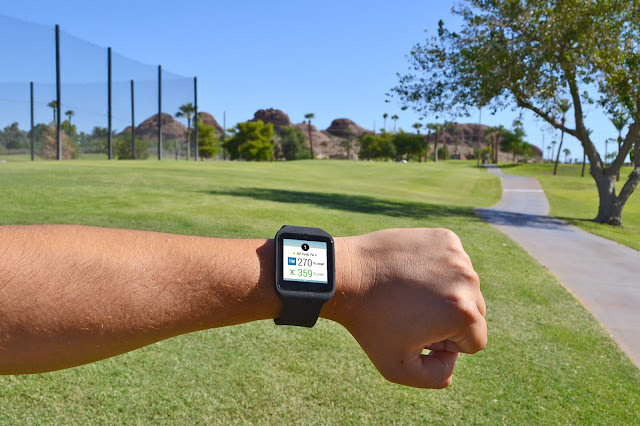 The Golfshot wearable app uses built-in GPS to calculate your distance to the next hole, even when you don’t have your phone with you.

Implementing GPS location updates for Android Wear is simple. On the wearable, use the FusedLocationProviderApi from Google Play services to request location updates. This is the same API that has been available on mobile, so you can easily reuse your existing code and samples.

One case you’ll need to handle is if the phone is not connected to the wearable and the wearable does not have built-in GPS. You will need to detect this and provide a graceful recovery mechanism, such as a message telling the user to bring their phone with them. However, for the most part, deciding which GPS to use, and sending the position from the phone to the wearable, is handled automatically. You do not need to deal with the low-level implementation details yourself.

When writing an app that runs on the wearable, you will eventually want to synchronize the data it collects with the paired phone. When the wearable is being taken out for a run, especially with the built-in GPS, there may not be a phone present. So you will want to store your location data using the Data Layer API, and when the phone reconnects with the wearable later, the data will be automatically synchronized.

For more details about how to use the location API, check out the extensive documentation and sample here.