https://lh3.googleusercontent.com/98caSTOQwwVxEgkZhqJYZ9vS8moMUrgIRy64GU0hCu0JiJW6yPmyNhvkn3TJKeYYKAQQotAZtRJoax5yIHBhfV3pX0z16oIYSzUncD4z6ntIy-8Pj2FzOuMQrD1g2qtp7jjW0TmI" style="border: none; transform: rotate(0rad);" width="235 Vinay Goel Product Management Director ”Google Station”
In 2015, the RailTel Wi-Fi project — Google’s partnership with Indian Railways and Railtel — started offering Indians around the country access to high-speed Wi-Fi at train stations. Since that first launch of a single station in Mumbai, there are now over 270 stations online, all towards a goal of eventually hitting 400. Millions of people are getting online each month, many of them for the very first time. Seeing this tremendous impact led us to spin off the idea into an access initiative called Google Station, which aims to bring fast, reliable and easy to use Wi-Fi to more people in more places around the world.
Last week marked a big step for Google Station: We are now providing Google Station hotspots in the city of Pune, in partnership with Larsen & Toubro, as part of Pune Smart City Development Corporation Limited’s Smart City project. This is the first deployment of Google Station outside of the train stations, and it means that the people of Pune can get online within seconds to message friends, pay bills, shop online, watch music videos — and millions of other things — at gardens, hospitals, police stations, and offices around the city. 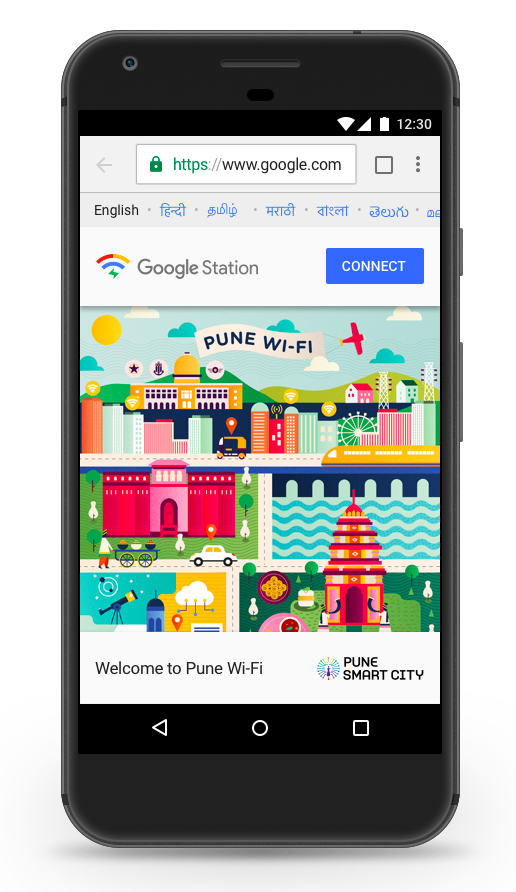 Public Wi-Fi alone, of course, does not make a city “smart,” but having reliable Internet connectivity across multiple central locations means that people can use their smartphones to make the most out of Pune’s other smart city services, which include improved tracking of public buses, opportunities for digital learning, and participation in digital governance. In our research of Google Station usage so far, we have found that an abundance of access allows Indian smartphone users to try out far more services — and of course, do much more data-intensive activities such as watching high-quality videos. Access to Google Station will hopefully give the millions people of Pune more ease of mind about using the Internet and not fretting about finding the data to explore the new digital services.

The first 150 Google Station hotspots are already operational in Pune (list of locations), and we are currently testing the network based on performance to improve user experience. We built Google Station to be both the highest-quality and simplest Wi-Fi service for users and the easiest for partners to deploy — and we think this makes Google Station a great connectivity partner for the growing number of Indian smart cities. We’re looking forward to helping people in Pune get fast and reliable access to everything the internet has to offer.
Posted by Vinay Goel, Product Management Director, Google Station