We know that you have the tough job of quickly and responsively serving your users, while also simultaneously defending your internet-facing services from malicious attacks. That’s why we announced Cloud Armor, a new DDoS and application defense service, at the CEO Security Forum in New York last week. It’s based on the same technologies and global infrastructure that we use to protect Google services like Search, Gmail and YouTube.


Our security experts work around the clock to defend Google’s core services from a wide variety of malicious attacks. Metrics from DDoS attacks targeting Google services over the past decade reveal attack volumes have increased exponentially across several axes: bits per second (bps), packets per second (pps) and HTTP(S) queries per second (qps).

“Absorbing the largest attacks requires the bandwidth needed to watch half a million YouTube videos at the same time... in HD.”

Defense is a collaborative effort.


“We work closely with several industry groups to track emerging threats, allowing us to both protect ourselves and others. In addition, we host krebsonsecurity.com and other frequent targets to ensure we are among the first to see new attack methods. This lets us design defenses and dismantle botnets before they have a chance to grow.”

Sharing resources across Google and Google Cloud services allows us to easily absorb the largest attacks, and also ensure that an attack on one customer doesn’t affect others.


Cloud Armor works in conjunction with global HTTP(S) load balancing and enables you to deploy and customize defenses for your internet-facing applications. Similar to global HTTP(S) load balancing, Cloud Armor is delivered at the edge of Google’s network, helping to block attacks close to their source. It's built on three pillars: a policy framework, a rich rules language and global enforcement infrastructure.


"Cloud Armor is a great example of how Google continues to innovate on its pervasive defense-in-depth security strategy, providing a rich layer of security control that can be managed at the network edge."


With Cloud Armor, you can:
With the above foundation in place, we look forward to expanding Cloud Armor’s capabilities in the coming months.


Cloud Armor configuration is driven by security policies. To deploy Cloud Armor, you must create a security policy, add rules, and then attach this policy to one or more HTTP(S) load balancing backend services.

A Cloud Armor security policy is comprised of one or more rules, where each rule specifies the parameters to look for in the traffic, the action to take if the traffic matches these parameters, and a priority value that determines the position of this rule in the policy hierarchy.

Cloud Armor allows you to create multiple policies per project. You can customize the defense for a subset of backend services by creating a policy specifically for these services.
Below, we show how to configure IP Blacklists and whitelists using Cloud Armor:


Cloud Armor rules language enables you to customize defenses for your specific requirements. Often attackers use multiple well-known and custom malicious patterns to attempt bringing your service down. Custom rules enable you to configure specific attack patterns to look for in the traffic and then block this traffic at scale.

Here’s an example of a custom rule to defend against an attack seen to be originating from US and containing a specific cookie and user-agent.

Below, you can see the SQLi defense rule, along with other rules, in the policy: 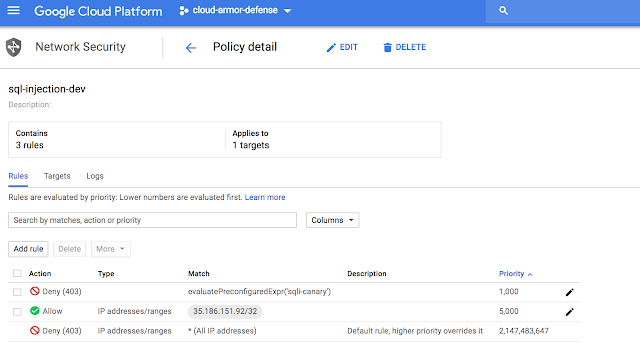 You can request Alpha access to these features by signing up using this form.

Visibility into blocked and allowed traffic


You can view the allowed and blocked traffic in Stackdriver as shown below: 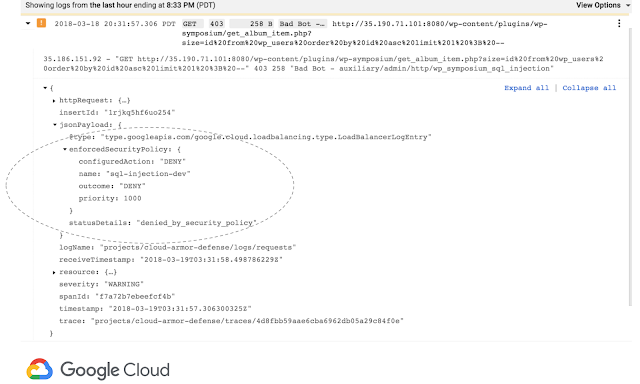 
We have a rich ecosystem of security providers who offer solutions that complement Cloud Armor’s capabilities. You can use these in conjunction with global HTTP(S) load balancing and Cloud Armor to build a comprehensive security solution. Learn more about our security partners here.


Cloud Armor is for everyone deploying internet-facing services in Google Cloud. Learn more by visiting the Cloud Armor website. We look forward to your feedback!