Trips to the laundromat with mom were a weekly staple of my childhood. I absolutely hated it. We’d spend maybe two hours there but, as any kid knows, two hours can seem like an eternity. I’d enviously watch the more rambunctious kids ride around in the carts, wishing that were me. My mother could see me eyeballing the carts and she’d quickly tell me “Ni se atreve! (Don’t you dare!).” I spent hours getting dizzy as I watched the washers spin round and round, flashes of color blurred together.

When I first heard of Libraries Without Borders’ Wash and Learn Initiative (WALI)  I thought, “Whoa! That’s such a good idea!.” WALI aims to bridge the digital divide by bringing technology and library programming to laundromats. Some stuff just makes sense. Peanut butter and jelly. Cereal and milk. Laundromats and community resources. WALI meets the community where they are and acts as a facilitator to community resources already available.

As the San Antonio Project Coordinator for WALI, I am tasked with the duty of building partnerships and bringing them to the laundromat. I started my new role by conducting interest surveys at the laundromats. What did community members want to see in the laundromat? Did they want to learn about digital literacy? How to improve their health? How to do their taxes? Their answers served as my guide for programming and partners to bring in to the laundromat. I became a regular fixture in the laundromat and the customers started recognizing me.

Before I knew it, we were installing the technology into the laundromat — a Chromebook and two tablets for the customers to use while they are waiting for their clothes. In September, we ran on our first programming session, a children’s storytime. It was quiet but caught the attention of customers. And, today, we are officially launching our programming schedule with our anchor partners, Google Fiber, San Antonio Public Library and Bexar County BiblioTech, with more partners to come.

The impact of WALI hit me at a literacy programming session just a few days ago. A local librarian read to one of the kids at the laundromat while his brother, curious but shy, hid under a table and listened in. I watched them during story time and thought about how that could have been me. The day before, at our Culebra site, I helped a woman log in to a website that would help her learn English, and couldn’t help but think of my mom.

These opportunities are universal. WALI is about giving people what they need in an unexpected but necessary place. Libraries Without Borders means we go where people are, so you’ll find me at the laundromat. 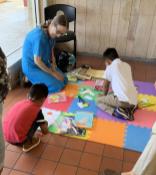