Today we’re starting to roll out Android 6.0 Marshmallow to Nexus users. Of course, the new Nexus 5X and 6P will ship with Android 6.0, straight from the factory. Android Marshmallow is the sweetest, smartest Android version yet: Now on Tap serves up assistance when you need it, battery-smart features keep your device going longer, and new app permissions give you even more control.
Assistance in the moment
Get help with what you need no matter which app you’re in. Now on Tap — a feature unique to Android Marshmallow — stays on task alongside you, instantly pulling up relevant info and helping you get more done. Say you receive an email about meeting a friend at the Central Park Zoo. Just tap and hold on the home button, and Now on Tap will assist you by providing links to information about the zoo, shortcuts to relevant apps and even suggest a calendar entry for the date, time and location. 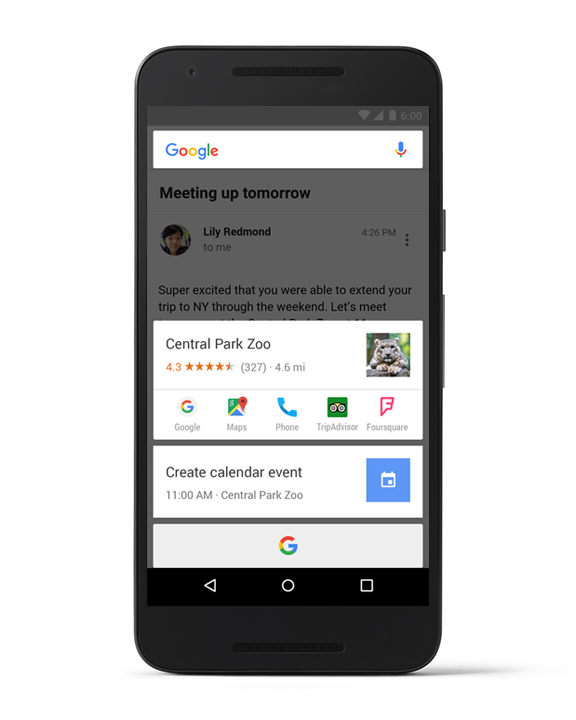 A longer lasting device thanks to a smarter, more efficient battery
Improving battery life isn’t just about building a bigger battery. It’s also about improving the way your device uses the charge it has. With Android Marshmallow, we’ve added two new features which dramatically decrease your device’s thirst for power.
With Doze, Android recognizes when your device is idle and automatically goes into a deep sleep state to conserve power. To see how well it works, we took a bunch of Nexus 5s and Nexus 6s, put Lollipop on half of them and Marshmallow on the other half, and measured standby battery life. The screen-off time of these devices running Marshmallow lasted 30%* longer on average!  So even if you forget to plug in your phone before bed, your phone’s alarm clock will still ring. The other new battery-conserving feature is called App Standby. This puts your seldom used apps into a reduced activity state to conserve battery for the apps you use more frequently.
More choice and control to protect your privacy
Android Marshmallow gives you the ability to customize and control which capabilities you give apps. With the new app permissions model, you pick and choose which permissions to grant apps at the time of use. Apps designed for Android Marshmallow only ask for a permission at the time it’s needed to use a feature. You can deny any permission and still continue to use the app. In addition, we’ve added new settings for permissions that allow you to turn on and off any permission, for any app, at any time. 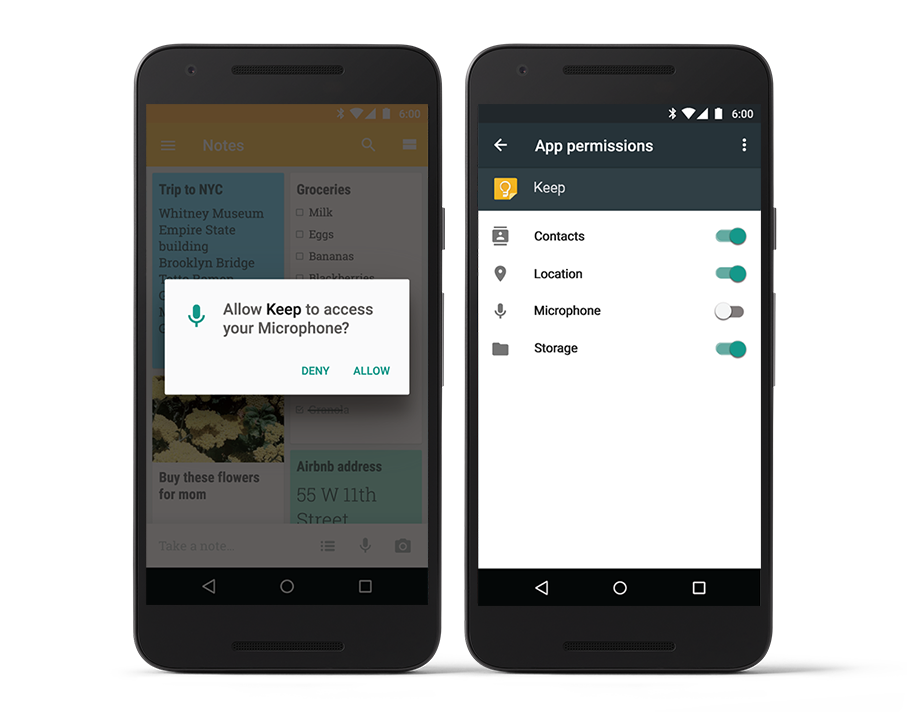 Simplified security with your fingerprint
For fingerprint sensor enabled devices, Android Marshmallow gives you a new way to protect your device. On Marshmallow, your fingerprint is the gatekeeper to unlocking your device, authorizing transactions in the Google Play Store, signing into 3rd party apps, and zipping through checkout with Android Pay. 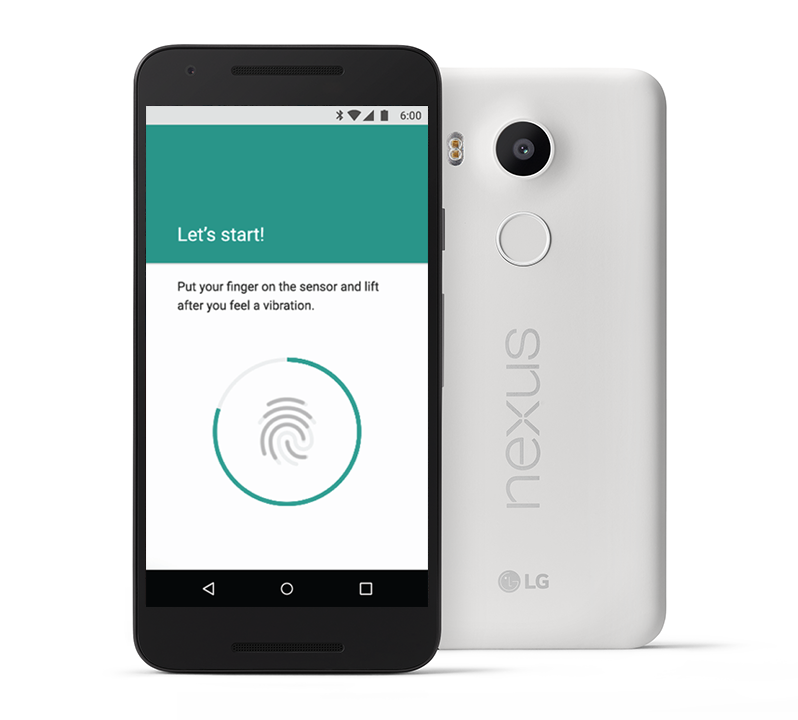 Set up your new device lickety-split
On Lollipop, Android made it easier to set up your new phone from your old one, migrating your apps and app data. With Android Marshmallow, you can breeze through setup on your Android TV or tablet too. Say "OK Google, set up my device" from your phone and you’ll quickly be up and running. For TV, we'll even transfer over your Wi-Fi passwords. 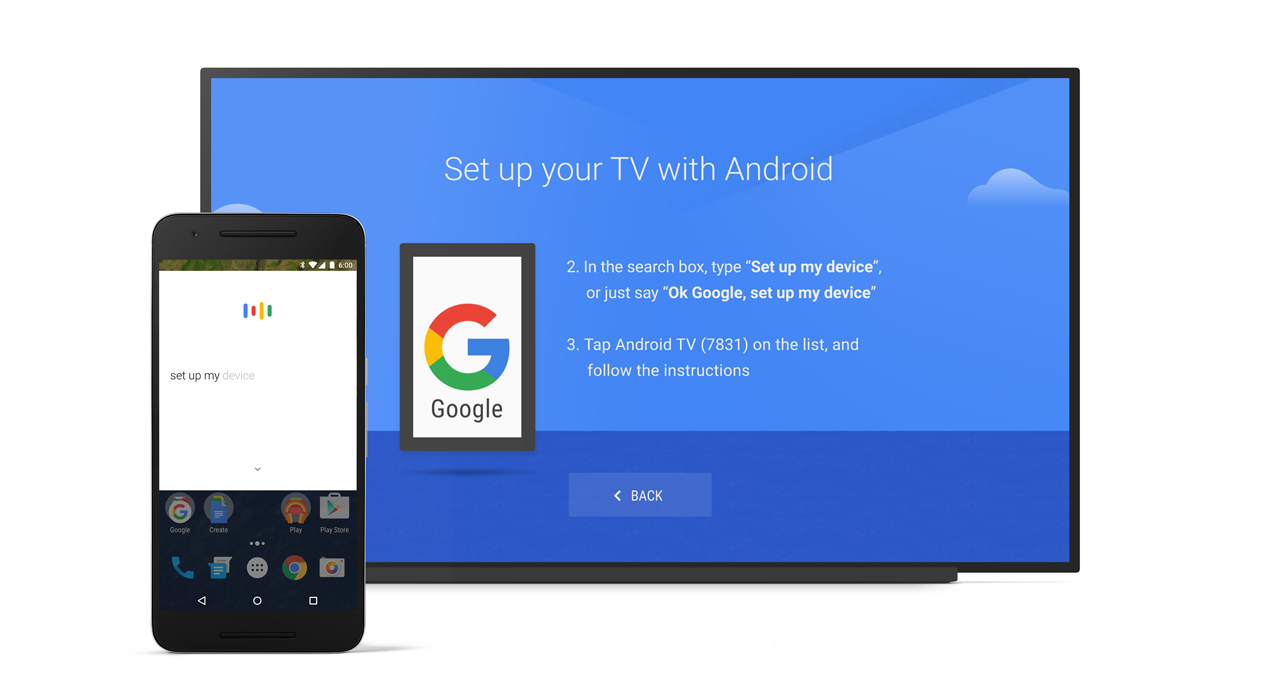 Coming to a device near you, starting today
Nexus 5, Nexus 6, Nexus 7 (2013), Nexus 9 and Nexus Player will get an over the air software update** to Android 6.0 Marshmallow. In addition to the new Nexus 5X and 6P, keep your eyes peeled for other new devices shipping with Android 6.0. Finally, we know many of you take your devices to work. To learn more about security and other work features in Android Marshmallow, register for the Android for Work Live online event on Nov. 4th. This is just a taste of Marshmallow but you can learn s’more on android.com/marshmallow!
Posted by Brian Rakowski, VP of Product Management, Android
*Actual battery performance will vary and depends on many factors including signal strength, network configuration, battery age, operating temperature, features selected, device settings, and voice, data, and other application usage patterns.
**The Nexus update to Android 6.0 Marshmallow occurs in stages and some carriers will receive the update later than others.