The OpenCensus project has grown considerably over the past year, and we’ve had several significant announcements in the first half of 2019, including the project’s merger into OpenTelemetry. The features discussed in this post will move into OpenTelemetry over the coming months.

For those who aren’t already familiar with the project, OpenCensus provides a set of libraries that collect distributed traces and application metrics from your applications and send them to your backend of choice. Google announced OpenCensus one year ago, and the community has since grown to include large companies, major cloud providers, and APM vendors. OpenCensus includes integrations with popular web, RPC, and storage clients out of the box, along with exporters that allow it to send captured telemetry to your backend of choice.

We’ve recently enhanced OpenCensus with two new components: an optional agent that can manage exporters and collect system telemetry from VMs and containers, and an optional collector service that offers improved trace sampling and metrics aggregation. While we’ve already demonstrated these components on stage at Kubecon and Next, we’re now ready to show them more broadly and encourage their use. 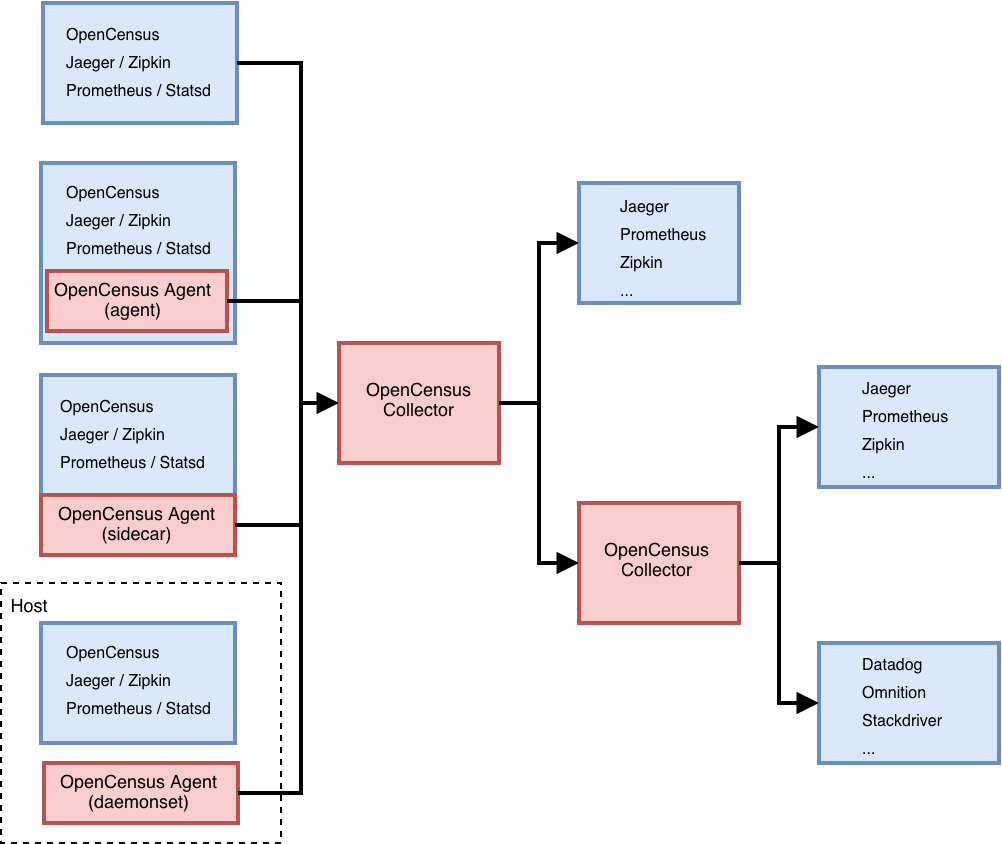 The OpenCensus agent is an optional component that can be deployed to each of your virtual machines or kubernetes pods. The agent receives traces and metrics from OpenCensus libraries, collects system telemetry, and can even capture data from a variety of different sources including Zipkin, Jaeger, and Prometheus. The agent has several benefits over exporting telemetry directly from the OpenCensus libraries:
While directly exporting to a backend will remain a common use case for developers, we expect most larger deployments to start using the OpenCensus agent. The agent is currently in beta and we expect it to reach production ready quality and feature completeness later this year.

When to Use Each

As mentioned above, both the agent and collector are optional, and we expect that some developers will continue to export traces and metrics directly from the OpenCensus libraries. However, we expect both to become quite popular in the following scenarios:

Both the agent and collector are currently in beta, though we know that several companies are already using them in their production services. We’re working towards the 1.0 release of each of these, and we expect this to occur by the end of Q2.

In the meantime, please join us on GitHub, Gitter, and in our monthly community meetings!