Whether you're playing a game or watching a video, VR lets you step inside a new world and become the hero of a story. But what if you want to tell a story of your own? 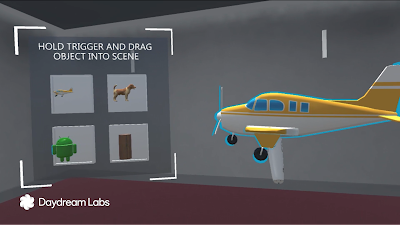 Producing immersive 3D animation can be difficult and expensive. It requires complex software to set keyframes with splined interpolation or costly motion capture setups to track how live actors move through a scene. Professional animators spend considerable effort to create sequences that look expressive and natural.

At Daydream Labs, we've been experimenting with ways to reduce technical complexity and even add a greater sense of play when animating in VR. In one experiment we built, people could bring characters to life by picking up toys, moving them through space and time, and then replay the scene.

As we saw people play with the animation experiment we built, we noticed a few things:

The need for complex metaphors goes away in VR: What can be complicated in 2D can be made intuitive in 3D. Instead of animating with graph editors or icons representing location, people could simply reach out, grab a virtual toy, and carry it through the scene. These simple animations had a handmade charm that conveyed a surprising degree of emotion.

The learning curve drops to zero: People were already familiar with how to interact with real toys, so they jumped right in and got started telling their stories. They didn't need a lengthy tutorial, and they were able to modify their animations and even add new characters without any additional help.

People react to virtual environments the same way they react to real ones: When people entered a playful VR environment, they understood it was safe space to play with the toys around them. They felt comfortable performing and speaking in funny voices. They took more risks knowing the virtual environment was designed for play.

To create more intricate animations, we also built another experiment that let people independently animate the joints of a single character. It let you record your character’s movement as you separately animated the feet, hands, and head — just like you would with a puppet.

VR allows us to rethink software and make certain use cases more natural and intuitive. While this kind of animation system won’t replace professional tools, it can allow anyone to tell their own stories. There are many examples of using VR for storytelling, especially with video and animation, and we’re excited to see new perspectives as more creators share their stories in VR.