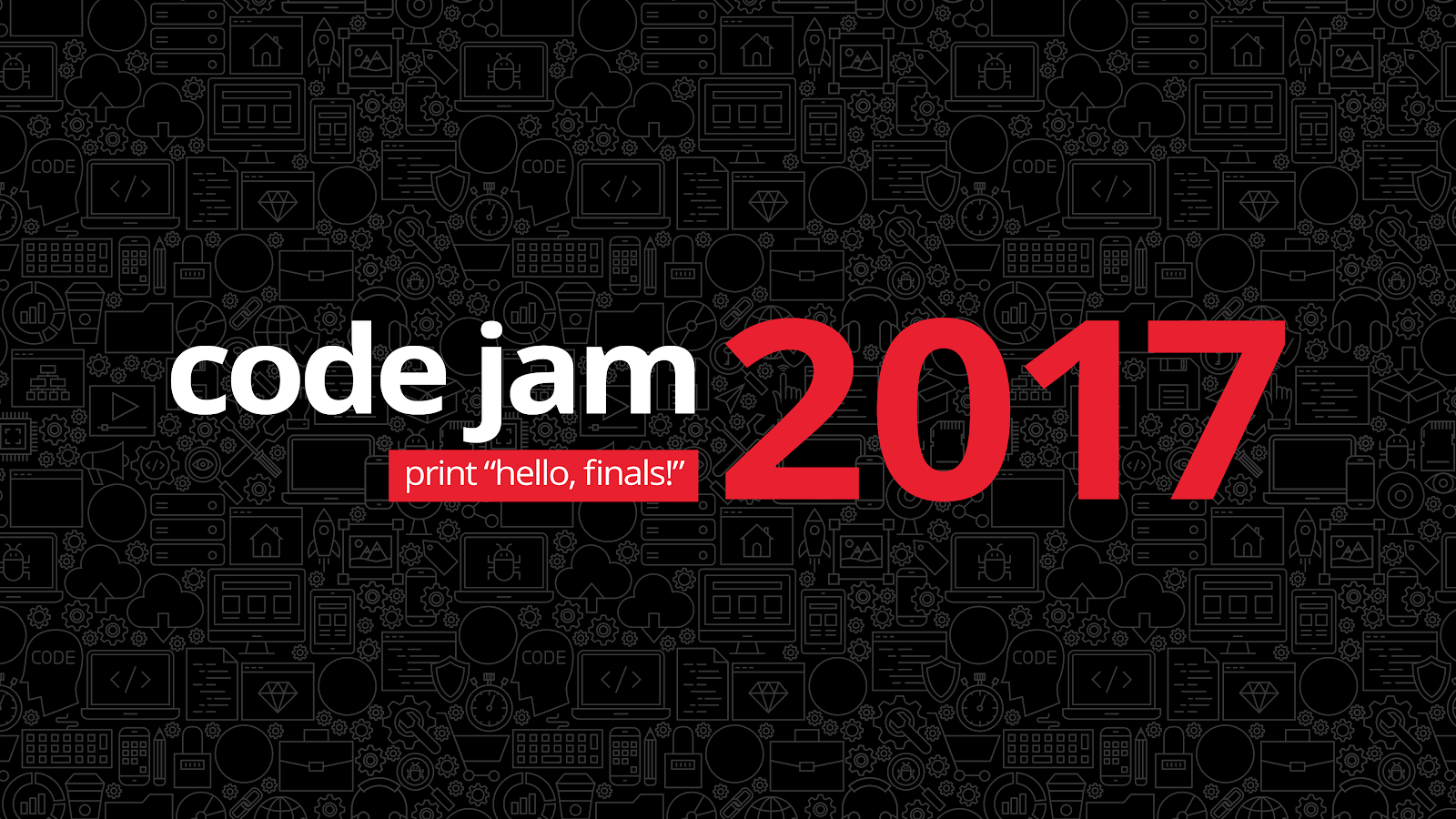 From April through June, tens of thousands of Code Jammers battled through programming challenges involving pancakes, French cuisine, unicorns, medical nanobots, and the scheduling difficulties faced by new parents, to name just a few. Our contestants came from all over the globe, from Saudi Arabia to Svalbard, using programming languages ranging from C++ to Go to LOLCODE.

For the first time, we included some Distributed Code Jam problems in which our system could not be trusted! For example, in one problem, contestants knew that asking a machine in our system for a certain piece of data would make that machine start behaving as if it were broken, but they did not know which piece of data would cause this to happen, and they had to figure it out via experimentation and then work around the issue. But this didn't faze our contestants, who are becoming more comfortable with distributed programming each year.

When the dust settled after our last online rounds, we had 26 Code Jam finalists and 21 Distributed Code Jam finalists. On August 10 and 11, these expert coders will compete for five-figure cash prizes in our onsite World Finals at Google's Dublin, Ireland office.

In the Finals, competitors face five or six very tough problems that often require markedly different approaches and insights. Gennady.Korotkevich of Belarus has won the last three years' Code Jams, but he will have to work hard to overcome rivals like the Philippines' kevinsogo, who beat Gennady in this year's semifinal Code Jam Round 3. And that's to say nothing of the 24 other strong contestants, who are eager to unseat the two favorites!

Google's Distributed format is relatively new and rare on the competitive programming circuit, and it tests a somewhat different skillset. South Africa's bmerry, who has won every Distributed Code Jam contest so far, will be looking to ‘three-peat’ as champion. This year, for the first time, Bruce has the unenviable extra challenge of contending with Gennady in the Distributed final round. Four other contestants qualified for both tournaments, so for the first time it is possible that someone could take both titles in the same year.

You can experience the magic of the World Finals by watching the livestream of the Code Jam contest on Friday, August 11. Our veteran Code Jam author (and Google infrastructure engineer) John Dethridge will return as a commentator, and he will be joined by Dublin-based ads site reliability engineer Rita Lu. John and Rita will talk the audience through our competitors' backgrounds and general Code Jam strategy, and they will provide a live analysis of the results as they roll in. The standings can change in the blink of an eye, and it is not uncommon to see critical submissions in the last few moments of a round!

The livestream will also feature interviews with Googlers from Code Jam — be on the lookout for an interview with this year's three Code Jam interns; they’ll share accounts of what the #GoogleInterns experience is like. We hope many of you will join the Finals excitement by tuning into the livestream, watching the scoreboard unfold at g.co/codejam, and asking live questions on social @CodeJam (we promise to answer as many as we can). We'll see you there!