At Google Cloud Next ‘17, we announced support for PostgreSQL as part of Google Cloud SQL, our managed database service. With its extensibility, strong standards compliance and support from a vibrant open-source community, Postgres is the database of choice for many developers, especially for powering geospatial and mobile applications. Cloud SQL already supports MySQL, and now, PostgreSQL users can also let Google take care of mundane database administration tasks like applying patches and managing backups and storage capacity, and focus on developing great applications. 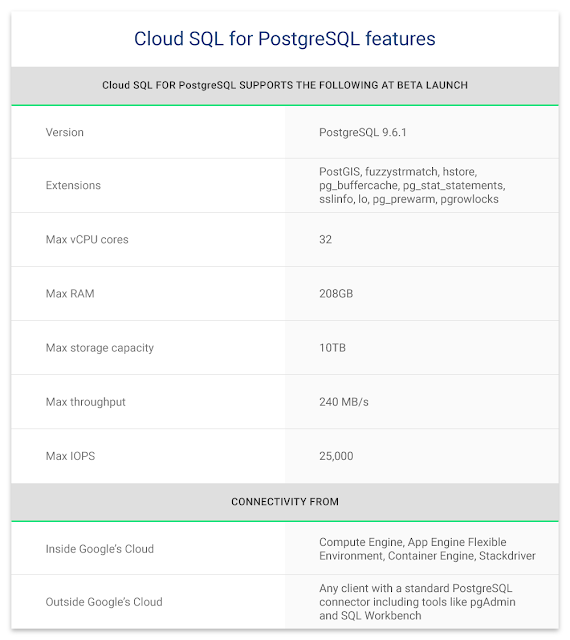 We’re continuing to improve Cloud SQL for PostgreSQL during beta. Watch for the following:

Using deep-learning to make sense of vast amounts of image data from Google Earth Engine, NASA, and other satellites, Descartes Labs delivers invaluable insights about natural resources and human population. They provide timely and accurate forecasts on such things as the growth and health of crops, urban development, the spread of forest fires and the availability of safe drinking water across the globe.

Cloud SQL for PostgreSQL integrates seamlessly with the open-source components that make up Descartes Labs’ environment. Google Earth Engine combines a multi-petabyte catalog of satellite imagery and geospatial datasets with planetary-scale analysis capabilities and makes it available for scientists, researchers and developers to detect changes, map trends and quantify differences on the Earth's surface. With ready-to-use data sets and an API, Earth Engine data is core to Descartes Labs’ product. Combining this with NASA data and the popular OpenStreetMap data, Descartes Labs takes full advantage of the open source community.

Descartes Labs’ first application tracks corn crops based on a 13-year historical backtest. It predicts the U.S. corn yield faster and more accurately than the U.S. Department of Agriculture.

Descartes adopted Cloud SQL for PostgreSQL early on because it allowed them to focus on developing applications rather than on mundane database management tasks. “Cloud SQL gives us more time to work on products that provide value to our customers,” said Tim Kelton, Descartes Labs Co-founder and Cloud Architect. “Our individual teams, who are building micro services, can quickly provision a database on Cloud SQL. They don't need to bother compiling Geos, Proj4, GDAL, and Lib2xml to leverage PostGIS. And when PostGIS isn’t needed, our teams use PostgreSQL without extensions or MySQL, also supported by Cloud SQL.”

According to Descartes Labs, Google Cloud Platform (GCP) is like having a virtual supercomputer on demand, without all the usual space, power, cooling and networking issues. Cloud SQL for PostgreSQL is a key piece of the architecture that backs the company’s satellite image analysis applications.
In developing their newest application, GeoVisual Search, the team benefited greatly from automatic storage increases in Cloud SQL for PostgreSQL. “Ever tried to estimate how a compressed 54GB XML file will expand in PostGIS?” Tim Kelton asked. “It’s not easy. We enabled Cloud SQL’s automatic storage increase, which allows the disk to start at 10GB and, in our case, automatically expanded to 387GB. With this feature, we don’t waste money or time by under- or over-allocating disk capacity as we would on a VM.”
Because the team was able to focus on data models rather than on database management, development of the GeoVisual Search application proceeded smoothly. Descartes’ customers can now find the geospatial equivalent of a needle in a haystack: specific objects of interest in map images.

The screenshot below shows a search through two billion map tiles to find wind turbines.
Tim’s parting advice for startups evaluating cloud solutions: “Make sure the solution you choose gives you the freedom to experiment, lets your team focus on product development rather than IT management and aligns with your company’s budget.”

See what GCP can do for you


Sign up for a $300 credit to try Cloud SQL and the rest of GCP. Start with inexpensive micro instances for testing and development. When you’re ready, you can easily scale them up to serve performance-intensive applications. As a bonus, everyone gets the 100% sustained use discount during beta, regardless of usage.

Our partner ecosystem can help you get started with Cloud SQL for PostgreSQL. To streamline data transfer, reach out to Alooma, Informatica, Segment, Stitch, Talend and Xplenty. For help with visualizing analytics data, try ChartIO, iCharts, Looker, Metabase and Zoomdata.


"PostgreSQL is one of Segment’s most popular database targets for our Warehouses product. Analysts and administrators appreciate its rich set of OLAP features and the portability they’re ensured by it being open source. In an increasingly “serverless” world, Google’s Cloud SQL for PostgreSQL offering allows our customers to eschew costly management and operations of their PostgreSQL instance in favor of effortless setup, and the NoOps cost and scaling model that GCP is known for across their product line."  — Chris Sperandio, Product Lead, Segment

"At Xplenty, we see steady growth of prospects and customers seeking to establish their data and analytics infrastructure on Google Cloud Platform. Data integration is always a key challenge, and we're excited to support both Google Cloud Spanner and Cloud SQL for PostgreSQL both as data sources as well as targets, to continue helping companies integrate and prepare their data for analytics. With the robustness of Cloud Spanner and the popularity of PostgreSQL, Google continues to innovate and prove it is a world leader in cloud computing."  — Saggi Neumann, CTO, Xplenty


No matter how far we take Cloud SQL, we still feel like we’re just getting started. We hope you’ll come along for the ride.