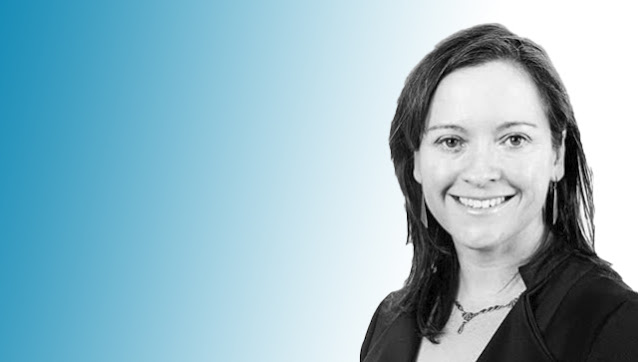 Editor's Note: For Women's History Month, we're profiling some of the powerful, dynamic and creative Canadian women at Google.
Sylvie LaPerrière believes in the power of a blank canvas. She always knew she would pursue a career that didn’t yet exist. Today, she is quite literally a “builder of the internet,” through fibre optic submarine cables — empowering communities around the world with access to the internet.
When asked what advice she gives to people thinking about their future career paths, she unequivalently says that they need to think big and think about a career that might not even exist... yet. She believes you have the chance to become a craftsperson and the masterpiece is up to you! And for Sylvie, that masterpiece has led her to become a Strategic Negotiator, leading a global team while being based out of our Montréal office.
How would you describe your job at a dinner party to people who don't work in tech?
I am a builder of the internet. Specifically of the infrastructure that houses and makes part of the internet. Think of it like building a railroad with tracks that will connect communities, but instead we are building the internet with underwater submarine cables that will connect communities.
In my specific role, as a Strategic Negotiator, I lead a global team that helps secure the partnerships with telecommunication mobile operators and internet players that will enable Google to build internet capacity all over the world.
What is your favourite part about your role?
I love developing new markets and helping bring the internet to people around the world. It’s something that I have been doing for the past 25 years, and still makes me get up enthusiastic each morning. It’s exciting because the work we do hasn’t been done before — there’s a lasting construct that’s empowering millions of people. The impact of our work spans beyond the project, and I’m fortunate to be participating in something that is much bigger than me.
Is there a project that you are particularly proud of?
Over the past couple of years I’ve been focused on a project bringing a subsea cable, Equiano from Portugal to South Africa. As you know, Africa is a very vast continent with almost 1.3 billion people, but only 600 million are online. Based on our traffic projections we were able to determine that there is not enough internet infrastructure to meet the needs of their population — which is where my team came in. I’m really proud of the work that we’ve been doing on this project and the number of countries we’ll be able to impact and empower to stay connected.
Why did you choose to pursue a career in tech?
I always had an inkling that I would do something that didn’t yet exist. I never wanted to box myself into a specific job or role, and the idea of a blank canvas has always been very exciting to me. When I was in business school at HEC Montréal, I studied information systems, which was something that I was intrigued by — back then, it was the future! After my studies, I had the chance to work for a international telecom company and I immediately knew this was the area I wanted to be in. I thought, wow, submarine cables that connect continents! This is awesome. I also always knew I wanted to do something international, so when I was asked to join Google I jumped at the opportunity. And right when I started working here, it was the continuity of the development of infrastructure with the mission of making information accessible to as many people as possible that drove me. It all clicked — I am able to help people change their world and change the world.
What advice would you give to women pursuing a career in technology?
Don’t be intimidated by tech, embrace it! We have an image that tech is not for women, and we need to debunk it, and change the narrative! Tech is the new raw material, the new language, the new code, the new toolset that you need to have. The pandemic is showing us how necessary the internet is to us. Five years ago would you have ordered your groceries from home, would you have thought possible to work from home for an entire year? We are living this revolution and it is up to us to harness the power of it and women, and men, both have their fair place in shaping the future and leading the way.