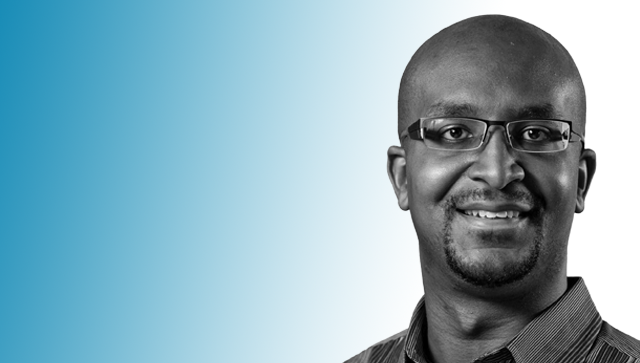 Editor's Note: For Black History Month, we're profiling some of the inspiring, dynamic and creative Canadian Black+ men and women at Google.

As a lifelong learner, Roger McFarlane’s curiosity introduced him to the world of computer science and fostered his passion for tech. Over the past 10 years, he’s brought his love for problem solving (or as he calls them ‘puzzles’) to Google — as a software developer for Chrome. And there’s a good chance you’ve used a feature or two that Roger helped bring to life — notably the handy feature that allows Chrome to automatically fill out forms with saved information, like your address or payment details, also known as autofill.

Born in Kingston, Jamaica, Roger immigrated to Winnipeg at the age of four and later moved to Montreal to continue his studies at McGill University. Throughout his life, he’s drawn inspiration from other successful people, always seeking lessons to learn and ways to draw from their success as he paved his own path. Today, he says pursuing an education in something you’re passionate about and making choices that open the most doors is something he hopes to instill in his two kids and others around him.

How would you describe your job at a dinner party to people who don't work in tech?
I solve puzzles. As a Senior Software Developer on the Chrome team (based in the Montreal office), I need to get the computer to do something or react to something in a certain way. As a part of my job, I have a wide array of tools at my disposal, but I need to arrange them in a certain way, similar to a puzzle, to make that action happen.

What’s your one secret power that makes you successful?
Curiosity. As a kid, I was curious about everything — science, physics, people etc. and my curiosity pushed me to discover the world of computers and continues to fuel what I do today.

So you mentioned curiosity led you to discover computers. Was there something or someone that pushed you toward a career in tech?
Absolutely! When I was around 12, I discovered computers and while I didn’t have a computer of my own, my cousin had a Commodore 64. I was fascinated. I quickly realized that I could control how they worked through programming and so I’d go to the library and get books with programs in them, then head over to my cousin’s to use his computer. As I continued to learn, I realized I could write and create my own video games.

From there, I knew I wanted to study computers. When I was in high school in Winnipeg, I was fortunate to have had an amazing science teacher, who also ran the newly created computer lab. He recognized my passion in computer science and gave me the materials, including software licenses to use with my home computer and to complete the Advanced Placement Computer Science curriculum on my own. And so when I went to McGill University in Montréal, I already had some credits completed.

What advice would you give to Black+ people pursuing a career in technology?
Continue learning and stay curious! Being a lifelong learner I constantly approach challenges as opportunities that can open new doors. Take advantage of these opportunities as they arise; they will broaden your knowledge, skillset and professional network.

Secondly, be open to taking risks. This will help you grow and learn from your mistakes.

And lastly, surround yourself with people who are similarly driven to be successful. You can learn a lot from your colleagues. Seeing someone's passion is a very cool thing and inspires me everyday.

What's the most challenging part of your job?
No matter what I’m working on, the biggest challenge is understanding the various needs and wants from our Chrome community. There’s a tendency for engineers, like myself, to think about the products we use in a certain way or to want products to do different things, but that’s not necessarily how our wider audience thinks. And so I’m often thinking about this.

What's the most rewarding part of your job?
It’s really simple! It’s knowing that every day there are billions of people who are using the features I created — including family and friends.

How do you hope to inspire the next generation of Black+ boys and girls as they start to explore their career interests?
I want them to see that they can not only be successful, but that they can thrive doing something they love. Learning from other people has always been integral to my success. I look around and see what does and doesn’t work for people and then apply those learnings to my own life.

As a Black person, you don’t always see yourself reflected in the industry that you want to join. This was true for me. I didn’t specifically have Black inspiration in software development growing up. I hope to inspire Black students to pursue a career in tech by seeing themselves represented, especially in senior positions.

The past year has shown how resilient we are — how are you continuing to rise?
Being self sufficient and responsible with the things I have is really important to me. The past year has really reinforced this. It’s important to always have a plan and make responsible choices that will keep doors open down the road. As a father, I want to set an example for my two kids and set them on a path to success.