Streak is a full blown CRM built directly into Gmail. We’re built on Google Cloud Platform (most heavily on Google App Engine) and we store terabytes of user data in Google Cloud Datastore. It’s our primary database, and we’ve been happy with its scalability, consistent performance and zero-ops management. However, we did want more functionality in a few areas. Instead of overwriting database entities with their new content whenever a user updated their data, we wanted to store every version of those entities and make them easy to access. Specifically, we wanted a way to make all of our data immutable.

In this post, I’ll go over why you might want to use immutable entities, and our approach for implementing them on top of Cloud Datastore.

There are a few reasons why we thought immutable entities were important. 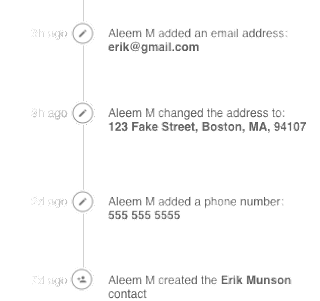 You can think of the Cloud Datastore as a key-value store. A value, called an entity in the datastore, is identified by its key, and the entity itself is just a bag of properties. There's no enforcement of a schema on all entities in a table so the properties of two entities need not be the same.

The database also supports basic queries on a single table — there are no joins or aggregation, just simple table scans for which an index can be built. While this may seem limiting, it enables fast and consistent query performance because you will typically denormalize your data.

How we implemented immutable entities

The versionId field is a globally unique identifier for each datastore entity. These IDs are automatically assigned by Cloud Datastore when we store the entity.

Here’s the same immutable entity defined in code. We use the awesome Objectify library with the Cloud Datastore and these snippets do make use of it.


So how do we perform common operations on logical entities given that they are backed by datastore entities?

When creating a logical entity, we just need to create a single new datastore entity and use the Cloud Datastore’s ID allocation to set the versionId field and the consistentId field to the same value. We also set the parent key (firstEntityInChain) to point to itself. We also have to set isTip to true so we can query for this entity later. Finally we set the timestamp and the creator of the datastore entity and persist the entity to Cloud Datastore.


— the datastore entity that represents the logical entity.

— we can just query by the consistentId and order by the timestamp. This will give us all versions of the logical entity. We can diff each datastore entity against the previous datastore entity to generate the data needed for a newsfeed.

We’ve only been running with immutable entities in production for a little while, and it remains to be seen what problems we’ll face. And as we implement a few more of our datasets as immutable entities, it will become clear whether the implementation costs were worth the effort. Subscribe to our blog to get updates.

If this sort of data infrastructure floats your boat, definitely reach out to us as we have several openings on our backend team. Check out our job postings for more info.


1This is very similar to the idea of MVCC (https://en.wikipedia.org/wiki/Multiversion_concurrency_control) which is how many modern databases implement transactions and rollback.