Our team's goal is simple: secure more than two billion Android devices. It's our entire focus, and we're constantly working to improve our protections to keep users safe.

Today, we're releasing our fourth annual Android security year in review. We compile these reports to help educate the public about the many different layers of Android security, and also to hold ourselves accountable so that anyone can track our security work over time.

We saw some really positive momentum last year and this post includes some, but not nearly all, of the major moments from 2017. To dive into all the details, you can read the full report at: g.co/AndroidSecurityReport2017

In May, we announced Google Play Protect, a new home for the suite of Android security services on nearly two billion devices. While many of Play Protect's features had been securing Android devices for years, we wanted to make these more visible to help assure people that our security protections are constantly working to keep them safe.

Play Protect's core objective is to shield users from Potentially Harmful Apps, or PHAs. Every day, it automatically reviews more than 50 billion apps, other potential sources of PHAs, and devices themselves and takes action when it finds any.

Play Protect uses a variety of different tactics to keep users and their data safe, but the impact of machine learning is already quite significant: 60.3% of all Potentially Harmful Apps were detected via machine learning, and we expect this to increase in the future.

Play Protect automatically checks Android devices for PHAs at least once every day, and users can conduct an additional review at any time for some extra peace of mind. These automatic reviews enabled us to remove nearly 39 million PHAs last year.

We also update Play Protect to respond to trends that we detect across the ecosystem. For instance, we recognized that nearly 35% of new PHA installations were occurring when a device was offline or had lost network connectivity. As a result, in October 2017, we enabled offline scanning in Play Protect, and have since prevented 10 million more PHA installs.

Play Protect also doesn't just secure Google Play—it helps protect the broader Android ecosystem as well. Thanks in large part to Play Protect, the installation rates of PHAs from outside of Google Play dropped by more than 60%. 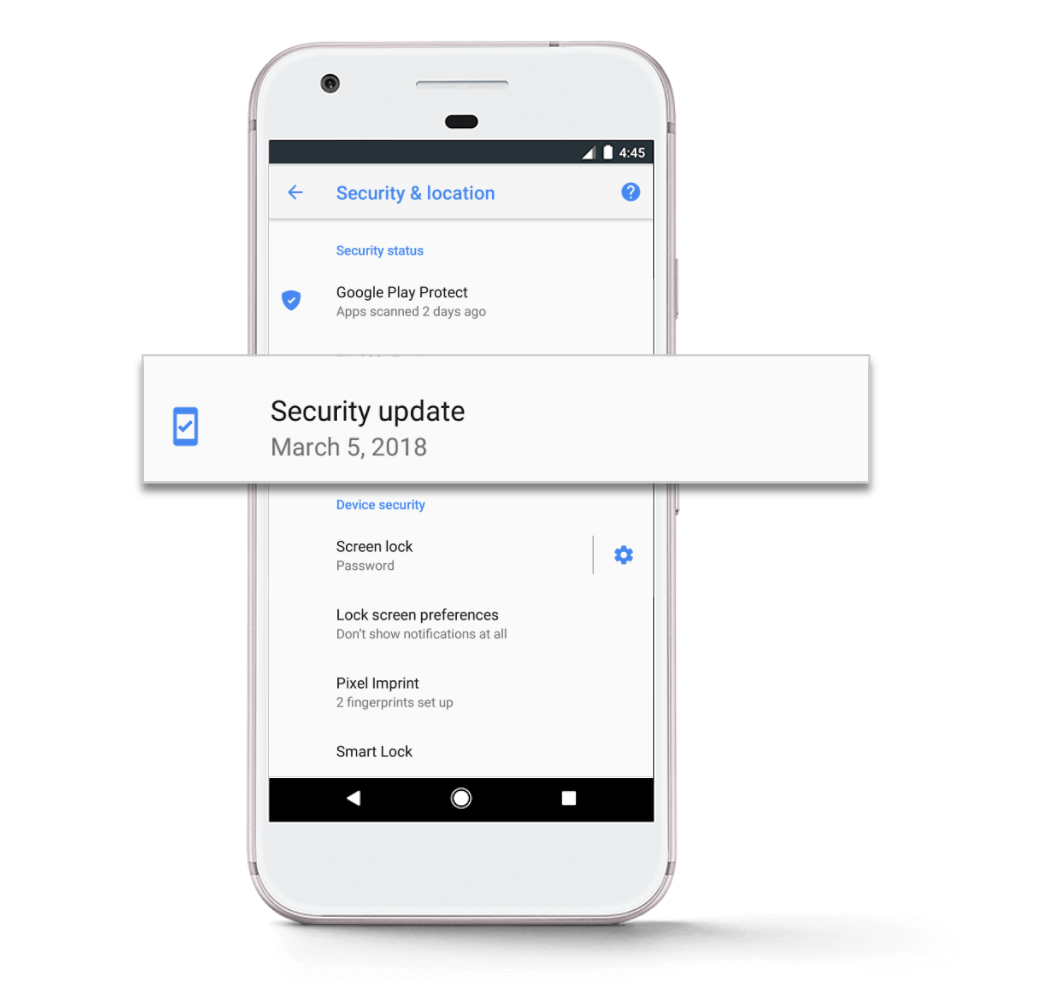 While Google Play Protect is a great shield against harmful PHAs, we also partner with device manufacturers to make sure that the version of Android running on user devices is up-to-date and secure.

Throughout the year, we worked to improve the process for releasing security updates, and 30% more devices received security patches than in 2016. Furthermore, no critical security vulnerabilities affecting the Android platform were publicly disclosed without an update or mitigation available for Android devices. This was possible due to the Android Security Rewards Program, enhanced collaboration with the security researcher community, coordination with industry partners, and built-in security features of the Android platform.

We introduced a slew of new security features in Android Oreo: making it safer to get apps, dropping insecure network protocols, providing more user control over identifiers, hardening the kernel, and more.

We highlighted many of these over the course of the year, but some may have flown under the radar. For example, we updated the overlay API so that apps can no longer block the entire screen and prevent you from dismissing them, a common tactic employed by ransomware.

We've long said it, but it remains truer than ever: Android's openness helps strengthen our security protections. For years, the Android ecosystem has benefitted from researchers' findings, and 2017 was no different.

We continued to see great momentum with our Android Security Rewards program: we paid researchers $1.28 million, totalling more than two million dollars since the start of the program. We also increased our top-line payouts for exploits that compromise TrustZone or Verified Boot from $50,000 to $200,000, and remote kernel exploits from $30,000 to $150,000.

In parallel, we also introduced Google Play Security Rewards program and offered a bonus bounty to developers that discover and disclose select critical vulnerabilities in apps hosted on Play to their developers.

Our teams also participated in external vulnerability discovery and disclosure competitions, such as Mobile Pwn2Own. At the 2017 Mobile Pwn2Own competition, no exploits successfully compromised the Google Pixel. And of the exploits demonstrated against devices running Android, none could be reproduced on a device running unmodified Android source code from the Android Open Source Project (AOSP).

We're pleased to see the positive momentum behind Android security, and we'll continue our work to improve our protections this year, and beyond. We will never stop our work to ensure the security of Android users.